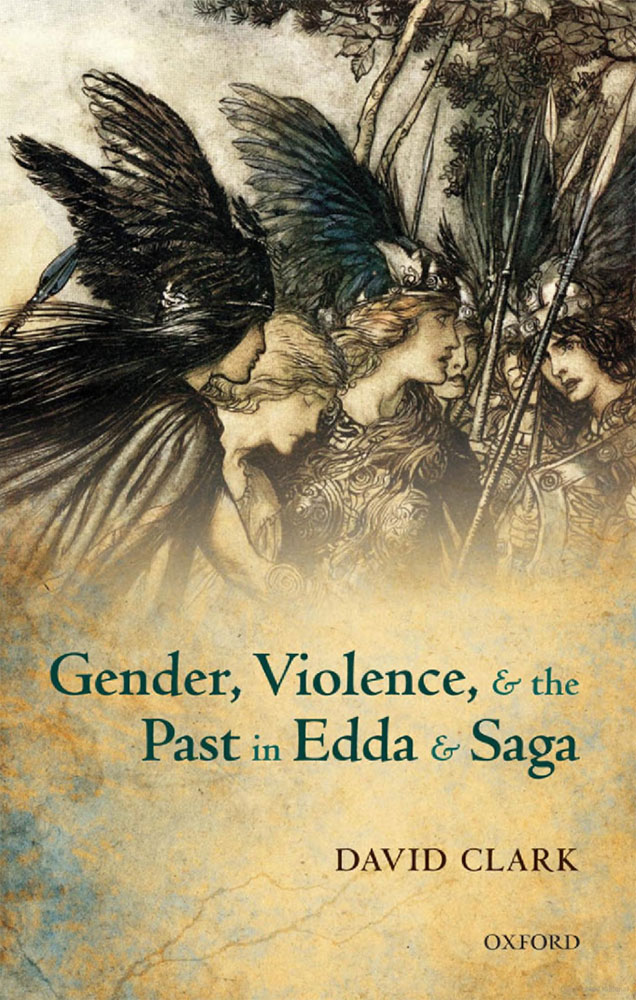 David Clark is a lecturer in Old English at the University of Leicester and this book considers the intersection between gender and violence in both the Poetic Edda and heroic sagas. Gender, Violence, and the Past in Edda and Saga is not a book made from whole cloth, and brings together writings that have previously appeared, in earlier versions, as articles in a variety of publications familiar to the field, including the Viking Society for Northern Research’s Saga-Book, the Journal of English and Germanic Philology, Leeds Studies in English, Scandinavian Studies, and Viking and Medieval Scandinavia. That isn’t to say that the work as a whole feels piece meal, and each piece does build upon the other, beginning first with considerations of revenge in the stories of Guðrún and Helgi Hundingsbani. Clark prefaces these explorations in his introduction with a broad summary of Eddaic literature in general, and the areas to be discussed in particular, providing something of a necessary primer for the uninitiated.

Clark uses several theoretical models throughout his book, calling upon Pamela Robertson in the first chapter’s discussion of violence in the Guðrún poems Atlakviða, Atlamál, Guðrúnarhvöt and Hamðismál. Robertson’s consideration of camp, drag and gender parody, as it particularly applies to women who performatively portray other women, is applied to the depiction of Guðrún as someone who is atypically female in her actions. This has led to questions as to whether Guðrún is viewed sympathetically and heroically, or as an anti-feminist scapegoat, but Clark’s use of Robertson’s model allows her to be autonomous, possessed of her own destiny as someone who plays with perceptions of her sex in a female act of female impersonation. 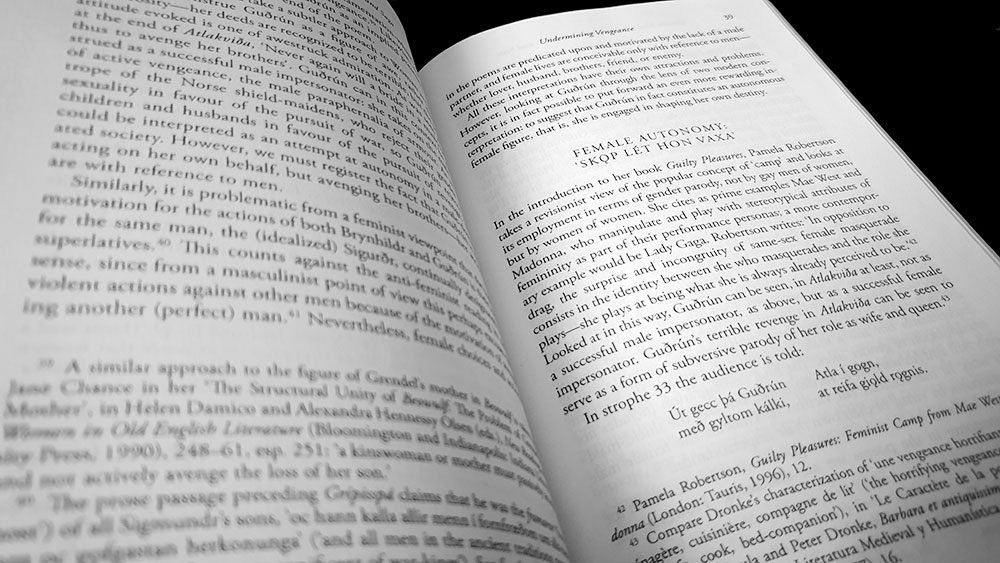 Clark employs a different theoretical model in the second chapter, invoking Eve Sedgwick’s concept of homosocial desire in its consideration of flyting in the Helgi poems: the first and second lays of Helgi Hundingsbani as well as the second lay of the other Helgi, Mr Hjörvarðsson. Sedgwick’s model of homosocial desire, in which a society is structured around male relationships that must then be normalised by intense homophobic discourse acting as a form of validation, finds an easy parallel in the Helgi poems. Most notable of these is the flyting exchanges between Guðmundr and Sinfj?tli in Helgakviða Hundingsbana I, with each man belittling the other with ribald accusations of ergi behaviour, though notably casting themselves as the dominant partner in these zoomorphosised sexual interactions with each other: Sinfj?tli says that he and Guðmundr were the parents of wolves, though he alone was the father, while Guðmundr says that he had ridden Sinfj?tli hard for many miles, whilst the latter was a gold-bitted mare. The one element of Sedgwick’s theory missing in its purest application here is the triangular model, in which this homosocial desire occurs in situations involving two men and a woman, the two usually fighting over the latter. As Clark notes, this model requires some adjustment to fit the cases outlined here, in which the desire for the sexual object is not always the primary motivation, such as Dagr in Helgakviða Hundingsbana II whose concern is revenge and the reappropriation of his sister Sigrún. Similarly, the conflict between Guðmundr and Sinfj?tli expands the geometry of the model here, thereby changing the dynamic, with their flyting being in service of their respective brothers, Höðbrodd and Helgi.

The fourth chapter moves away from direct theoretical models with a consideration of the way in which the themes of many of the heroic poems and in particular Hamðismál mirrors descriptions of Ragnarök, with the works providing a near constant invocation of the end of the world and its portents. Clark draws attention to the way in which kin-slaying and revenge is depicted in Völuspá, not just as one of the qualities of the end times but as something seen in the prelude to Ragnarök, where Loki causes the death of Baldr at the hands of his brother Höðr, whose own death at the hands of his newly-born brother, Vali, continues this cycle of fratricidal violence. Literary allusions to the themes of Ragnarök within the heroic poems, thus, convey a similar sense of an all-pervading and inevitable doom, creating a simulacrum of the divine end of the world that the mortal heroes then inhabit. 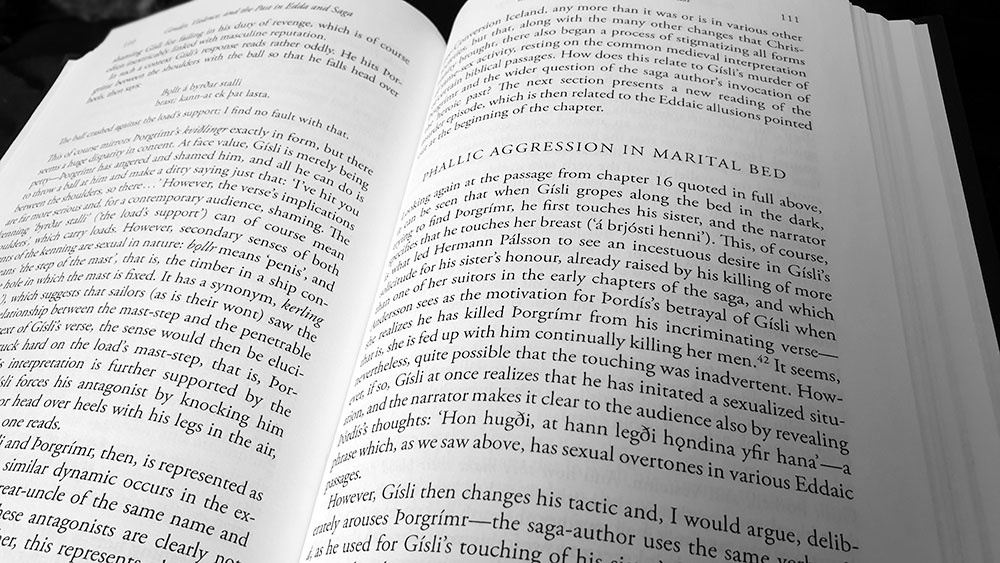 The themes of nid and ergi found in earlier chapters recur in a consideration of sexual themes and conceptions of the heroic past in Gisla saga, which asks once again a constant question found throughout this book with regard to the intent and judgement of the various authors in their depiction of revenge: is it admirable, or something barbaric, perhaps embarrassing, belonging to the past? Arguably the starkest positioning of this question is found in the fifth chapter’s discussion of the uneasy balance between, shall we say, the inherent tendency towards vengeance and bloodshed of pre-conversion Scandinavia and the slightly less heavy on the old revenge message of Christ. Clark documents several instances of the bind priests were in when trying to advocate for the latter over the former, noting that as celibate men adverse to pugnacity and proffering peace, they were vulnerable to charges of ergi, so contrary were they to Germanic ideas of masculinity.

The book concludes with a discussion of the role of women in revenge scenarios in the sagas, specifically as inciters of vengeance and offerors of cold council, as Njals saga terms it. This is principally a rebuttal of Jenny Jochen’s Old Norse Images of Women, in which it is argued that the literary stereotype of the vengeful women reflected a historical reality. Clark suggests otherwise, preferring ambiguity where others might be categorical, noting several contrary examples from the historical sagas, such as Sturlu saga, in which women also appear as anti-inciters.

Gender, Violence, and the Past in Edda and Saga runs to about 180 pages and is bound in a glossy black cloth, titled foiled in gold on the spine, and wrapped in a full colour dust jacket, featuring a detail from Arthur Rackham’s The Rhinegold & the Valkyrie. With its page count and octavo size, this feels deceptively like a slight volume, but Clark’s writing is dense and thorough, providing an intense and welcomed look at his subject matter.