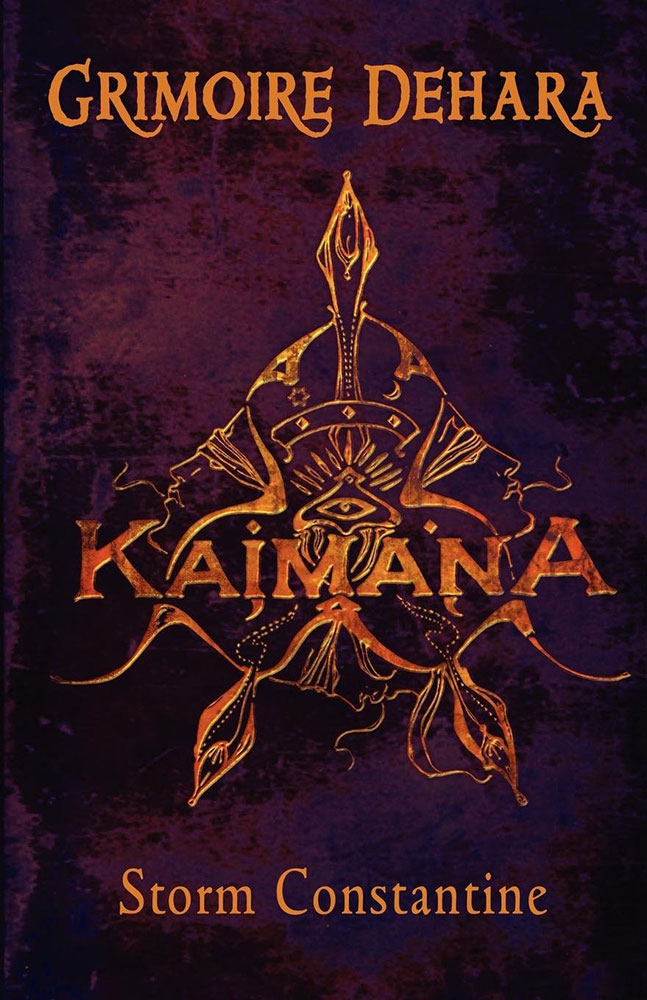 As an unrepentant bibliophile, it is both a blessing and a curse that there are so many wonderful (and not so wonderful) books out there that must be read. One area that always takes a back seat is fiction, and so despite having a few of her titles in the shelves here at the hallowed halls of Scriptus Recensera, we’ve never had the pleasure of diving into the worlds of Storm Constantine.

Perhaps the work for which she is best known, her Wraeththu series, had its first instalment in 1987 with The Enchantments of Flesh and Spirit and has continued into this decade; although Constantine wrote her earliest Wraeththu tales a decade earlier in 1973. The Wraeththu are very much a race for today, a post-apocalyptic, hermaphroditic species that evolved from humanity and are divided into tribes. Androgynous and sensual, they seem to be cut from the same cloth as Anne Rice’s fey and elegant vampires, or Poppy Z. Brite’s queer outsiders.

With Grimoire Dehara: Kaimana, Constantine takes the system of magic used in the Wraeththu universe and fleshes it out for real world application. In a subculture of made-up magical systems, with people desperately trying to claim mysterious provenance for their fictions, what better than a system that is unashamedly fictional? As such, and as Constantine notes, Grimoire Dehara follows a chaos magick template of pop culture sorcery, creating new thought-forms with that slightly scientific, partly Jungian bent of any Chaoate. This is borne out by the resources at the end of the book, with two books by Phil Hine being the only other titles namechecked amongst those from Constantine herself and her collaborator Taylor Ellwood. There are also bonus points for the musical recommendations here, with Constantine suggesting Ephemeral from Synaesthesia and two albums by Steve Roach (The Magnificent Void and with Byron Metcalf, The Serpent’s Lair). Fine tastes and something that makes for a great reviewing accompaniment.

The gods of the Wraeththu are the Dehara of the grimoire’s title, with the principle deities being Aruhani (dehar of sex and procreation, life and death), Agave (warrior dehar of fire), Lunil (dehar of the Moon, love and spirituality) and Miyacala (dehar of inception, magic and wisdom). In addition there are elemental and seasonal deities called dehara vegrandis, and egregore forms created for specific and limited purposes called dehara demitto. Given the grimoire’s title, the dehara not unexpectedly form the focus of much of this book, with Constantine introducing each of them with descriptions and sigils, which she also does for their respective etheric nayati (temple or ritual space with descriptions and their sigils for them). With these are full page illustrations of each dehara, all evocative, beautiful and mysterious. Later in the book, Constantine returns to the dehara once more, providing further information along with extensive invocations and guided visualisations for each; and repeating the full page illustrations, which I’m not too sure about.

Having not read any of the Wraeththu novels before, one feels one’s self at a slight disadvantage when it comes to the terminology and names. There is an alienness to the language, that makes it hard to remember which term means what. This is due to it not necessarily having any resemblance to touchstones such as the Romance or Germanic languages, those two most common families for European ears. If anything, it bears a superficial resemblance to Eastern Polynesian languages like Hawaiian, with distinctly Polynesian phonemes appearing in words such as kaimana, rehuna and aruhani. At the same time, a preponderance of the letter ‘j’ and a ‘hahn’ sound in other words draws a comparison with Hindi; while in some cases, English portmanteaus occur, incorporating terms such as ‘tides,’ and somewhat breaking the feeling of exotic otherness. Suffice to say, the seven page glossary at the back proves a frequently frequented friend in the early stages of reading as one acclimatises to the new terminology.

At 200 pages, Grimoire Dehara: Kaimana presents an impressively rich and detailed system that builds gradually in complexity. For anyone familiar with contemporary magic, and in particular the techniques associated with its Chaos forms, there won’t be much here that is, at its core, unfamiliar, with the innovation coming from how it’s integrated into the Wraeththu mythos and paradigm. And, as one would expect of a system quite consciously created with all the benefit of several thousand years of precedents, there are certain near universal themes that are given a Wraeththu twist. Agmara, for example, is the name given to breath, both the breath of the divine and the breath of the practitioner, which like prana in Hinduism, or the Force in Star Wars, is an all-permeating, universal energy, that is a powerful ally. Life creates it, makes it grow. Its energy surrounds us and binds us. But I digress. 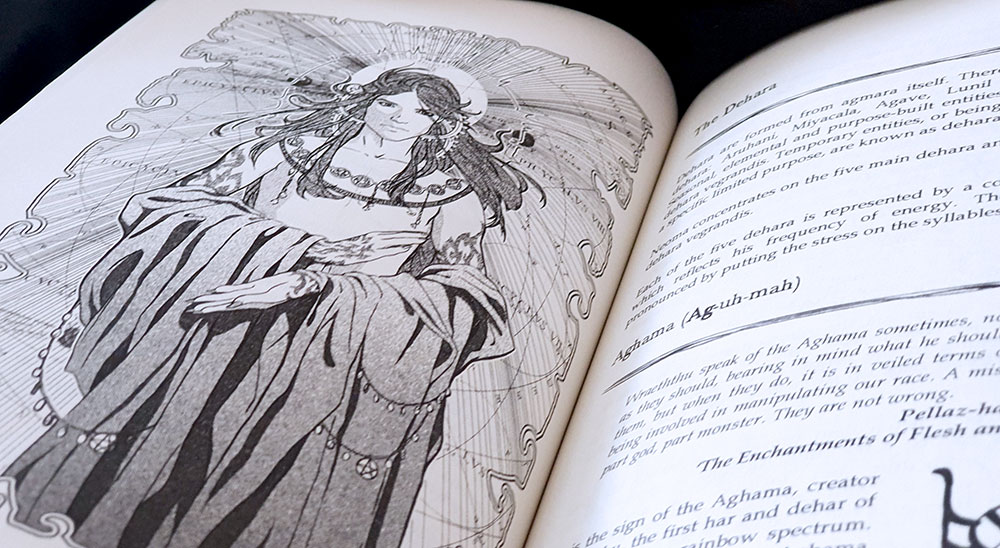 The system begins with an initiation with a particularly Wraeththu spin, being a visualisation based on what in the novels is called Inception, where a human is transformed into a Wraeththu through the infusion of their blood. In the initiation ceremony, called a Harhune, the practitioner imagines themselves transforming into the androgynous har body, creating an ethereal body that is then used for any subsequent majhahns (rituals). Following on from this initiation, Constantine presents a series of exercises and procedures that could be broadly said to involve ritual breathing, visualisations and pathworkings, and light work. Practitioners add to their ethereal arsenal with the creation of their own hienama (an egregoric teacher), the building of an etheric nayati ritual space, and the development of minor Deharan magical entities for specific purposes.

In addition to this more personal work, Constantine provides evidence of her world building with Arotahar, a harish Wheel of the Year, that incorporates a grand seasonal mythologem redolent of European harvest rites for dying and resurrecting gods, and features eight arojhahns (festivals) across the year. Each arojhahn has invocations, rituals and visualisations associated with it, making this section, along with dedicated sections working with the dehara, the lion’s share of the grimoire. For those willing to embrace the mythos and modality, there’s a lot to do, with a full ritual year to follow, and the pantheon of the main dehara creating a comprehensive set of entities to engage with. 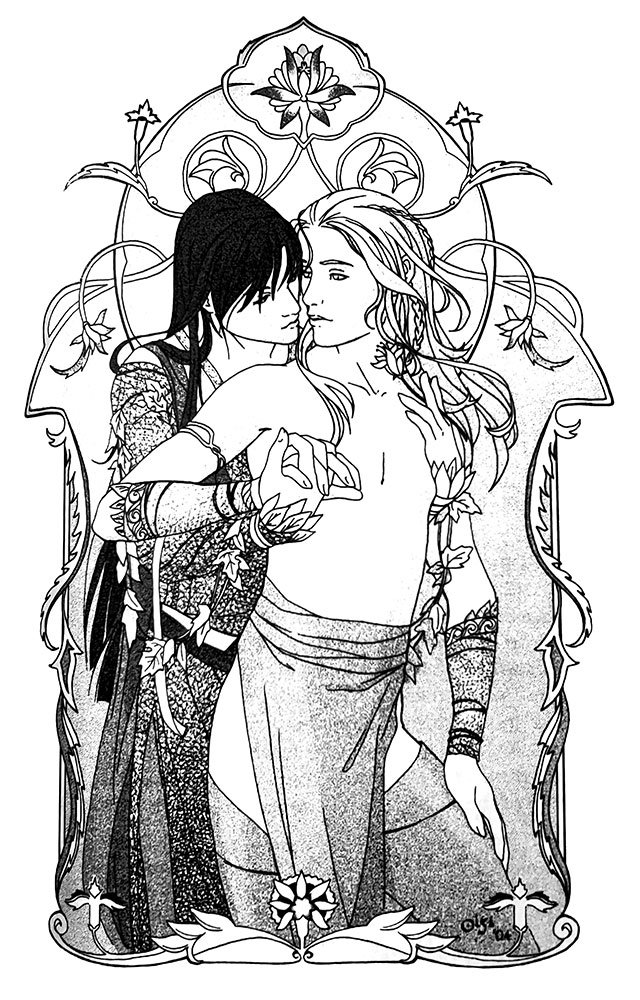 Grimoire Dehara: Kaimana is thoroughly illustrated throughout with images of the various dehara and their attributes. Created by Olga Ulanova, they in some ways make the book, providing a very clear visual sense of what the dehara look like and explicating the whole Wraeththu aesthetic. The images often have an icon-like quality to them, something engendered by the use of an Art Noveau style, with Alphonse Mucha being a particularly obvious reference; as is often the case. No slavish imitation, though, these are beautifully rendered in simple clear lines, with the figures sometimes set against clear space, but more often against decorative, esoterically-evocative backgrounds and frames, occasionally suggesting, to my eyes, stellar cartography. As devotional objects, these would work effectively in any Deharan praxis, such is their strength as numinous images.

The first version of Grimoire Dehara: Kaimana was first released in 2005 as a hardback edition, with this second edition from 2011 being a trade paperback. Constantine has since followed up Kaimana with two sequels to this grimoire, both in collaboration with Taylor Ellwood: the second book Ulani 2016, and the third, Nahir Nuri, in 2017. Both sequels are available in hardcover and paperback versions, with a new limited edition hardcover version of Grimoire Dehara: Kaimana also being released to match its scions.

Published by Megalithica Books, an imprint of Immanion Press