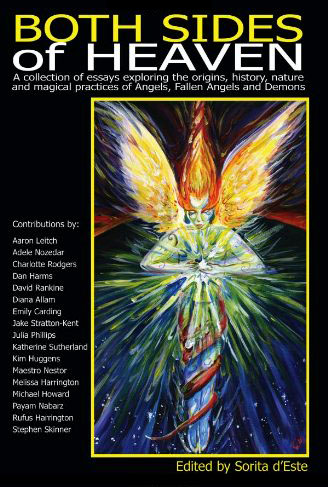 Avalonia’s Both Sides of Heaven is a collection of essays on angels, fallen angels and demons that suggests that, were the contributors made to choose, it would be the darker side of heaven on which they would sit. There is a preponderance of pieces exploring the fallen angels, whereas their heavenly counterparts are only occasionally present, but such is the dark glamour of the fallen ones that this is, perhaps, inevitable.

With eighteen contributions, there is a wide range of material here, and as one would expect, it is of varying quality and worth. Some of the highlights include Kim Huggens’ Between Gods and Men, a survey of the idea of daimons from a cross section of classical source, while a similar mytho-anthropological approach is taken by Payam Nabarz in a consideration of the angels and demons of Zoroastrian cosmology. Both pieces are well written and thoroughly referenced, making them a joy to read.

There are also strong contributions from Michael Howard and David Rankine. Howard’s The Myth of the Fallen Ones is effectively a summary of the material from his books The Pillars of Tubal Cain and The Book of Fallen Angels, while Rankine gives an overview of the goetic spirits that appear to be fallen angels. In Madeline Montalban, Elemental and Fallen Angels, Julia Philips covers similar material to Howard, although there is substantially less about Montalban than you would have expected based on the title, being limited to a few paragraphs.

On the weak side are pieces like Diana Allam’s Azazel & Shemyaza: Sex, Drugs & Rock ‘n’ Roll, which is a measly two page reflection on how they see Azazel (apparently as “every female’s fantasy in one package;” how wonderfully essentialist) and to a lesser extent, Shemyaza, who they see as a father figure; providing psychological insights I wasn’t really looking for. Adele Nozedar’s Thirteen Unicycles in the Woods is also unsatisfying, using five pages to give a personal account of seeing an angel and a demon in the wild; an anecdote that may be fine as something to tell like a ghost story around a campfire but one that feels lacking in any relevance or insight for a greater audience. Some of the other pieces are distinctly amateurish and entry level, such as Demons and Devils from the peculiarly-named Maestro Nestor. This is a rambling summary of demonology that is punctuated with personal recollections about how they once contemplated summoning a demon to do housework (they thought better of it because it would have been “just too disrespectful”), and how they made a pact with Satan, which they managed to break thanks to a ritual from Arthur Waite’s Book of Ceremonial Magic; phew, that was lucky. Equally rambling is Fallen Angels and the Legends of the Fall, subtitled a rather human perspective, in which author Rufus Harrington’s day job as a Consultant Cognitive Behavioural Psychotherapist appears to have given him the skill to write for several pages without actually saying much.

Less egregious but still irritating is Aaron Leitch’s The “Enochians,” which promises to show you the true identity of the angels of Dr. John Dee. Unfortunately, Leitch bases his piece on a false dilemma, arguing that occultists favour the exotic Enochian angels that Dee and Kelley encountered as they delved deeper into their system and that they have wilfully ignored the more familiar angels with which Dee worked. For Leitch, the true identity of the angels is just the archangels that Dee, as a student of western occultism, summoned and encountered at the beginning of his experiments: Gabriel, Uriel, Michael and Raphael. So that’s no great revelation and the fact that another piece in this volume, On the Wings of Rebirth by Katherine Sutherland, specifically discusses Dee’s work with these angels suggests that Leitch’s idea of some occult cover-up to hide Dee’s conversations with conventional angels  is vastly overstated.

As is obvious, the problem with this volume is the disparity in the quality of  contributions and contributors. Pieces that have an even mildly academic approach outshine the more personal anecdotes that offer nothing but unwelcome insight into the none-too-flattering mindset of some magickal practitioners.  With some quality control, the eighteen contributions could have been whittled down to make a slimmer but more satisfying volume. As with all Avalonia releases, this book is competently formatted and printed, and the reasonable pricing means that despite the chaff, there’s no reason not to buy this for what wheat there is.