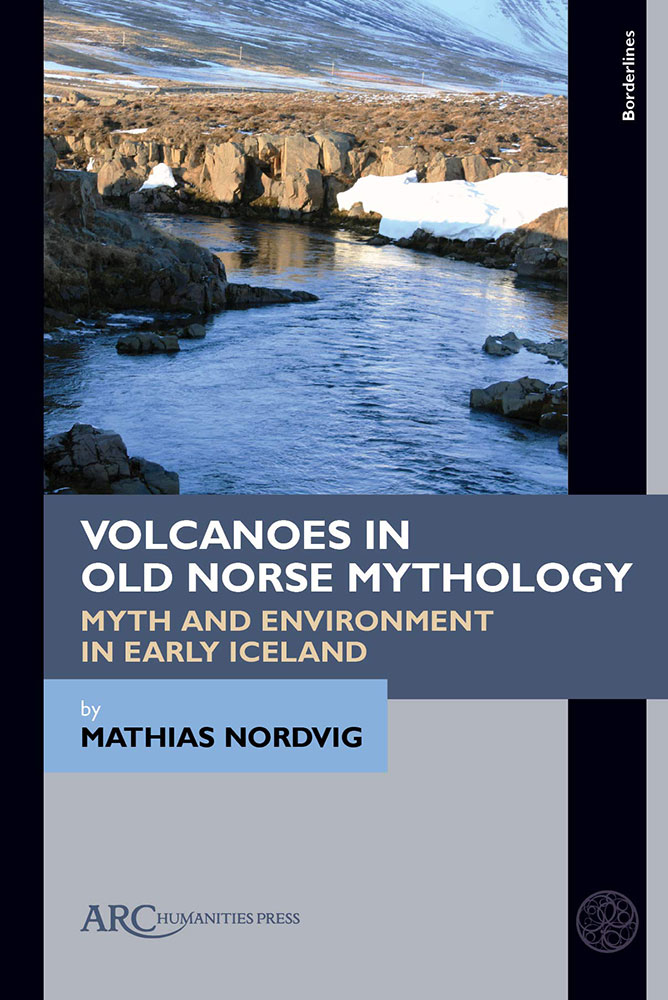 This book from Mathias Nordvig provides a full exploration of an idea he first presented in 2014 as a PhD dissertation called Of Fire and Water. The Old Norse Mythical Worldview in an Eco- Mythological Perspective, and which he has subsequently promoted in smaller essays, including one in the recently reviewed Handbook of Old Norse Memory Studies: Interdisciplinary Approaches from de Gruyter. As the title suggests, the focus here is on volcanism, and in particular the intersection between its physical presence in the landscape of Iceland and the topography of Norse mythology. Nordvig’s argument is that volcanoes and their effects had an outsize influence of the imagery found in the eddas and skaldic poetry, with the latter being used by Scandinavian migrants to medieval Iceland in order to understand and negotiate the unfamiliar geological hazards of the island. With the post-conversion growth of writing, and all the editing that is intrinsic to it, this world-view became codified in myth. In this way, Nordvig argues that Norse mythology is an indigenous expression of life in Iceland which has been emplaced in a Latinate script-world.

Volcanoes in Old Norse Mythology is significantly shorter than its dissertation forerunner, being largely divested of the academic necessities of the latter, such as literature reviews and overly-long explanations of theoretical frameworks and methods, but it does not come across as simply a reworking of the latter for a wider audience. Instead, while the ideas are the same, they provide the only through-line between the two works, with a sense of this book being built from scratch, rather than a mere editing down of a thesis with some finessing for publication.

Following a brief introduction, Nordvig begins with Old Norse Mythology Between Environment and Literature, in which he argues that Old Norse mythology is social memory that has direct reference to the world surrounding the texts, drawing comparisons from other cultures around the world in which a people’s myths, legends, and folktales can be instructive for understanding the environment in which they live. A large part of this chapter does not relate directly to the volcano theory and instead is an engaging discussion of concepts of memory and place both in Old Norse society and elsewhere. Key to this approach is Elizabeth W. Barber and Paul T. Barber’s book When They Severed Earth from Sky: How the Human Mind Shapes Myth, which Nordvig references extensively as his ideas mirror their approach to interpreting environment as a mytho-linguistic practice. The Barbers define four principles in this practice: silence (things that everyone takes as read), analogy (if any entities or phenomena bear some resemblance, in any aspect, they must be related), compression (once a theme achieves sufficient mass, it attracts more stories to it), and restructuring (significant cultural change means that some patterns in the theme will be restructured or reinterpreted, leading eventually to obfuscation). This, then, is effectively, Nordvig’s summary of his methods, though he is not entirely beholden to the Barbers’ model, stating that unlike them, he does not intend to define environmental factors as etiological reasons for mythogenesis, critiquing them for painting with broad strokes and attaching geologic meaning to myth where it is not warranted, Nordvig promises to avoid similar post hoc fallacies, saying that he will not claim that all aspects of Old Norse mythology are associated with environmental conditions.

Nordvig then presents his indigenous theory of volcanism in Iceland, using the poem Hallmundarkviða from the story Bergbúa Þáttr as his central and foundational piece of evidence. It’s pretty convincing too, with the poem describing an event in a cave where the arrival of a giant appears to be an anthropomorphised depiction of a volcanic event in which stones fly, dark flames drive and spit, embers shoot, raging streams rush in heavy rubble, and strange new clay flows from the ground. Even without any exegesis from Nordvig, it’s clear to see how this igneous imagery fits his thesis, but he does expertly consolidate this conclusion, drawing upon the concept of geomythology to create parallels with indigenous theories of volcanism from Hawai’i, Aotearoa, Indonesia, North America, and the European and African continents. While Elizabeth and Paul Barber’s book was pivotal to the first chapter, it is Dorothy B. Vitaliano’s Legends of the Earth that naturally assumes that role here, with her coining the phrase geomythology and defining it as the geologic application of euhemerism. Vitaliano argues that etiological folklore has given rise to stories about geological phenomena and her considerable focus on volcanism provides mythological context to volcanic phenomena in Polynesian myth and elsewhere that finds comparisons in Old Norse mythology. Of particular interest are the shared motifs attached to volcanism, with themes of taboo, supernatural anger, and most intriguing of all, ghostly ships, occurring in myths from across the world. It is at this point that Nordvig turns to Hallmundarkviða, showing many of the same themes within that Icelandic poem.

In the third chapter, Nordvig gets to the titular application of his theory, looking for further depictions of volcanism in the broader vistas of Old Norse cosmogony. This pyroclastic evidence is often veiled with the poetic language of myth in which, following the Barbers’ approach,  analogies occur between lava, ash, glacial bursts, ice, water, poison, snow, and sand. Nordvig’s focus in this chapter is entirely on the Old Norse creation myth, arguing by way of the use of these poetic analogies that the streams of ice and eitr in the myth refer not to anything icy but to streams of lava and other results of volcanic activity. But what is presented here never seems to be quite as convincing as the anthropomorphism found in Hallmundarkviða.

In the fourth chapter, Nordvig explores his thesis in terms of what he defines as the social order of Old Norse mythology, applying it to significant mythological events, most notably the story of the mead of poetry, which is dissected exhaustively, as well as Þórr’s duel with the giant Hrungnir. In the concluding fifth chapter, Nordvig effectively provides a summation of what he has covered before, underscoring his idea of volcanoes as a cosmological principle in Old Norse mythology and in the societies in which it informed their world view.

The examples that Nordvig uses to validate his volcano theory vary in how convincing they are, often coming across as circumstantial and tenuous in their use of allegory. Nordvig attempts to pre-empt this criticism by defining his theory as specifically not a nature mythology, be it in the vein of the nineteenth century natural allegory model or its contemporary incarnation as geomythology. Instead, Nordvig argues that his analogical descriptions are valid because multiple factors occur simultaneously. What constitutes a convincing factor is open to interpretation, and fundamentally, everything that is presented still feels like nothing more than a reiteration of myth as natural allegory, with so thorough a descent into the theory that almost anything in myth can be related to volcanic imagery, even when there’s little to no hint of it. Thus, any description of dwarves groaning becomes the sound of subterranean rumblings, and anything that lives in a mountain or in the underworld must somehow be related to volcanic phenomenon. Some of the examples are more convincing than others because they draw on chthonic and alpen imagery, such as the mead of poetry myth in which Óðinn enters the mountain home of the giant Suttungr and his daughter Gunnloð. In this instance, the mead that Óðinn steals as he bursts forth from Hnitbjörg is imagined as a flow of lava, which is a pleasant enough conclusion, albeit one that still feels circumstantial.

At the same time, though, a significant amount of time is also spent here discussing Hrungnir, a rock giant without so much as a sulphurous whiff of a lava flow about him. The reaching to find any correlation becomes exasperating when surely the creators of the myth could have just imagined a cool looking rock giant, because giants and rocks are cool; and it’s handy to have an imagination that can create imagery ex nihilo when your job is being a storyteller. It’s not even about whether Hrungnir could symbolise a volcano, which could be the case if the imagery at least fitted, but rather the insistence that someone looked at a volcano and imagined it as a giant; and not only that, but looked at a volcano and imagined its attributes as the explanation for almost anything else in myth. Suffice to say, it’s a case of an interesting theory that works in some instances but is then enthusiastically and injudiciously applied in an overreaching scattergun effect, much like earlier nature allegories in which everything was theorised to be a sun god or a harvest myth. This reaching for connections can get to ridiculous levels, such as when it is argued that the admittedly puzzling interpretation of Gunnloð’s name as ‘invitation to battle’ fits with “the conceptualization of volcanic activities as violent,” when maybe battle just means battle, as it does every other time a battle is a battle. It seems unlikely anyone has ever looked at a volcanic eruption and gone “Cor, you see that, it looks just like a battle, what with all the flaming ejecta and lava, and a distinct lack of swords. Imagine being invited to that.”

The other problem with the idea of multiple factors occurring simultaneously in order to confirm the volcano theory is when multiple other environmental factors occur but which don’t seem to have had any effect on the myth. Thus, while its superficially appealing to imagine a ruddy flow of lava emerging from the earth as the mead of inspiration, that’s pretty much where the analogy ends. There’s nothing in myth about the mead searing someone’s throat when they recklessly swallowed it, or it hardening into igneous rock in someone’s stomach, or indeed being deadly and very burny for entire villages.

None of this is too say that there isn’t anything to recommend about Volcanoes in Old Norse Mythology: Myth and Environment in Early Iceland. Nordvig writes with an enjoyable and knowledgeable style and he by no means skimps on the evidence when making his arguments. Indeed, the thoroughness of it all is what contributes to the feeling of confirmation bias as it use of allegoric minutiae shores itself up in a way that prevents you from seeing, if you will pardon the inversion, the trees for the wood (or their volcanic equivalent). Even if one finds, as this reviewer obviously does, that the volcanic theory is applied to easily and too thickly, Nordvig’s analysis of the myths themselves is worth the price of entry, as he draws widely from Norse scholarship to present a comprehensive consideration of his sources, and in particular, the creation myth, the mead of poetry myth, and the Hallmundarkviða poem.