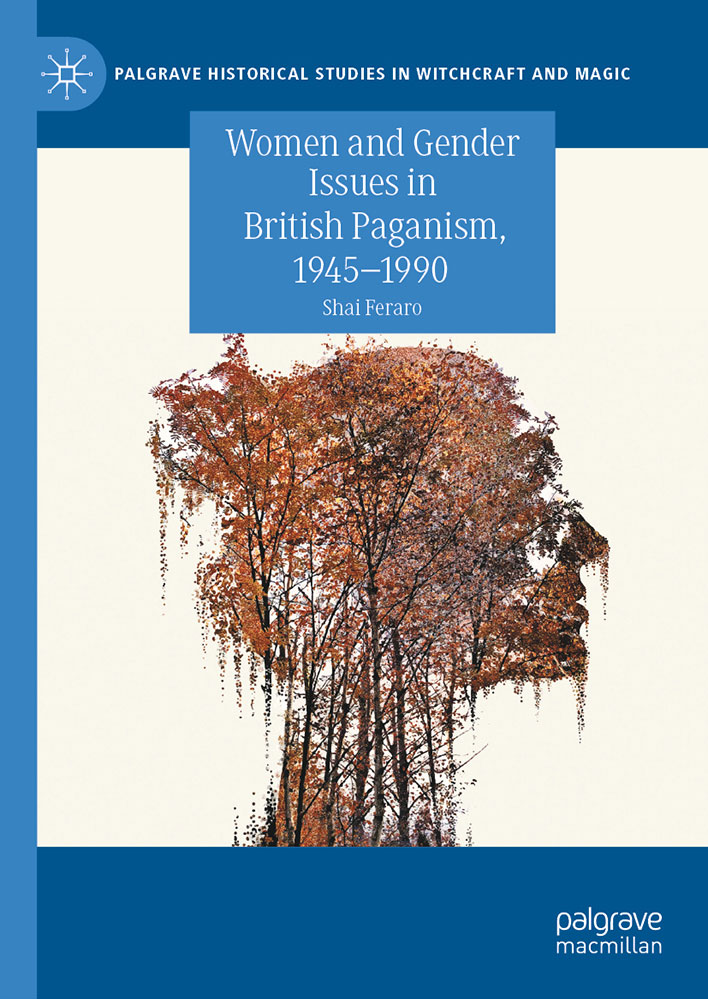 Part of the Palgrave Historical Studies in Witchcraft and Magic series, the appeal of a book like Shai Feraro’s Women and Gender Issues in British Paganism, 1945–1990 is its focus on a relatively recent period of history, something that for some of us is within living memory. It also mines themes of women and gender that, despite the centrality of goddess imagery in contemporary Wicca and witchcraft, has been little explored specifically, with Feraro considering in particular the reaction in Britain to both second-wave feminism and the emergence during the 1970s and 80s of goddess spirituality and feminist interpretations of witchcraft.

Feraro is an Adjunct Lecturer at Oranim College of Education, Israel, and has published with Palgrave in the past, editing the anthologies Contemporary Alternative Spiritualties in Israel in 2016, and, in celebration of the twentieth anniversary of Ronald Hutton’s The Triumph of the Moon, 2019’s Magic and Witchery in the Modern West. Feraro’s own contribution in the latter anthology, titled Playing The Pipes of Pan: Pagans Against Nukes and the Linking of Wiccan-derived Paganism with Ecofeminism in Britain, 1980-1990, considers many of the ideas that he expands upon here, and anyone who has read the latter will come across familiar beats, and yes, familiar phrasing, in this more comprehensive title.

Feraro writes in an immensely readable style that is accompanied by an easy and sympathetic familiarity with his subject matter, displaying none of the anthropological tourism one might expect from something such as this with its roots in academia; and which began as a dissertation completed at the University of Tel Aviv in September 2016. He includes extensive footnotes throughout, not just citing sources but providing additional information that makes them required reading alongside the main text.

Feraro begins at the beginning, providing, as an introduction, a condensed review of British Wicca and witchcraft, as well as the general Victorian occult milieu of Theosophy, Thelema and the Golden Dawn’s Hermeticism from which they emerged. This gets more specific in the second chapter when the focus turns entirely to Gerald Gardner and Alex Sanders, providing a survey of the former’s familiar biographical journey from a creator of witchcraft-tinged fiction to the creator of a fiction-tinged witchcraft. Feraro places Gardner within his time, noting that influences that left their mark in the creation of his nascent Wiccan liturgy, including Margaret Murray and Aleister Crowley, but not Dion Fortune, despite an intersection of themes and ideas. Prescient to the gender themes of this book, Gardner imagined witchcraft as the descendent of a matriarchal Stone Age in which men were hunters and women stayed at home “making medicine and magic,” and as Feraro documents he wouldn’t be the last person in witchcraft to detail a history based simply on what they imagined/hoped might have happened.

Despite his veneration of a goddess and the role given to the priestess in his witchcraft, Gardner’s feminism was something of a half-measure or token gesture. Both he, Sanders and many of their respective students believed that a priestess in witchcraft wielded great power, but that this power was only granted to them, oh so graciously, by the priest, who could always take it back should they desire; be it because the priestess was too old, how charming, or just, well, because. Like a good submissive, Gardner seems to have viewed power as something to be played with only in a particular space, as something consciously given over for kicks, but with the understanding that you ultimately remain in control, especially once the session is over, the dom is paid and the scourge is put away. Decades later, Asphodel Long succinctly noted this half measure feminism when detailing her dissatisfaction with Wicca, describing how the British witchcraft of Crowley, Gardner and Sanders “… although deemed to be based on traditions apparently inherited through our grandmothers, in fact sets up a male oriented craft, worshiping a male god, … allowing to women a ‘priestess’ role and confirming heterosexual stereotyping on a patriarchal pattern.” Such heterosexual and patriarchal patterning would prove to be a stumbling block for many traditional crafters upon encountering the spectre of Dianic, feminist, and even, let’s use hushed and scandalised tones, lesbian covens, in which the idea of arbitrary, binary-gendered membership didn’t seem quite so important. Indeed, the obsession with an often essentialist gender balance in covens, seemingly argued for the strongest by sclerotic men worried that any shift beyond a 50/50 binary might be a step too far, is amusingly quaint, as is the attendant emphasis on witchcraft as strictly a fertility religion, now practiced by urbanites that had never put plough to furrow. One shouldn’t oversimplify this response and Feraro dutifully shows that opinions across the entire subculture were by no means monolithic, and for every amateur sociologist like John Score, telling women to respect and encourage male dominance and aggression, matching it with loving feminine submissiveness, there was a Michael Howard engaging with and promoting Monica Sjöö and validating her individual choice of acknowledging only the female aspect of the divine.

In chapter three, Feraro moves away from witchcraft specifically to look at the emergence of the usually unaffiliated Matriarchy Study Groups, and the wider Women’s Liberation Movement in Britain. This also provides an opportunity to consider how the writings of radical and cultural feminists such as Kate Millett, Mary Daly, Adrienne Rich, Susan Griffin, Robin Morgan, and Susan Brownmiller provided the grounding for the development of feminist spirituality across the Atlantic in the United States, in turn leading to the development during the 1970 and 80s of the Dianic witchcraft of Zsuzsanna Budapest and Starhawk’s Reclaiming tradition. Starkhawk is a constant presence not just in this chapter but throughout the book, with an influence that seems still greater than the generous 213 mentions she has; but which contrasts strongly with Gardner’s 160 and the 98 of both of the Sanders, Alex and Maxine. Even so, it is impossible to overstate Starhawk’s impact on the British witchcraft scene, with her Spiral Dance being almost universally well reviewed and received, and her occasional visits to Britain creating great interest. Even those witches with a direct line of descent back to Gardner appear to have thought highly of this newcomer, with none of the bitterness or suspicion that one might expect, with good reason, the occult subculture to be so capable of. Budapest and Starhawk’s influence on both British witchcraft and non-witchy goddess spirituality was often subtle and unrealised, with Feraro referring to Ronald Hutton’s observation that material produced by the two women, in particular chants, entered into the ‘oral tradition’ of witchcraft and were quickly assumed by some witches to be of ancient pedigree, rather than something imported relatively recently from the United States of all places.

In chapter four, Feraro turns to Britain’s literal green and pleasant land, with a consideration of three sites and events: the new age hub of Glastonbury, the anti-nuclear Greenham Common Women’s Peace Camp and the emergence of pagan festivals and conferences. In chapter five, he narrows his view to consider in greater detail a number of specific goddess women and Dianic witches, profiling Asphodel Long, Kathy Jones, Jean Freer, Janet McCrickard, Felicity Wombwell, Shan Jayran and Monica Sjöö. Of these women, Sjöö, as an active participant in British feminism and as part of goddess spirituality’s intersection with witchcraft, has an influence rivalling that of Starhawk within these pages, racking up 411 mentions. Her unapologetic and vociferously held views provided the perfect spectre for those in witchcraft that thought, horrors, this feminism and goddess worship might all be going too far. Chapter six follows a similar individual approach to its predecessor, but from a different perspective, this time seeing the response to feminist witchcraft and the women’s liberation movement from authors who represented effectively the Wiccan establishment: the Sanders, the Farrars, Patricia Crowther, Lois Bourne, Doreen Valiente, Vivianne Crowley, Marian Green and Rae Beth.

On the surface, Feraro’s seventh chapter promises to be the most interesting section of this book, discussing the variety of occult magazines, zines and newsletters from across the 1970s and 1980s. As he notes, magazines such as these gave voice to the grassroots opinions of everyday Wiccans and pagans, letting them sit alongside those of the subculture’s major figures who already had the option of having their voices heard in their own books. From a personal perspective, there is always a lure to zines and smaller journals, and an attendant nostalgia that recalls the promise of raw, experiential knowledge derived from the rock face of occult practice. As he does with the biographies in the previous chapters, Feraro introduces each magazine thoroughly discussing their approach and the history of the people behind them, before detailing their response, if any, to goddess spirituality and feminism. He covers familiar titles like Michael Howard’s The Cauldron, John Score’s The Wiccan, Hilary Llewellyn Williams and Tony Padfield’s Wood and Water, Phil Hine’s Pagan News, and the organ of Pagans Against Nukes, The Pipes of PAN; as well as lesser known publications like The Aquarian Arrow, Silver Wheel Coven’s house magazine, Dragon’s Brew, and others.

Women and Gender Issues in British Paganism has much to recommend about it and its true value is two-fold: first, with its focus on a subject little written about and second, in the thoroughness of these considerations. Exemplary of this are the profiles in chapters five and six, where a lesser title may have relegated biographies to one paragraph summaries, whereas Feraro honours everyone with a thorough background, allowing each person to appear as individuals, rather than briefly introduced faceless names.

Despite the frequent refrain of ‘thoroughness’, there is a degree of sloppiness in the proofing of Women and Gender Issues in British Paganism, with the occasional appearance of vagrant words that remain after sentences have been reworded, incorrect verb forms and the odd but amusing wrong-word error. See, for example, a single paragraph on page 92, in which Museum Street’s famed Atlantis Bookshop miraculously transforms in a mere five lines into the slightly less mystical Atlantic Bookshop. While these errors are not necessarily common, their appearance can be jarring in a title such as this that otherwise feels meticulously constructed; especially in those cases where several errors do appear in relative close proximity, only a few pages apart.