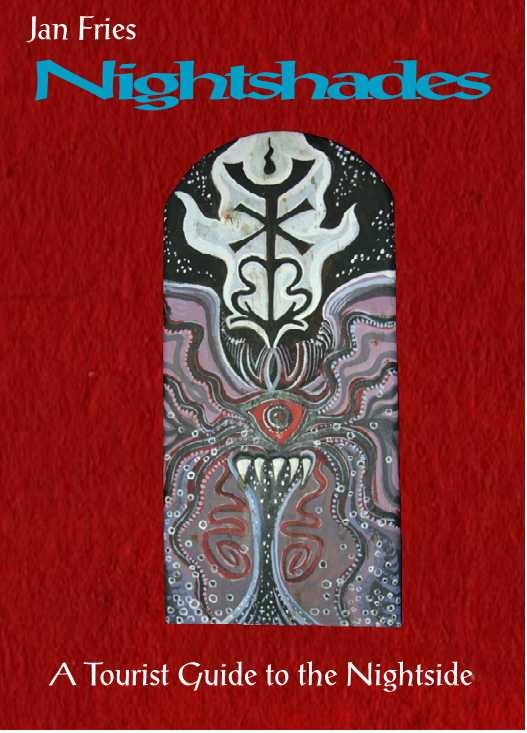 My first encounter with Jan Fries was his Helrunar, which I first saw sitting tantalisingly in Wellington’s Pathfinder bookshop (now long departed home of all matters occult, but mainly self-help books and cassettes of whale song). The text in Helrunar was accompanied by black and white illustrations (including a lovely one of a piebald Hela and Níðhöggr) and it is similarly styled images that are the focus of this book.

Before getting to his pictorial guide to the Nightside, Fries gives a fifty or so page introduction to the themes therein. As ever, Fries takes a conversational style in his writing, not being one for occult obfuscation, and he positively bubbles with enthusiasm for his subject. Covering everything from the neurochemical components of love to the use of the Sephirothic tree and the nature of the Nightside in general, Fries comes across as a polymathical guru (or Joseph Campbell), sparking little realisations of truth as he leaps from one subject to the other. There is something a little mid-90s chaos magick in his approach, where magick is seen as being grounded in psychological and physiological experiences and frameworks, and your mileage may vary when it comes to your enjoyment of that method.

Wrapping up his introductory essay, Fries gives a biographical note explaining the origin of the images that follow, revolving around an intense series of encounters with his Holy Guardian Angel and journeys into the Nightside that began in 1982. Created between 1981 and 1983, the images were usually sketched directly upon exiting trance and then inked later, and Fries describes them as expression of “an experience and a state of intense emotionality.” Some of these images have been published before as a picture book, Visions of Medusa, others are part of an unnamed book of journeys to the Ancient Ones, while the third section, Nightshades proper, concludes the book with images of the 22 Qliphothic entities.

The images that Fries presents here are indicative of his style which is unique amongst occult art. While his closest comparison would be Austin Spare, it is only due to both artists having the same atavistic quality in their work, and Fries mines a more cosmic, ever so slightly science fiction oeuvre that feels indebted to the wide and vaguely organic vistas of Moebius. Never one for shading or thick lines, Fries renders the tone and mass of his figures as unfilled spaces, giving them an otherworldly quality of translucent bubbles. With 71 pictures in total, not all of them can be stunning, but those that are, truly are. In some ways, the most successful images are the Qliphothic Nightshades, which for the most part, have a consistent look and feel. For anyone familiar with these entities from direct experience or from the works of Kenneth Grant and others, there’s a definite moment of recognition that occurs when turning these pages.

In the introduction to this book, Mogg Morgan describes how, in 2008, he and other Oxford occultists worked with some of these images, making copies that they then coloured as an act of focus. Unfortunately, that feeling of photocopied transmission pervades the book, with some images looking a little worse for wear: greys, on those rare occasions they occur, losing any subtlety and becoming splotchy; and blacks that can be speckled and inconsistent. This is compounded by the choice of paper. Given Fries’ use of fine line, his art requires a weighty paper that can sympathetically ground his ethereal images, however, Mandrake have gone with a cheap, thin, and clinically white stock that has all the personality (and quality) of a ream of photocopy paper. It is actually physically unpleasant to touch (possibly from all the bleach used to whiten the paper) and leaves the images often looking scratchy and poorly reproduced. To its credit, the book is large format and hard bound, but even here, the cover image is blurry and pixelated in places, suggesting that it is a low resolution picture that has been recklessly enlarged for print. While it may not have been necessary to go to the extent of the straight-to-eBay section of occult publishing, a little more quality control and attention to materials would have made this an essential volume.