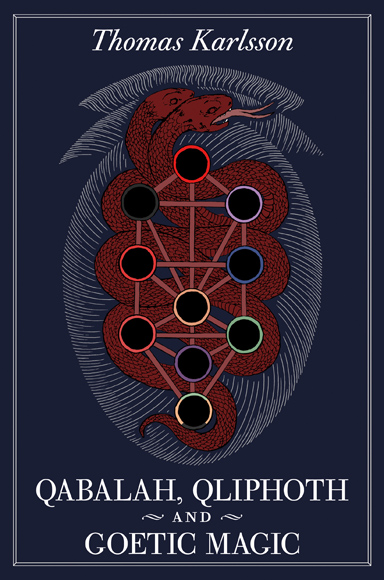 Originally released in Swedish and then in English as a hardback edition, Qabalah, Qliphoth and Goetic Magic has now been reissued as a rather sumptuous paperback with French flaps, featuring new colour art plates and extra material. As the title suggests, Thomas Karlsson’s book is divided into three sections, beginning by considering both the day and night sides of the tree of life, before addressing the slightly tangential subject of Goetic demons.

In his initial consideration of Qabalah, Karlsson plays it pretty straight, especially considering the left turn that the rest of the book takes. He writes clearly and with some authority, giving an outline of Qabalah that references primary texts as well as considering its role in considerably more recent Western Occultism. One of the problems with this section, and it is common to a lot of qabalistic literature, is that the whole point, purpose or practical application of the system is never addressed. Yes, Binah may mean this, and Geburah may mean that, and we could spend pages looking at the complex gematrical meanings behind this and that, but what do you do with it? Is it all a metaphor, or are there really giant balls of mercy and severity floating somewhere out there in space? Are we meant to think of the sephira as planes that the adept can travel too with their active imagination, and if that’s the case, then why does no one say this? It’s almost as if so much has been written about qabalah over the years that no one dares address the elephant in the room that is trumpeting “but what do you actually do with it?”

Karlsson then turns to the nightside of the tree and his discussion of the Qliphoth is probably the most definitive and cogent consideration in print. There’s little of Kenneth Grant-styled purple prose here with all of its wallowing in the grotesque, despite the dark subject matter. Although, in saying that, that word dark does seem to spring up a lot. Adepts aren’t just adepts, they’re dark adepts, shadows are dark shadows (the best kind of shadows, right kids?), both illumination and alchemical processes are dark, and quite quite quite surprisingly, the Abyss is dark; all this on one page… whoops, I mean, all this on one dark page.

The ten qliphoth are each presented with in-depth descriptions, running from Lilith (instead of Nehemoth) to Thaumiel. Karlsson follows this with the book’s practical content in the form of some qliphothic invocations, a consideration of magic squares and a visualisation of a journey through one of the tunnels of Set that join the qliphoth together. The four qliphothic invocations are directed towards the first four qliphoth (Lilith, Gamliel, Samael and A’arb Zaraq) and are prefaced by a fairly standard ceremonial ritual with cast circles, knives, wands and incense. The invocations address the spirits of each of these qliphoth: Naamah for the qliphoth of Lilith, and confusingly, Lilith (the entity) for the qliphoth of Gamaliel, with Andramelech kicking it old school style for Samael and Baal for A’arb Zaraq. The one tunnel visualisation presented here is for Thantifaxath (with a promise that visualisations for the other twenty-one tunnels are available to Dragon Rouge initiates), in which the participants is led into a mountain within which they encounter a naked female figure carrying two bloody crescents.

Karlsson gives sigils for the 22 spirits of the qliphothic tunnels of Set that are different from those originally printed by Crowley in Liber CCXXXI. And it’s probably a good thing too, given how dorky some of them were. Yes, I’m talking about you, Tzuflifu. Don’t look so surprised, Hemethterith! And is it just me, Thantifaxath, or do you look like a tortoise wired up to a couple of batteries? In contrast to Crowley’s idiosyncratic originals, Karlsson’s updated sigils have a pleasing and consistent aesthetic that is very much indicative of image-conscious modern magick, all lovely rings, crescents and tapered swirlies. The sigils for the qliphoth themselves are also rather nice and follow a similar style.

In his final section, Karlsson turns to goetic magic with an overview of ritual procedure for invocation before listing the sigils and characteristics of the 72 demons of the Goetia. There’s nothing particularly new here and by the time you get to Andromalus and his ability to return stolen property, the only thing you might want returned is all your time spent reading about his 71 predecessors.

All in all, this is a valuable addition to nightside literature, if only because of its thoroughness and its coherence that contrasts sharply with Kenneth Grant’s wonderful, but ultimately infuriating, incoherence. It is clearly written from the perspective of Karlsson’s Dragon Rouge order and as such gives an interesting insight into their system; and for that matter, into the themes of the metal band Therion, for whom Karlsson is lyricist. The book’s goetic section feels unnecessary, and the time and space spent on the 72 familiar faces of demonology could perhaps have gone into a similar but inherently more interesting summary of the tunnels of Set and their denizens.