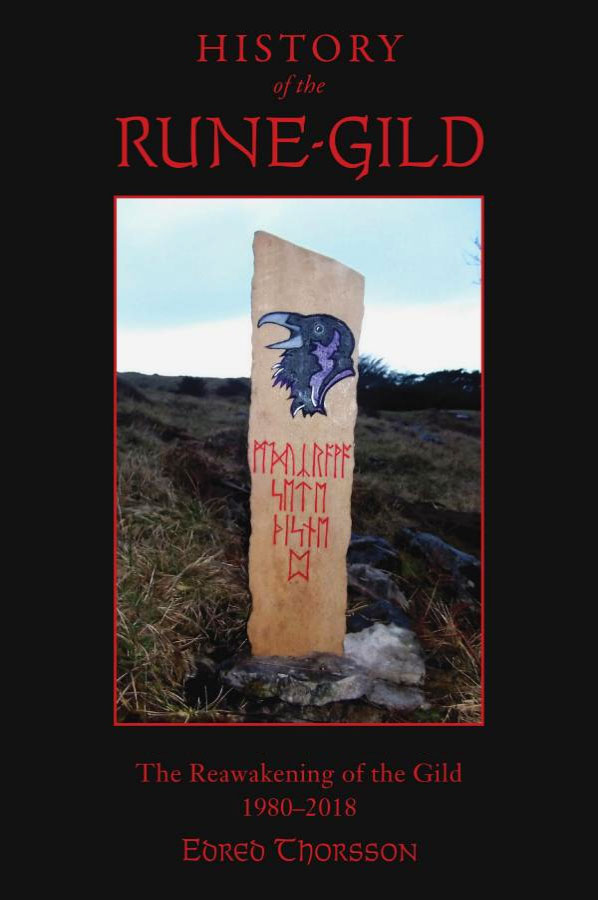 This title from Stephen Flowers, aka Edred Thorsson, has the peculiar status of being the third, and yet first, volume in an as yet to be completed trilogy that will discuss the history of the Rune Gild. While this entry documents the most immediate and therefore accessible incarnation of the gild, the others will consider its historical antecedents. Thorsson is of the belief that the Rune-Gild, an initiatory organisation with a scholarly focus formed in 1979, is the continuation of a group that existed in ancient times, a unified, coherent and organised Gild of Runemasters, as he describes them. This incarnation will be the subject of the eventual first volume, while attempts to revive runic lore from medieval times to the modern era will be the focus of the trilogy’s intermediate entry. This third volume represents an expanded edition of a work originally released in 2007, and includes previously unpublished photographs and an exhaustive bibliography of Thorsson’s published works.

The modern history of the Rune-Gild is intimately connected with Thorsson’s own, and so this volume inevitably tends towards the autobiographical, with the gild as an adjunct to his personal journey. This is clear from the start, where the first chapter is a biography of Thorsson from a precocious youngster, to his joining of the Ásatrú Free Assembly in 1978.

Thorsson writes with a gruff, pugnacious manner that perfectly fits his appearance and prominent moustache, making him come across like a Runic Ron Swanson, whether he’s railing against political correctness gone mad™ in academia, or WWE’s ‘sports entertainment’ brand of wrestling. Indeed, to use the parlance of the latter, Thorsson often seems to be cutting a promo on his foes and bugbears, channelling Classy Freddie Blassie or Bobby Heenan when he somewhat cringingly refers to lesser participants in this here magical milieu as “occultizoid nincompoops.” To continue this use of wrestling’s nomenclature, History of the Rune-Gild sees Thorsson constantly turning heel on former colleagues and associates (though perhaps he views himself as the babyface betrayed by cowardly foes), and this allows the book to be the definitive airing of grievances as no one is spared his indelicate wrath. The result is something of a scurrilous read, which may or may not work for some readers, depending on the degree of glee they take in snark, scuttlebutt and out-right invective. 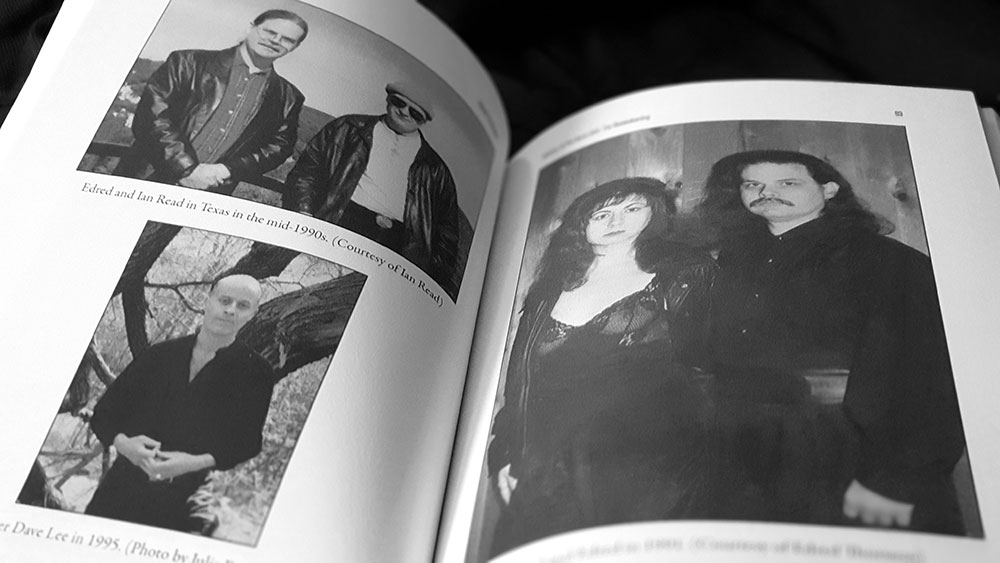 This is particularly evident in a section devoted to publishing, where Thorsson eviscerates (there really is no other word for it) his past fellow writers at Llewellyn. Almost everyone gets a chairshot or is thrown onto a bed of thumbtacks strewn across the mat, including DJ Conway (her Thorsson-edited Norse Magic was “another Llewellyn travesty”), Donald Tyson (a Germanic bandwagon-jumper possessed of a “dull wit” with a “wilful misunderstanding” of the gods), and of course, the unfortunate Ed Fitch (who foolishly admitted that he had actually tried a few of the rituals in his laughable Rites of Odin and they seemed to “work pretty well”). Then there is David Godwin who is mocked for apparently not knowing about the Greek Magical Papyri despite having written a book, Light in Extension, about Greek magic ancient and modern, while Donald Michael Kraig’s assessment of Thorsson’s Hermetic Magic manuscript is extensively relitigated in return here. Even Freya Aswynn and Kveldulf Gundarsson, two authors who largely survive unscathed in this section, still receive a bit of a jab when Thorsson laments, with a touch of endearing ennui, that we can expect no gratitude in the world, as even those two individuals eventually formed an alliance and worked against him and his interests.

While the book does largely follow a chronological narrative, Thorsson sometimes takes a breaks of an entire chapter to focus on a particular subject area, be it the discussion of his involvement with publishing (beginning with Llewellyn and Weiser and culminating in the founding of his own Rûna Raven Press), his experiences in the Temple of Set, or musing on his time spent in academia. While they broadly fit within the surrounding narrative, some of these feel almost disconnected, repeating details as if they haven’t been mentioned before, and giving the sense that maybe, though there is no other evidence of this, they were based on standalone essays. Thorsson seems, for example, to be repeatedly heading off to Europe for a year of study and leaving the Rune-Gild in the capable hands of Edwin Wade, when it’s actually the same moment retold anew in different contexts. 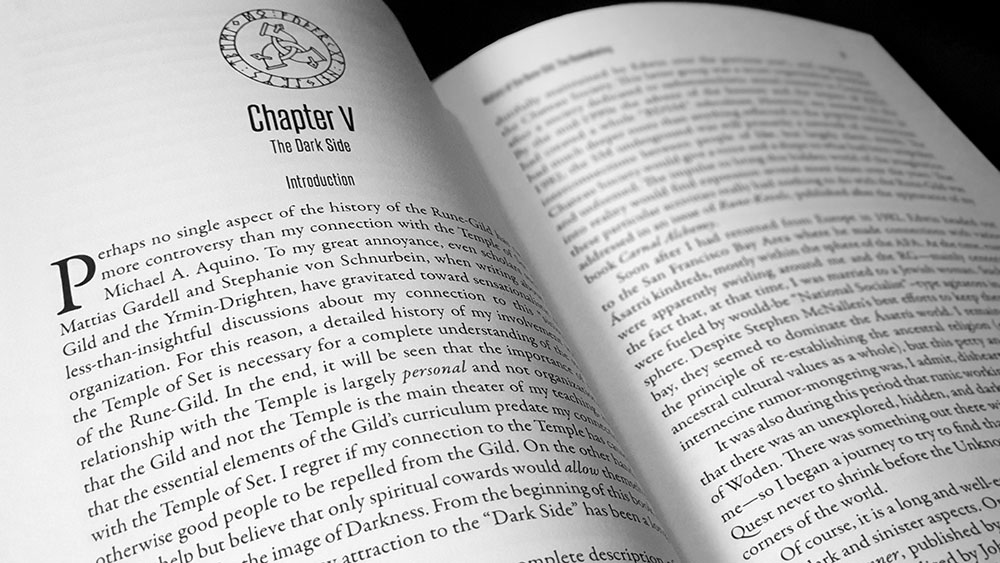 Perhaps the most interesting of these focused chapters is a detailed discussion of Thorsson’s relationship with the Temple of Set, something that over the years has proved variously intriguing, problematic, disconcerting or simply incongruous, depending on one’s perspective. Thorsson’s role with the Temple has been a long one, rising through the ranks to gain the grade of V° Magus, and becoming grand master of its Order of the Trapezoid. He makes a strong case when explaining his reasons for such intense involvement, clearly aware of the eyebrows it has raised over the years. One of the key points here is the value of engaging fully with a system and its structure as a learner, of submitting to the process, and of the lessons that can always be learnt from a mentor. For Thorsson, that mentor was the temple’s founder, Dr Michael Aquino, who he lauds for performing the same role in matters magickal that Dr Edgar Polomé, his lecturer and mentor at the University of Texas, did in matters academic.

Other than the Temple of Set and the Rune Gild itself, the organisation that receives the most attention here is The Troth/Ring of Troth, formed in 1987 by Thorsson and James Chisholm after the disestablishment of the Ásatrú Free Assembly. Thorsson’s relationship with the Troth is portrayed as one of some distance, like a disappointed father, and the account here is more often than not a resigned, melancholy testament to the perils of being involved with an occult organisation, all internal struggles, power plays, gossip and more time practicing malice than magic. 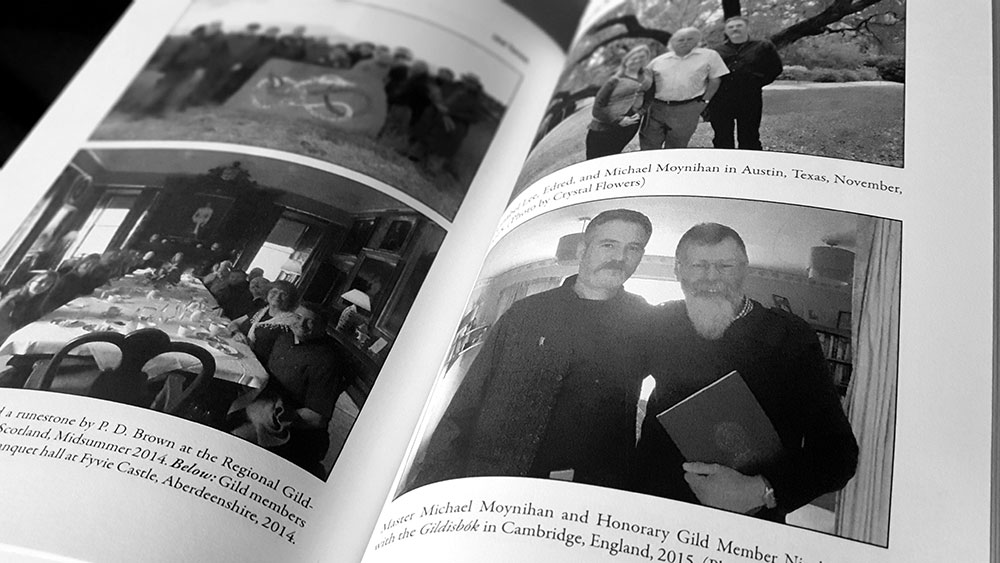 In contrast, the penultimate and final chapters document the growth of the Rune Gild and the light cast here is considerably more favourable. As the 1990s headed towards the 2000s a physical space called Woodharrow was developed on 30 acres of land in Lost Pines, east of Austin, with the Yrmin-Hall raised in 1994. New cast members are added to the history, with Ian Read of Fire + Ice being increasingly involved and acquiring the rank of Rune-Master (the album Rûna being his qualifying masterwork), while long-time associate Alice Karlsdóttir ascended to Gild-Master (her book Magic of the Northern Goddesses being her masterwork). Compared to the earlier chapters, this period is treated positively and less curmudgeonly, though Thorsson still inevitably laments the failings of the occasional member. In a slightly more compact view of the Rune-Gild’s more recent history, Thorsson then summarises various moots held through the year before the gild was destroyed and re-constituted on 11/11/11 (apparently necessitated by the forces of Níðhöggr) with Thorsson stepping aside as leader.

History of the Rune-Gild is well illustrated with two sections of photographs of Thorsson, his influences and contemporaries. The first documents Thorsson’s early life and that of the nascent gild, whereas the latter shows various gild associates (masters, fellows and drightens), including famous faces like Michael Moynihan, Ian Read, and honorary member Nigel Pennick. In addition to these supplementary images, the book concludes with an extensive appendix, 26 entries in all, providing a wealth of original documents. These range from a 1959 news clipping documenting a conjunction of the Moon and Venus observed by a young Stevie Flowers, to various Rune-Gild and Troth documents, excerpts from Temple of Set newsletters, and a range of Thorsson’s pugilistic missives on gild letterhead from over the years. The most interesting of these appendices is a facsimile of the Odinic Rite’s breathless expose and condemnation of Thorsson’s association with the Temple of Set, full of righteous indignation and paranoia, as they try to get their heads around the apparent incompatibility of the two organisations, and attributing Thorsson with all manner of nefarious intent. 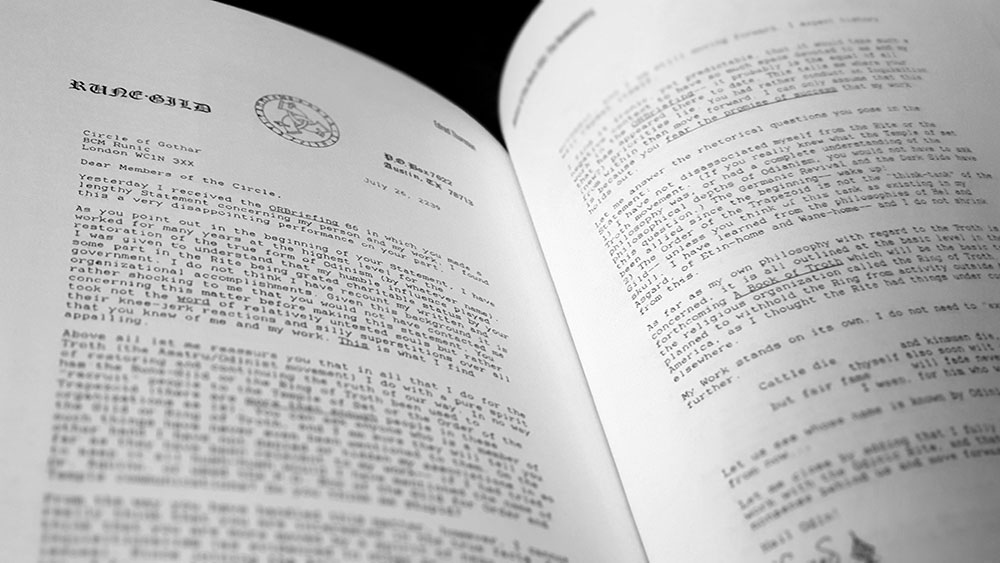 History of the Rune-Gild was edited by Joshua Buckley and Michael Moynihan, with cover design by both (using a photograph by P.D. Brown), and typesetting confidently executed by Buckley. It is available as a trade paperback.

Published by Gilded Books, an imprint of Arcana Europa Media