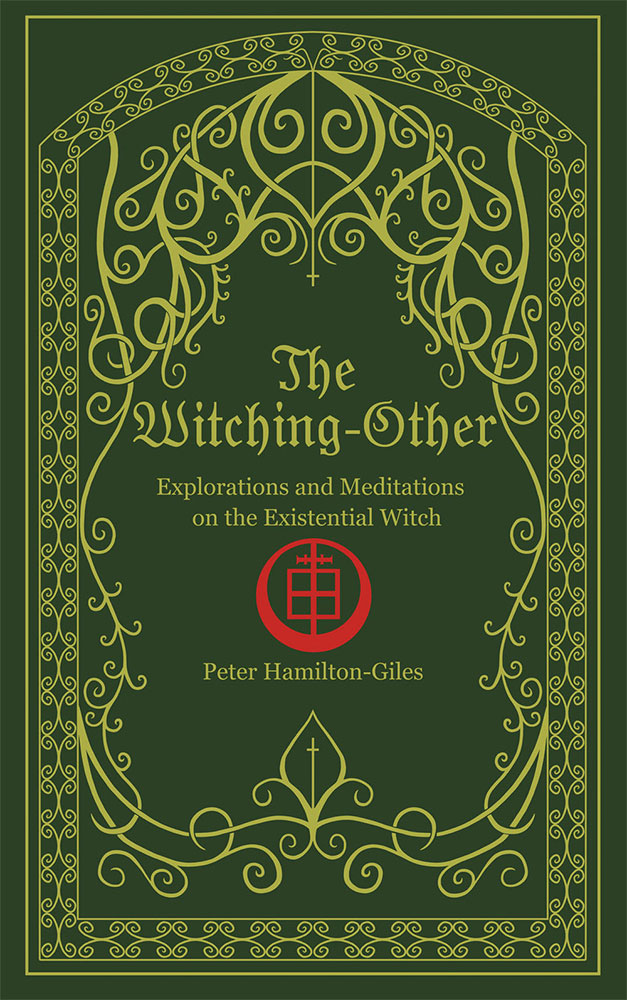 Peter Hamilton-Giles may be best known for his previous books published by Three Hands Press, The Afflicted Mirror and The Baron Citadel. He is also the instigator and co-founder, so the bio goes, of the Dragon’s Column, the body of initiates whose material is featured, albeit in edited form, in Andrew Chumbleys’ Dragon Book of Essex. With The Witching-Other: Explorations & Meditations on the Existential Witch, Hamilton-Giles and his wife Carolyn, who, fun fact, also comprise the doom metal duo Pombagira, have inaugurated their own imprint, Atramentous Press, marking this birth with a statement of intent in both writing style and aesthetics. In matters aesthetical, Atramentous come out of the gates with a very clear look, presenting this book, its sequel, and another title about Welsh witches, in a distinct, ornamented style, all filigree and not so much shadow.

Meanwhile, in matters of writing, as the title suggests, The Witching-Other: Explorations & Meditations on the Existential Witch has lofty ambitions and attempts to address the figure of the witch from a theory-heavy, methodology-driven academic perspective. What that means is that various aspects of the witch, and as an embodiment of alterity in particular, are considered in dense, somewhat tortuous language that is as vermicular as the book’s ornamented cover design.

Hamilton-Giles appears to write with a thesaurus in hand, never using a simple word or phrasing when a more cumbersome one can be found. One almost begins to think it’s intended as a parody of academic writing, a social experiment to see if anyone is willing to risk looking stupid by saying they can’t follow the incomprehensible; a wager worth making in the image-conscious world of occultism where no one wants to look either uninitiated or unintelligent. It’s not just that there is an abundance of words from the academic lexicon, it’s that their meaning is sometimes lost through their very concatenation, where the in-between-words stringing them together can be overwhelmed by their grandiloquent companions. Structure can be awkward as words large and small jostle to get meaning across, while sentences can be so elongated and circumlocutory that the initial tense is changed or the preposition altered by the time you get to the end of it. Then there are words that don’t seem to mean what they’re thought to mean. Can anything (although in this case we’re talking about “the meeting of the physical and the metaphysical”) imbibe “the perceptual horizon with the continuity concept.”? How does one imbibe a perceptual horizon, let alone with the continuity concept? 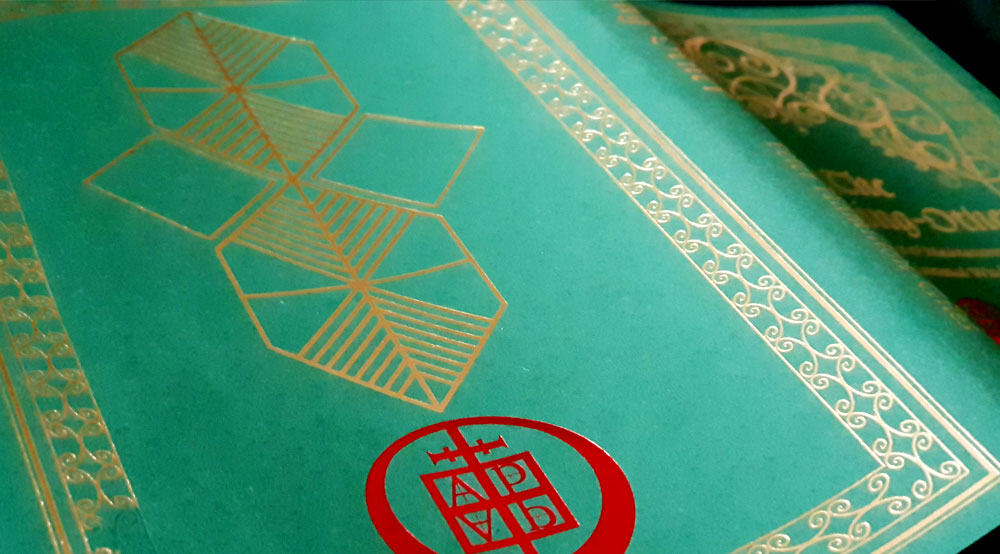 Interestingly enough, given Hamilton-Giles’ background in grindcore (he was a member of early Earache Records band Unseen Terror), if the phrasing reminds of anything it’s the medical textbook song titles and lyrics of the band Carcass, in which obscure and technical words were admirably combined, but not always in the most natural way: descanting the insalubrious, or lavaging expectorate of lysergide composition, for example.

The Witching-Other is not perpetually impenetrable, and one finds oneself stumbling into areas where lucidity momentarily reigns, in which the words are still big, but the narrative is clearer and more consistent. This is particularly noticeable where the dizzying first chapter, which shares its title with the book as a whole, gives way to the second, the relatively more digestible Esoteric Hermeneutics and the Witching-Other. The difference between the two chapters is marked, with the periphrastic quality dropping right away, and yet, perversely, the previously applied rules of thumb for punctuation changing to a less rigorous application. Similarly, the tone palpably shifts from the disquisitional voice of the first chapter to a more conversational one in which Hamilton-Giles suddenly starts engaging the reader with hypophoras, asking them theoretical questions.

The Witching-Other is a book you want to like. Who, to use my very own hypophora, doesn’t like a bit of heavy theory with their witchcraft? Not me, that’s who. At the same time, though, who has time for wilfully obtuse writing if there is a point to be made? Especially if that obtuseness runs the risk of descending into incomprehensibility if the unwieldy words get crazy and go into people’s houses at night and wreck up the place. Perhaps, the intent was to follow Gilles Deleuze’s advice in A Thousand Plateaus: Capitalism and Schizophrenia and “Bring something incomprehensible into the world!” It’s an interesting indication of what reading The Witching-Other is like that the thought of then turning to some Deleuze, Judith Butler or Jacques Derrida promises to be a soothing, effortlessly light read. 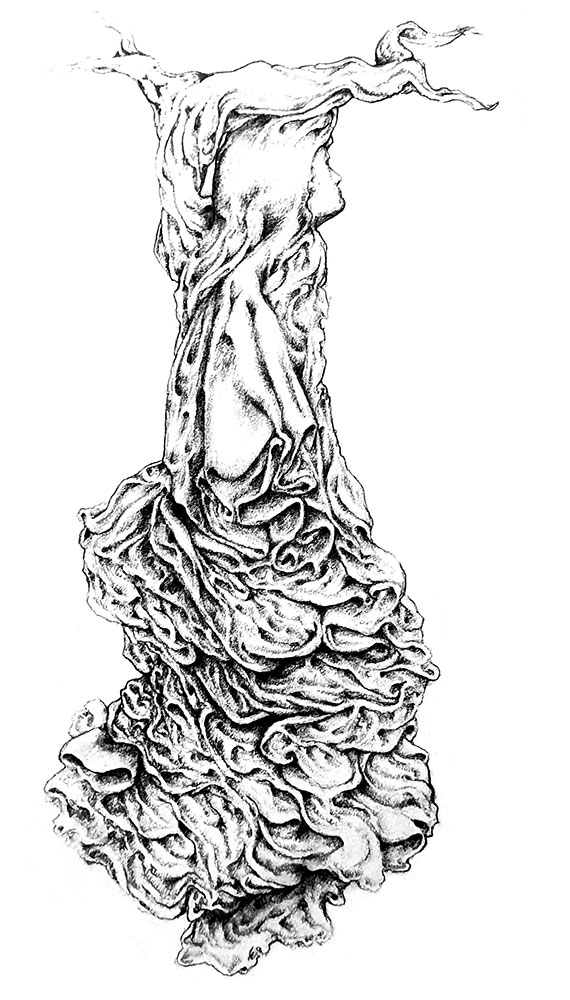 As the first book published by Atramentous Press there are a few layout wrinkles that seem to have been ironed out in a subsequent book, but not in the sequel to this volume where the styling has been reprised. The most obvious and jarring is the, how you say, reverse indents, where whole paragraphs are indented, except for the first line. This creates a disconcerting sensation and does negatively affect readability, with one’s eyes wandering across the page devoid of the anchors provided by the conventions of layout. On top of that, paragraphs are fully justified and so hyphenation is naturally turned on to avoid text rivers. But the settings applied here are rather conservative and words are hyphenated at as little as two letters, resulting in ladders of hyphens throughout paragraphs, engendering a stuttering, segmented experience for the reader. Both choices are particularly problematic given the sesquipedalian nature of Hamilton-Giles’ writing, where formatting should be assisting comprehension, not compounding any amphibolousness. All of these design choices are strange as there is otherwise a nice, sophisticated feel to the rest of the typography from Joseph Uccello. If the goal was, though, to disorientate through typography as much as through language, then mission accomplished, consider me discombobulated. 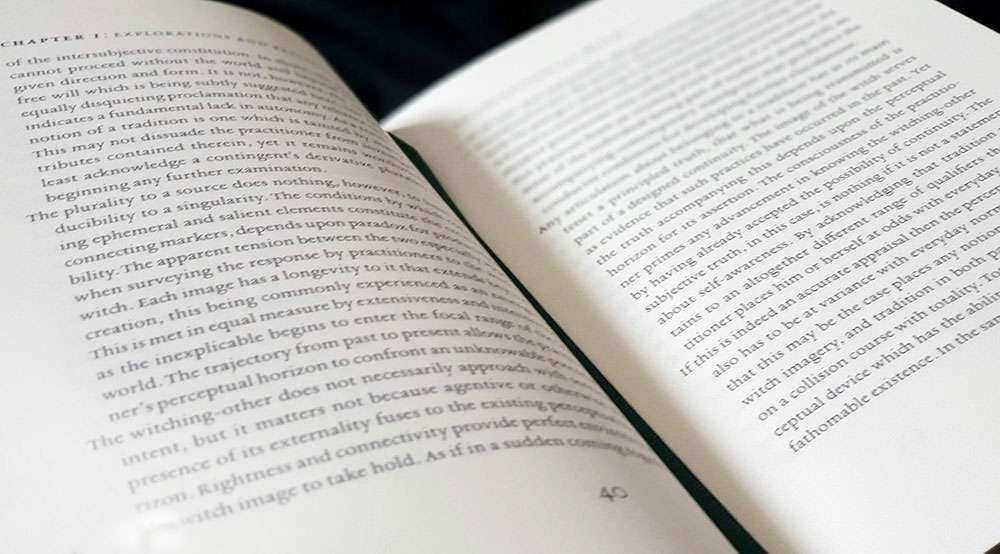 The Witching-Other was released in a standard edition of 891 copies and a deluxe limited edition of 15. The standard edition features 160 100 gram Munken Print Cream pages with Napura endpapers, a ribbon, and is bound in a dark green cloth with the Atramentous logo debossed on the cover. It is wrapped in an evergreen colourset dust jacket, with designs in red and gold foil, though some of the gold is already flaking or was never completely applied on the rear of this copy. The sold out deluxe edition was hand bound with burgundy calf, with the designs from the standard edition’s dust jacket blocked in gold on the front, back and spine. With marble edging on the pagers and marbled endpapers, it is contained within a solander box with the Atramentous logo blocked in gold foil on the front. In addition, the deluxe edition came with a limited print of Carolyn Hamilton-Giles’ illustration, signed by the artist and printed on good quality card.

3 Responses to The Witching-Other: Explorations & Meditations on the Existential Witch – Peter Hamilton-Giles