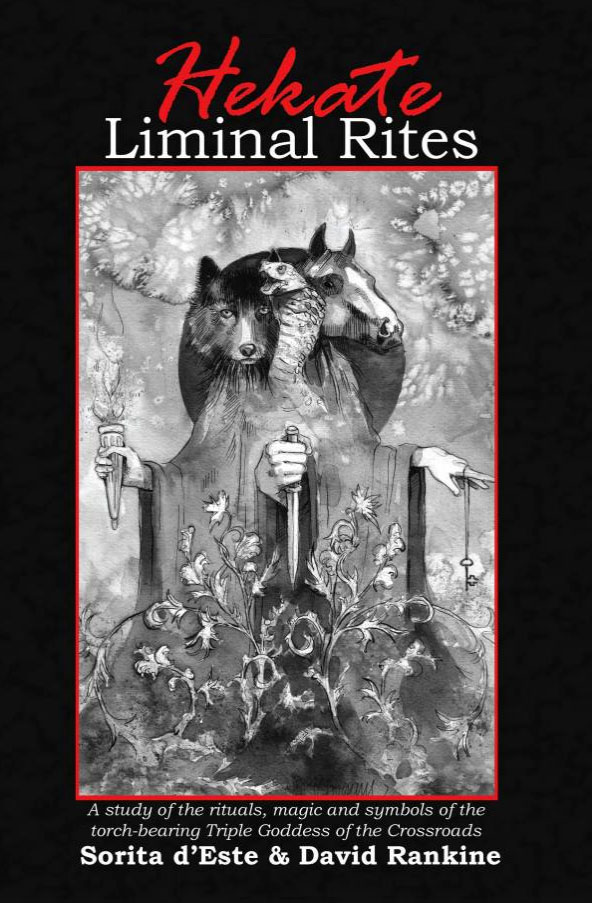 The goddess Hekate looms large over at Avalonia, and in addition to this colon-deficient title, the Glastonbury-based publishers have released The Temple of Hekate by Tara Sanchez, two anthologies both edited by Avalonia owner Sorita d’Este (the equally colon-wanting Hekate Her Sacred Fires and Hekate Key to the Crossroads), as well as d’Este’s own more recent work Circle for Hekate – Volume I: History & Mythology, yay, colons. If that wasn’t enough, d’Este also founded the Covenant of Hekate and runs the semi-regular Hekate Symposium. Suffice to say, if indeed faith without works is dead, d’Este should be pretty assured of some eschatological rewards from her matron when the time comes.

d’Este and collaborator David Rankine give a hint of their intent with the book’s verbose subtitle: A study of the rituals, magic and symbols of the torch-bearing Triple Goddess of the Crossroads. This is expanded upon in the introduction where they talk of coming across various items relating to Hekate whilst researching other projects, describing this book as part of a long term project that brings together such nuggets as they relate to ritual practices. As such, the book details information on historic charms, blessings, herb and root magic, dreams and divination, effectively providing a toolkit of authentic, referenced magickal items and procedures that can be incorporated into one’s own Hekate-themed modalities; and not just some handheld modern rituals to slavishly follow, as some disappointed reviewers on Amazon were obviously looking for.

Because of this, Hekate Liminal Rites can be a little dry. In places it sometimes feels like an info dump, where research notes have been entered into chapters, without much from d’Este and Rankine to glue them together. That contextual glue can also be absent between chapters, simply because a chapter’s focus on a particular area in which Hekate is documented can be brief and standalone, sharing little with the chapters that precede or proceed it. This is, obviously, inevitable given the style of the book, and as a criticism has little solution, but is mentioned to provide a sense of the content’s style and its resulting reading experience.

One of the most interesting things that d’Este and Rankine draw attention to is the syncretic nature of Hekate, where her associations in the ancient world weren’t monolithically Greek, but instead often placed her in concert with deities from Egypt, Mesopotamia and later even Christianity. In spells for love and protection from the Greek Magical Papyri, Hekate appears alongside Ereshkigal, the Sumerian goddess of the underworld and an obvious cross-cultural equivalent. The same association is found in defixiones, simple binding spells made on lead tablets, with Hekate being joined by Ereshkigal and other names in a string of voces magicae. In other instances, Hekate appears in the company of angels, with a spell from the Greek Magical Papyri addressing her alongside the archangel Michael (as well as Hermes, Mene, Osiris and Persephone), while in others, angels are identified as the minions of Hekate, who is entreated to send them forth to aid the supplicant.

Given their theurgic emphasis, the Greek Magical Papyri plays a large role within Hekate Liminal Rites as a source, as do the Chaldean Oracles. But d’Este and Rankine also draw from the entire classical canon, beginning with Homer, the Greek dramatists, and up to Roman historians and the Early Church Fathers, as well as extending well beyond this to a smattering of occult sources like Heinrich Cornelius Agrippa. As such, there’s a wealth of material to draw from and Hekate’s ritual correspondences, types of ceremonies and procedures, are all covered off magnificently. This ritual framework also allows other areas of Hekate to be touched on, with spells from various sources providing opportunities to consider her animal forms, herbs and potions, associations with the underworld, and even her relevance to Solomonic magic. These are all presented in a brief, utilitarian manner, making for a brisk but pleasant read; with extensive and blessed citing of sources throughout.

Hekate Liminal Rites is available as a 193 page paperback, printed like most, if not all, Avalonia titles by print-on-demand company Lightning Source. There’s not much of the way of internal illustration, with only a handful of statue photographs and reproduced prints. With that said, the cover image of a triform Hekate from Joanna Barnum is pretty great and more of that on the inside would have been neat.