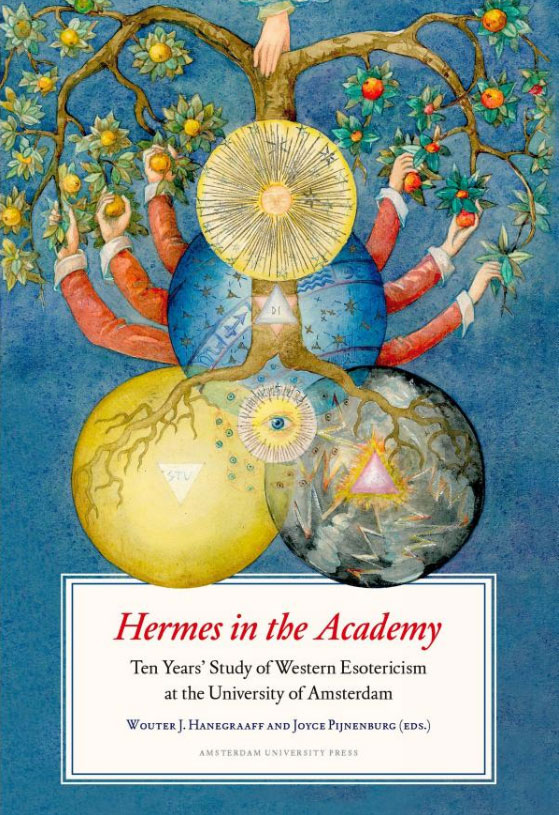 Published in 2009, this volume commemorates the establishment ten years prior of a chair and centre of expertise for the study of Western esotericism at the Faculty of Humanities of the University of Amsterdam. While the writing in this anthology touches upon the wide gamut of Western esotericism including alchemy, hermeticism, and kabbalah, the first section is more pragmatic and concerns itself with the creation of the chair for History of Hermetic Philosophy and Related Currents, as documented by Roelof van den Broek, while Wouter J. Hanegraaff considers the state of esoteric studies in the academia of the late 1990s. The same is also true of some of the book’s other sections, in which the writings about writings have been categorised into sections of Studying Western Esotericism in Amsterdam and Western Esotericism in International Perspective.

The second section, Glimpses of Research, provides just that, with a selection of representative research pieces spanning the neoplatonism of the Italian Renaissance to twentieth century Danish esotericism and a few bits in between. It begins with a pure glimpse of research with an essay on the Byzantine philosopher George Gemistos, AKA Plethon (1355/1360-1452), but then, almost inextricably, things drift back to writing about writing about magic. The two following pieces Kocku von Stuckrad’s Astrologia Hermetica: Astrology, Western Culture, and the Academy, and Marco Pasi’s The Modernity of Occultism: Reflections on Some Crucial Aspects, both effectively concern themselves with how their fields have been, perhaps unfairly, perceived in academia. Stuckrad’s Astrologia Hermetica briefly surveys how astrology has in the past been treated with almost embarrassment, where studying its historical uses always had to be qualified with a disavowal in any literal belief in the ‘wretched subject.’ Pasi’s The Modernity of Occultism, on the other hand, addresses the perception of occultism as fundamentally reactionary and authoritarian, an image made glibly real by the stereotype of the elitist magician seeking unlimited power.™ Pasi turns this assumption, made principally by academics in the first half of the last century, on its head, highlighting how the growth in esotericism in the twentieth century undid many of these claims. Focussing in particular on the Theosophical Society and the Golden Dawn, Pasi shows that in regard to matters relating to gender, body and sexuality, the self, colonialism and religion, those strands of Anglo-American occultism, at least, were progressive and, he argues, anticipating rather than just being representative of broader societal change.

Things turn more personal and reflective in the third section of Hermes in the Academy with Studying Western Esotericism in Amsterdam, in which five writers each briefly reflect on their time in Amsterdam academia. There’s not much to these, each being over in a flash, but they’re charming little pieces, showing how the university attracted would-be hermetic academics from around the world.

And then everything wraps up with part the fourth, Western Esotericism in International Perspective, in which discussion turns once more explicitly to the chair at the University of Amsterdam with paeans from further afield, contextualising it within the greater milieu of occult academia Thus, Antoine Faivre, holder of the chair of History of Estoteric and Mystical Currents in Modern and Contemporary Europe at the École pratique des hautes études in Paris, speaks of the history of that particular chair dating back to 1964, and of its subsequent collaborations with its Amsterdam equivalent. Meanwhile, Nicholas Goodrick-Clarke, holder of the chair of Western Esotericism at the University of Exeter, focuses less on the Amsterdam chair with a lens turned instead to the study of Western esotericism in the United Kingdom, framed first within his own journey of study, before expanding on the achievements of the Exeter programme. Dame Frances Yates naturally looms large in this section and elsewhere in the book, with Allison P. Coudert, who studied under her, noting her important role as a legitimising force in the academic place of Hermeticism.

In all, Hermes in the Academy doesn’t entirely feel like it knows what it wants to be. The representative research often feels incongruous, lacking context alongside the reflections on the history of the chair and studying at the University of Amsterdam, and not feeling all that representative. Indeed, the brief little pieces from students in the third section are some of the most engaging contributions, and their mention of their specialist subjects areas are more intriguing than what is included here. As such it is the ‘writing about writing’ that becomes the most enjoyable part of this volume, with the various discussions about esoteric academia being more satisfying than the esotericism itself.

One Response to Hermes in the Academy: Ten Years’ Study of Western Esotericism at the University of Amsterdam – Edited by Wouter J. Hanegraaf and Joyce Pijnenburg