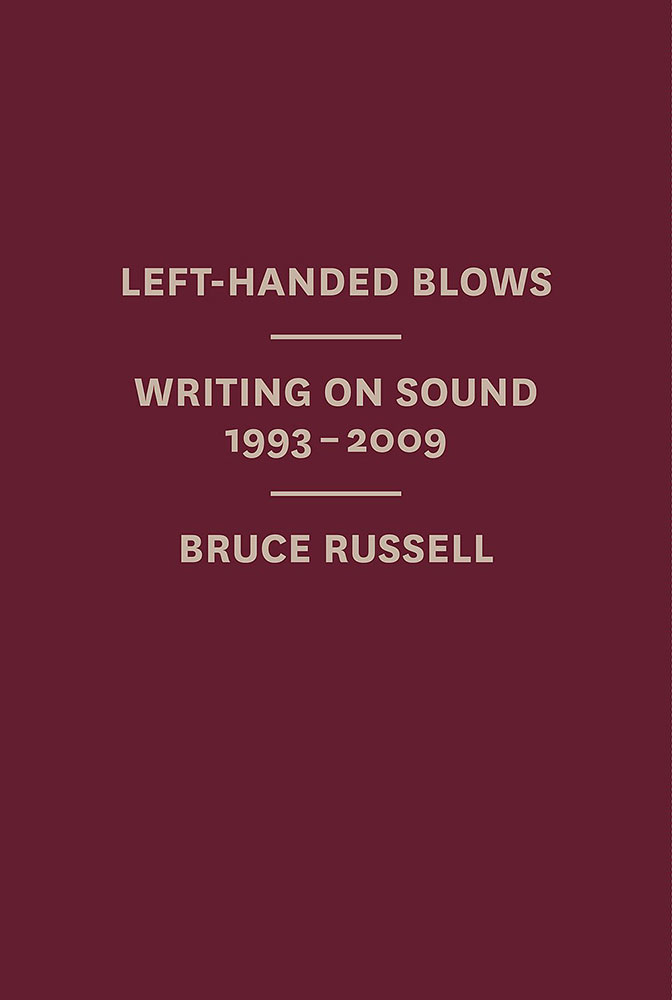 The copy of Left-Handed Blows that sits before this reviewer has an interesting provenance, having been withdrawn from the library of a tertiary institution I used to work at. Quite who there would have ordered a book by the Dead C.’s Bruce Russell is hard to fathom, as the music department at this institution, both teaching staff and students, could hardly be said to have adventurous tastes. And the pristine, un-issued state of this book suggests that any optimism of usage by whoever ordered or requested it was severely misplaced, and it held no interest for a demographic for whom Sgt. Pepper’s was probably a bit too weird.

Consisting of material on sound and its role in culture written over sixteen years, Left-Handed Blows compiles essays, liner notes, catalogue contributions, as well as most of the previously published content of the Russell-edited Logopandocy: The Journal of Vain Erudition, published by Ekskubalauron Press. Anyone familiar with Russell’s work will not be surprised to see a collection such as this reviewed amongst our usual selection of occult books, as his work has always had a stream of esotericism, qabalah and Hermeticism running through it, right down to the choice of Corpus Hermeticum as a record label name. And it is musings along these themes that provide the most interesting readings amongst these pages. 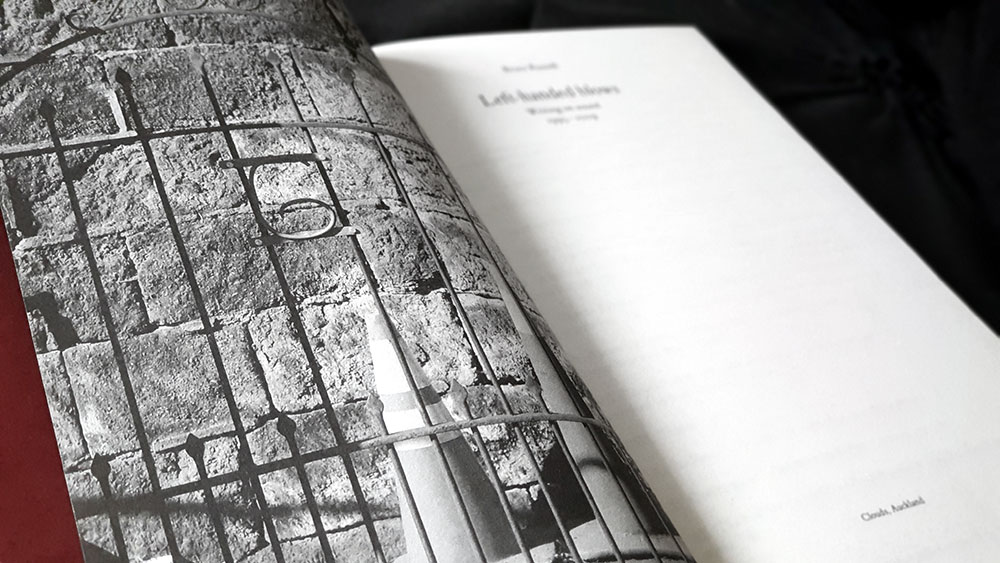 Russell begins with a dense and lengthy essay that bears the same title as this book, establishing theory and methodology and drawing on a variety of principally Marxist figures such as Guy Debord and György Lukács to discuss the idea of improvisation and its resulting improvised sound work (AKA noise) as not only a critique of music, but a form that perpetually critiques its own existence by its very method of creation. This theoretical investigation is intended by Russell to provide a prism through which the subsequent writings are viewed, though he warns the reader against expecting any coherent theory, choosing instead to refer to the various bits of content as ‘gilded splinters.’

As is perhaps typical of their origin in Logopandocy, some of the contributions here have a distinctly zine-like feel to them, such as the free noise manifesto What is free? from 1994, a ten point (with multiple subpoints) declaration originally published in the legendary Bananafish and then reprinted in Logopandocy. Another list is found in Contra-Fludd/contra-Kepler, presenting ten theses extolling the disharmony of the spheres, where noise and improvisation is set in opposition to the mechanistic vision of the music of the spheres, freeing humanity to make music no longer celestial but human. Adorably, what are brief, usually one-sentence statements actually run to four pages due to the extensive footnotes that rise towards these ten theses like a threatening tide of small point-size information; providing a thorough background to the references to Pythagoras, Robert Fludd, Johannes Kepler and the like. Finally, another numbered list is found in Russell’s notes towards an epistemology of tape music, Time under the rule of the commodity, which concludes by stating that by foregrounding the medium and its method of operation, tape music makes destruction and human choice central to art. 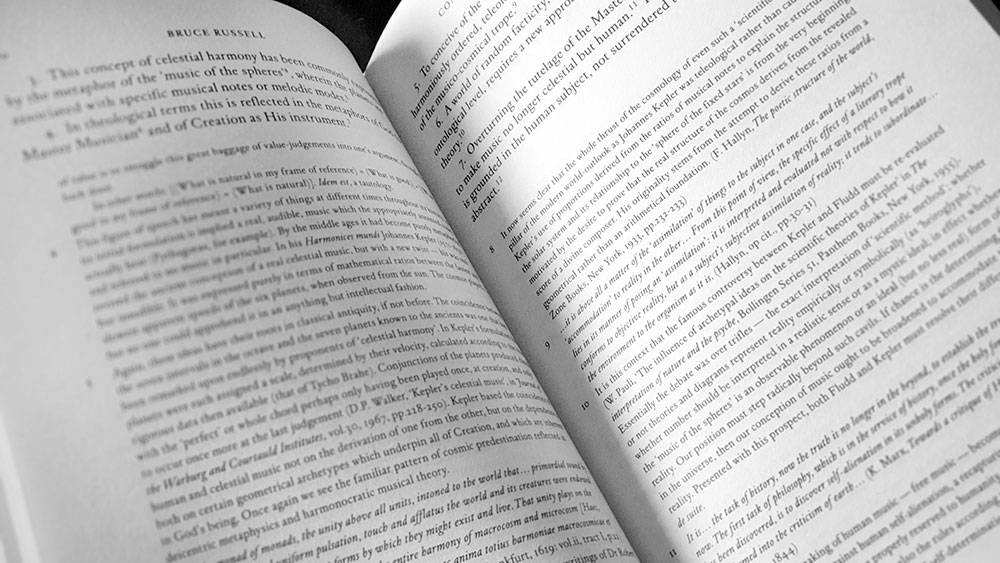 Three of the contributions here take the form of interviews or conversations, allowing for a consideration of many of the themes featured elsewhere in these pages but in an informal and, well, conversational manner. The more conventional of these is an interview by Marco Fusinato for Axe magazine in which Russell describes performance process in practical terms, detailing his different approaches in the Dead C. and A Handful of Dust, as well as providing information about the Lyttelton circle of musicians and his labels Xpressway and Corpus Hermeticum. It is the most rock musician-like interview here, and the other two focus more acutely on the theoretical. In a dialogue with Alastair Galbraith, a frequent collaborator with Russel as one half of A Handful of Dust, the two muse on improvisation and its virtues, with Galbraith approaching the metaphysical by describing how randomness opens realms within which the very randomness creates its own melodies, almost as a sentient spirit operating on those who are open to its influence. Improvisation, structure and randomness is also considered in a 1993 conversation with Russell led by Danny Butt, now Associate Director (Research) at Victoria College of the Arts but also a one-time member of Flies Inside The Sun and one half of Tanaka-Nixon Meeting with Michael Morley. Here the conversation turns to Russell’s interest in neo-Platonism, Hermeticism and the philosophia naturalis of Fludd and others, not as a conscious metaphysical justification for, as he describes it, “this kind of din,” but as an unintended intersection betwixt musical praxis and philosophical truths. Russell reveals a love and sympathy for the worldviews professed by these archaic predecessors, ones which fell quickly away with the emergence of the materialistic materialism of Cartesian thought and the various aspects of Newtonianism that inform the modern scientific paradigm. While he doesn’t subscribe to these older ideas in their entirety, he laments the now lost holistic principles and attendant concepts of the macrocosm and microcosm, seeking to develop a dialogue between the worlds of then and now.

In To think is to speculate with images, Russell details another intersection of his praxis with Hermeticism in a discussion of the search for a reformed philosophical language that would replicate the universal and presumably divine language spoken in Eden before the confusion of tongues at the Tower of Babel. For Russell, the way in which Giordano Bruno, and subsequently Fludd, designated post-Babel languages as less capable of “communicating a profound level of intersubjective meaning than images” mirrors his belief in improvisation. The use of improvisation, he argues, is closer to real, direct communication, whereas the rules of academic musical tradition create impediments to this lingua adamic-like flow between musician and listener with the use of premeditation and intellectual mediation. 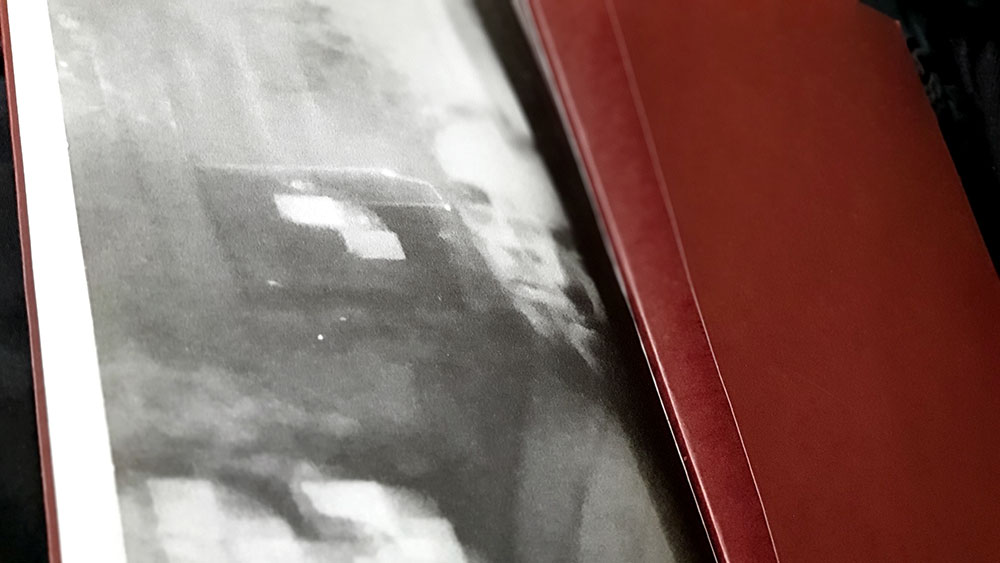 Not all the writings here directly concern Russell’s own music, and there are liner notes for several releases by Ralf Wehowsky as well as considerations of two of Russell’s fellow New Zealanders: Douglas Lilburn and Campbell Kneale of Birchville Cat Motel. In a piece I remember reading in The Wire in 2005, Russell reviews the then freshly-released complete electronic works of Lilburn, arguably New Zealand’s greatest composer, and someone he memorably describes as wearing an acrylic sweater and looking like his uncle. Russell’s discussion of Kneale, meanwhile, is from the liner notes to the Birchville Cat Motel album Gunpowder Temple of Heaven, whose hallucinatory slabs of noise are given a religious analogue: the massive drones of metal pipe organs, the cavernous acoustics of cathedrals, the walls of Jericho succumbing to Joshua’s barrage of sounding trumpet.

The writings in Left-Handed Blows are never long, providing easily digested little excursion into particular areas of Russell’s interest, but with each running to usually three pages or more, they are always complete and fully realised. Russell’s ability to draw from Marxist philosophy, various strands of occultism, as well as music both conventional and atypical provides the collection with diverse frames of reference that makes you feel smarter just for reading it. 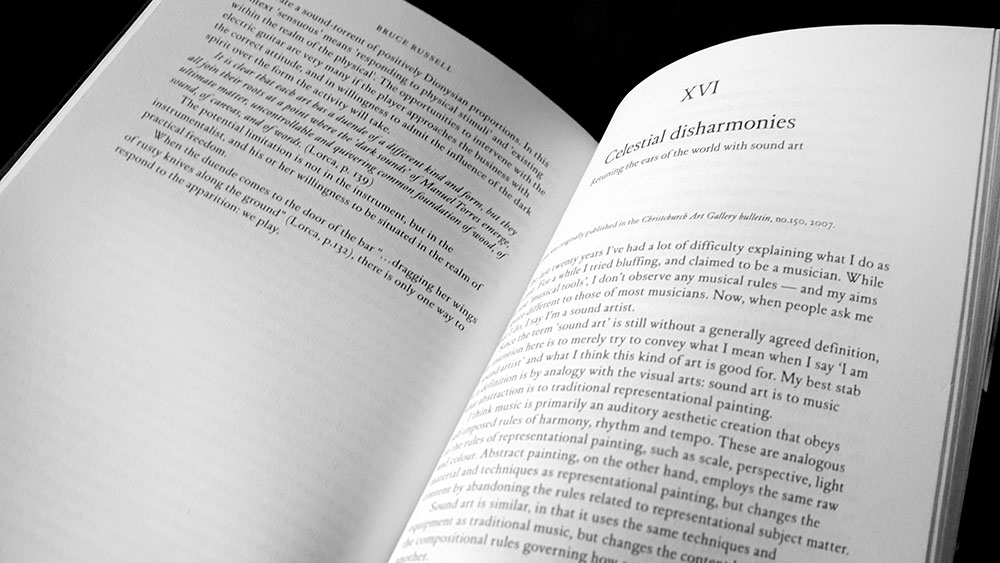 Funded by Creative New Zealand and supported by the Christchurch Polytechnic Institute of Technology, Left-Handed Blows was designed by Warren Olds and sub-edited by Gwynneth Porter. It is bound in a rich brown card with full-page French flaps, and the title and author foiled in gold on both the front and rear covers. Double-sided end-papers feature full page black and white photographs by Russell, providing the book’s only visual accompaniment.

The soundtrack for this review is The Dead C: Vain, Erudite and Stupid: Selected Works 1987?-?2005