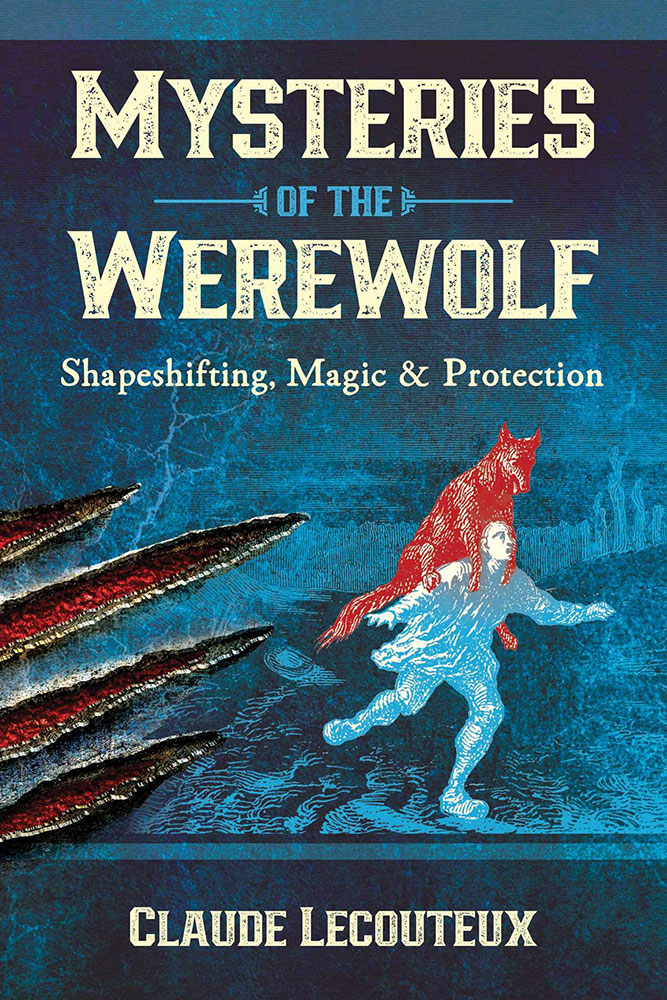 Originally published in 2008 as Elle Courait le Garou: Lycanthropes, hommes-ours, hommes-tigres, Claude Lecouteux’s exploration of werewolves sees its first English translation with this 2021 edition from Inner Traditions; now featuring a title and subtitle more appealing to that publisher’s audience. Lecoutex is a familiar figure in the world of European folklore, with Inner Traditions having issued the English translation of his various works on dwarves, the spirits of the dead, the wild hunt and the almost alliterative triumvirate of witches, werewolves and fairies. Despite their mass market status as Inner Tradition titles, each of these volumes is a valuable resource, with Lecouteux displaying an easy erudition and familiarity with his subject.

Mysteries of the Werewolf differs from his other works both in its specificity and its approach. Whereas previous titles have broadly and discursively covered their subject matter, Mysteries of the Werewolf feels more like a reference work, being largely a source book or collection of case studies. An extensive introduction provides the only concentrated section of prose via an outline of werewolf history, touching on various appearances of the phenomena in myth, legend, and contemporary cinema, as well as general discussions of werewolf belief, trials and the explanations given for them.

Subsequent chapters take the case study approach, grouping the entries under Lecouteux’s broad headings of becoming a werewolf, diabolical pacts and spells, clothing and hides, being discovered as a werewolf, were-creatures and doubles, and finally, the freeing, healing or expulsion of werewolves. Each entry is preceded with a title (the majority of which are of Lecouteux’s own devising), and a subtitle giving location and date, but infuriatingly, there is no mention of the actual source. Instead, where available, the subtitle is endnoted and the corresponding source can be found by laboriously flicking through to the notes near the conclusion of the book. Incorporating the title and author, sans the publishing information, into the heading would have provided considerably more context for each nugget of knowledge, which are now rendered practically anonymous. Knowing at a glance, for example, that the first entry on Irish werewolves comes from Nennius, whilst a different one comes from Gerald of Wales, gives the reader a surprising amount of information, contextualising the information within its place and time and also pointing potentially to the author’s intent or credibility. Without it, and without the wearing out of fingers whilst trying to find the endnotes, one might assume that the references are nothing more than relatively recent summaries, rather than primary sources. 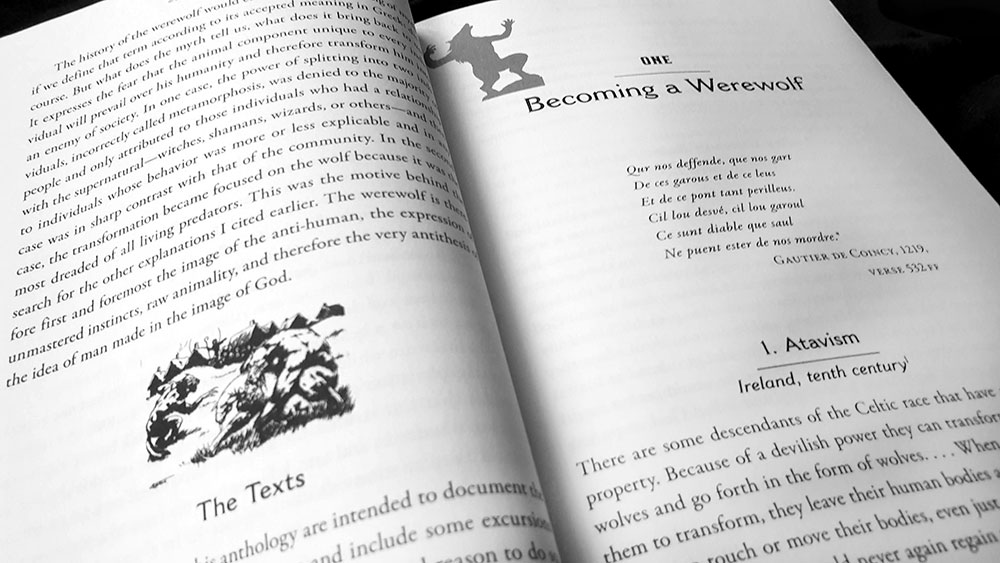 This lack of background information renders some of the entries incomprehensible, or at the very least doesn’t help the reader understand what is happening in a particular narrative. This is most evident in an entry titled The Bastards, unhelpfully subtitled “France, twentieth century,” which is actually an excerpt from Henri Pourrat’s Légendes du pays vert. Now sheared of its context, the reader is given what appear to be three different summaries of werewolf activity confusingly interspersed with elements of dialogue that assumes the reader has better bearings within the narrative than they conceivably do. Considering that the value of a book such as this is as a reference, the relative anonymity of each entry makes its annoyingly unfit for purpose. 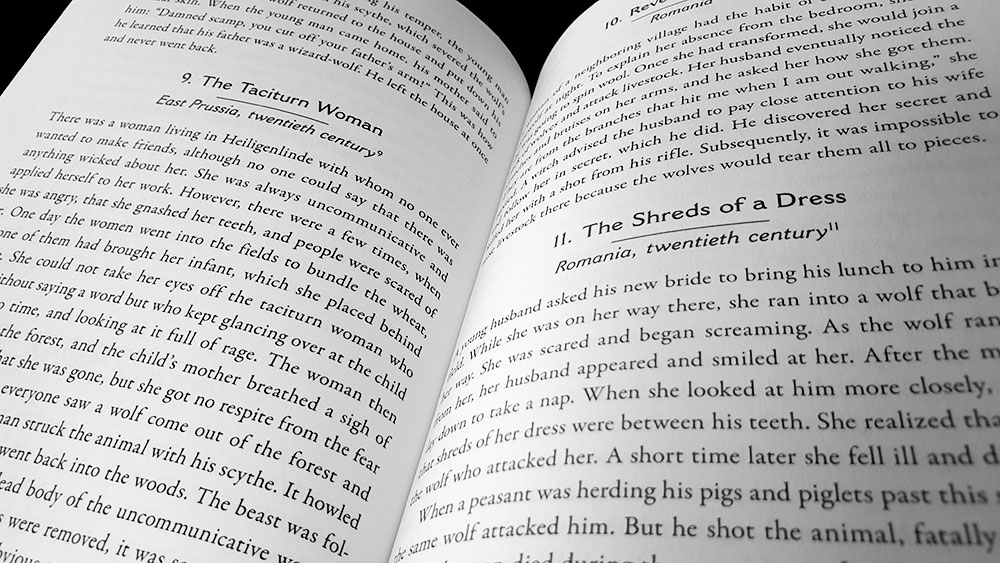 While the recurring themes found in the groupings of each chapter should be self-evident, it is surprising that Lecouteux doesn’t provide anything in the way of summary or analysis in order to draw out connections or highlight differences. Instead, save for the odd footnote, these excerpts are presented unordered and as is, with no geographical or temporal groupings, thereby sending the reader careening through space and time. Not all accounts are from Europe and Scandinavia, and Lecouteux does occasionally travel further afield to China and Japan, adding to the disorientating feeling. These entries are somewhat incongruous giving that they mainly deal with transformation into tigers, rather than wolves, and while their inclusion under the previous edition’s subtitle of Lycanthropes, hommes-ours, hommes-tigres is appropriate, here they feel out of place in a discussion of the ‘mysteries of the werewolf.’ This is especially so given that, other than their transformation into an animal, the weretiger shares little of the folkloric elements associated with the European werewolf, and if said animal transformation is the only prerequisite, you could include all manner of things, even, why not, the Animorphs young adult fiction series from the 1990s? That’d be fun. 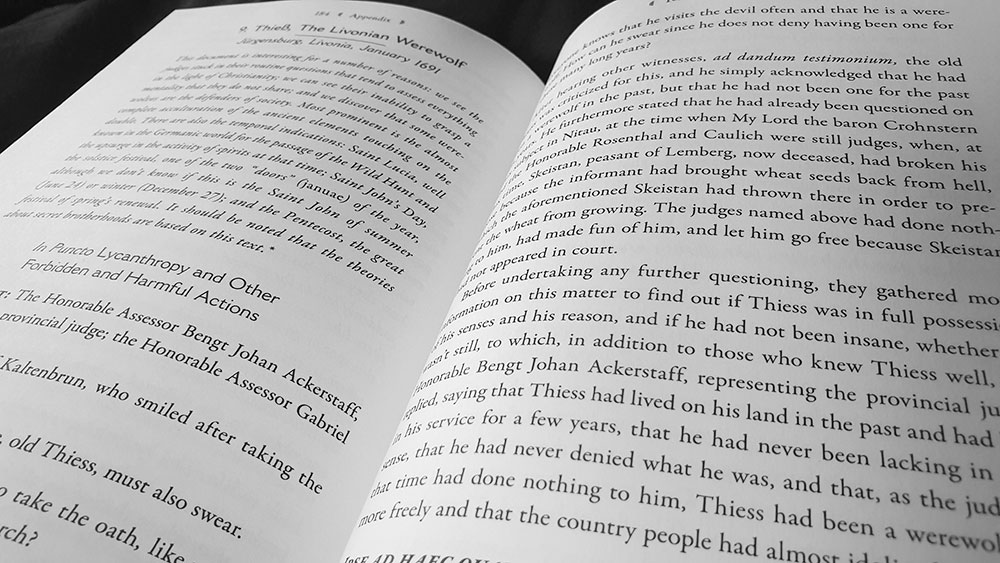 Showing that he’s far from done with providing source material, Lecouteux concludes Mysteries of the Werewolf with an extensive appendix of testimonials from the fifteenth to nineteenth centuries. These are, once again, listed without author or source, information that is only endnoted, and given that these are all intended as direct transcripts, this omission seem even more egregious here, shearing each piece of its context. This is exacerbated by the way in which some entries do open with minor background information from Lecouteux, but this is inconsistently applied and others were apparently not so deserving.

As stressed ad nauseum throughout this review, whilst promising, Mysteries of the Werewolf is hamstrung in its mission of being a thorough reference work due to its, well, lack of immediate references. This can hamper not only its usability but also its readability, as the infuriatingly anonymous appearance of the sources leave the reader contextually untethered, until eventually they’re unwilling to go on if every entry necessitates thumbing through the rear of the book for missing relevancy. If one isn’t as perturbed by this as your humble reviewer is, then Mysteries of the Werewolf can be viewed as a valuable reference book with a near complete, or at least highly representative, collection of European werewolf lore, with weretigers thrown in for fun. 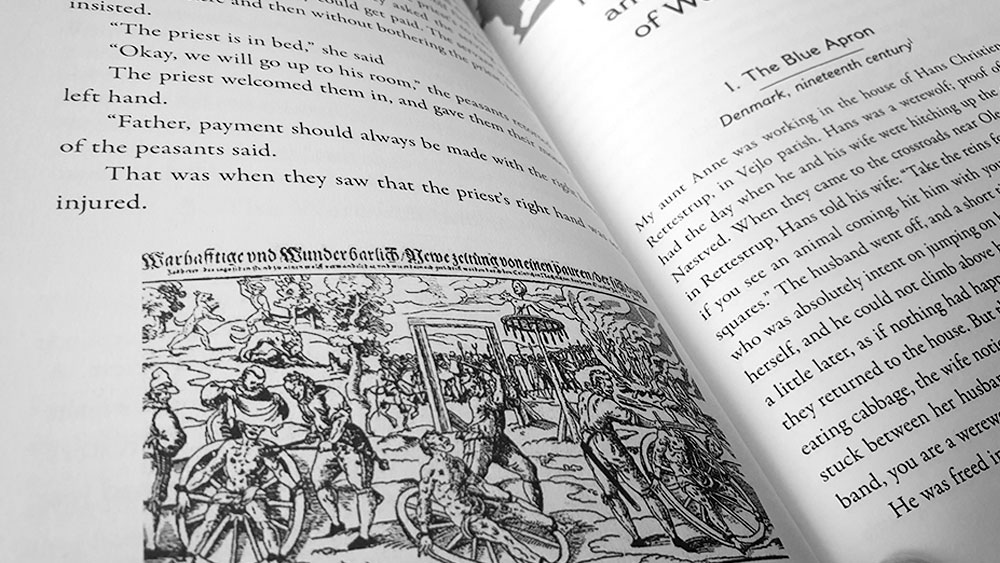 Mysteries of the Werewolf is available as an ebook while the only print version is as a hardcover edition with a pleasant blue-hued, claw-marked dustjacket over a blue binding; and the title foiled in silver on the spine. Text design and layout comes at the hand of Debbie Glogover, with body set in Garamond, with Cantoria and Fabello as internal display faces, and with the strong fang-like serif stylings of Bronzier for the title. Woodcuts of varying quality are sprinkled throughout the pages as the only form of illustration.