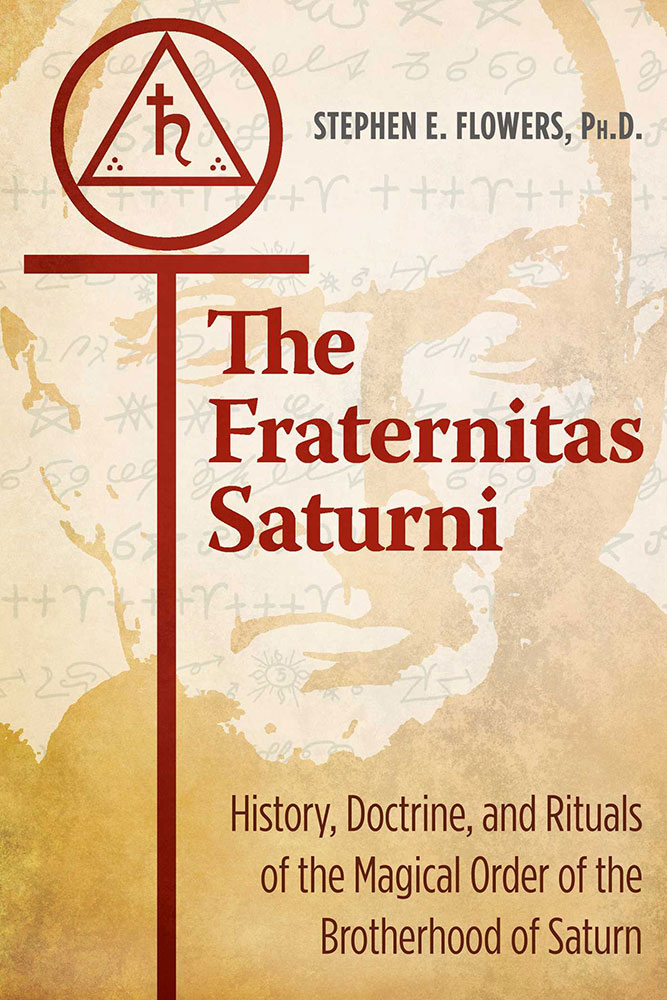 Verbosely subtitled History, Doctrine, and Rituals of the Magical Order of the Brotherhood of Saturn, Stephen E. Flowers’ The Fraternitas Saturni is the fourth edition of a work originally released by Llewellyn in 1990 as Fire and Ice, with the equally prolix subtitle of The History, Structure, and Rituals of Germany’s Most Influential Modern Magical Order – The Brotherhood of Saturn. Since that initial version, the work has been published again by Llewellyn in 1994, and then in a revised edition by Runa Raven Press in 2006. This 2018 incarnation is both revised and expanded, as evidenced by the already lengthy appendices lettered from ‘a’ to ‘i’ now extending to ‘l.’

At its release, as Flowers notes in his introduction, Fire and Ice was the first book to discuss the Fraternitas Saturni at length, and it would be hard to think of any title that has done much more since. In the English speaking world, it is Flowers who still seems to have the monopoly on this particular field of German occultism, with all the risks that having a single interlocutor entails. As Flower also acknowledges, the material contained in The Fraternitas Saturni dates from before 1969, so doesn’t necessarily reflect the beliefs and practices of the order after that date, or today.

One of the first additions to this new edition is found in the initial consideration of the occult milieu from which the Fraternitas Saturni emerged. Here, in addition to his previous discussion of quasi-Masonic lodges such as the Freemasonic Order of the Golden Centurium (FOGC) and obviously the Ordo Templi Orientis, Flowers now discusses the neglected but influential role of Adonism. He devotes several illustrated pages to this school of magical thought and its foremost proponents, Franz Sättler’s Adonistische Gesellschaft, as well as giving still further information as an appendix.

Other changes are largely subtle, with the one thing of obvious note being the amount of new images added to the text; something very much in evidence in the Adonism section. The pictorial elements in the original Fire and Ice were limited to a few diagrams, already well-worn photographs of Gregorius and the bust of GOTOS, and two hand drawn illustrations by James Allen Chisholm. All of these recur here, but in better quality (save for Chisholm’s pictures which look a little 8bit), and they’re joined by a swathe of supporting images, including examples of publications and portraits of key figures. 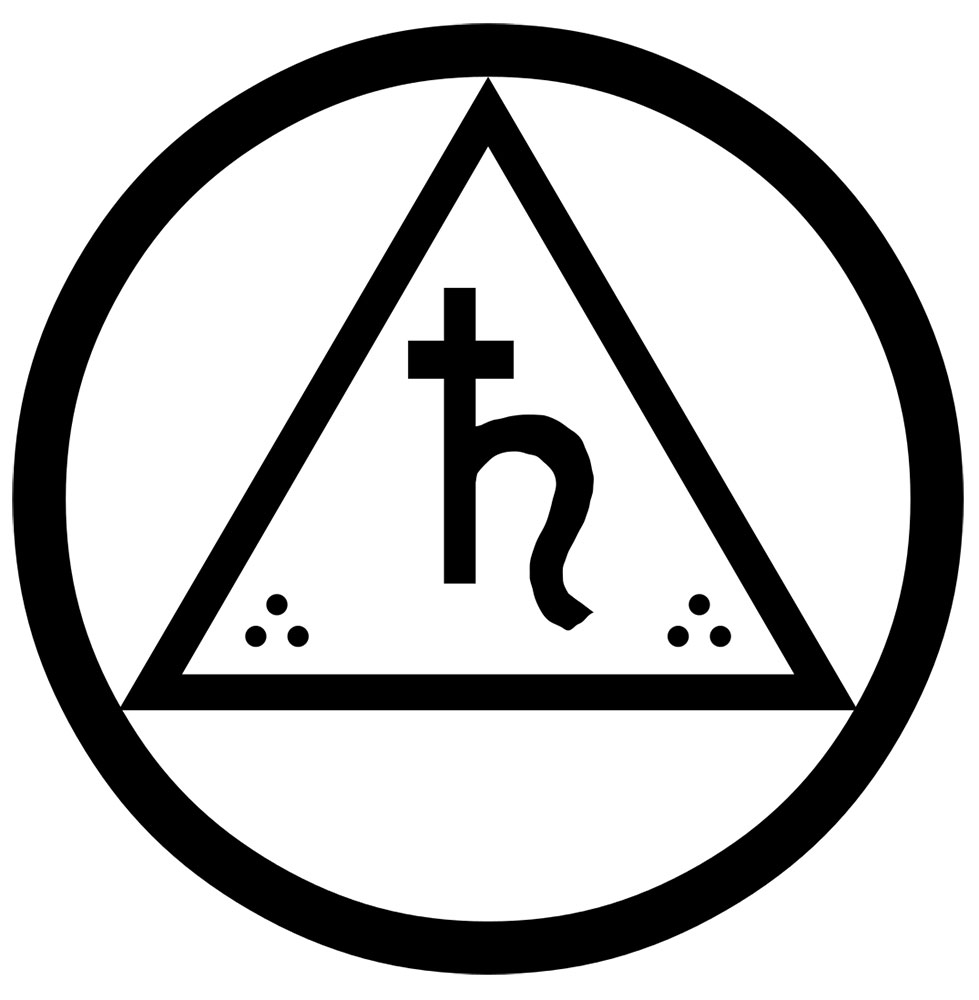 The Fraternitas Saturni begins with the aforementioned discussion of the occult subculture that birthed the order, with Flowers providing a thorough overview of German occultism of the period, noting in particular the way in which Thelema infused some of the major variants. While the OTO absorbed Thelema to become Crowley’s principle magickal order, the Fraternitas Saturni embraced the philosophy, but neither its cosmology, nor Uncle Al’s suzerainty. Instead, as Flowers details, the order promulgated a mythos that merged Gnosticism with Luciferianism, in which Saturnus is a demiurgic figure associated, not just with the typical saturnian characteristics of melancholic introspection and initiation, but with Lucifer (as the sphere’s highest octave) and Satan (as its lowest). For those with aphotic inclinations, there’s a certain appeal to this cosmology, with its combination of metaphysical speculation, plutonian-hued deity forms, and the handy appeal to authority that arises from its use by an order now almost a century old.

The other particularly striking aspect of the order’s belief system, and one which is fairly unique in its application, is the use of the egregor GOTOS, whose name was an acronym based on the name of the order’s 33° grade, Gradus Ordinis Templi Orientis Templi. Considered an embodiment of the order, but also as a pre-existing entity attached to Saturn, the GOTOS egregore took the place of the ascended masters and secret chiefs so typical of other occult organisations of the time, guiding initiates through their journey. The difference being that GOTOS was understood to be a thought-form manifested by the order’s members, rather than some dubious dudes in robes kicking it on a mountain somewhere in far off lands.

Subsequent chapters in The Fraternitas Saturni explore more of the order’s beliefs (but more from a philosophical rather than cosmological perspective), and the structure of the order (including a detailed listing of grades). An outline of their actual magical work and rituals follows and these, as one would expect, have a strong focus on masonic-style lodge work, but there is also a sacerdotal element, with an extensive list of liturgy-rich sacraments that includes the use of various type of elemental eucharist. Two other areas of ritual in which the Fraternitas Saturni are known are electrical magic (which Flowers touches on all-too briefly) and sexual magic (for which two rites are outlined).

Including index and bibliography, The Fraternitas Saturni runs to 207 pages, but just over half of that comprises the book proper, with the rest consisting of extensive appendices. These include several long Fraternitas Saturni rituals (three masses and the Gradus Pentalphae), various letters between Crowley and order founder Gregor A. Gregorius, and instead of his pragmatic suggestions regarding sex magic from 1990, Flowers includes an initiation rite from the Freemasonic Order of the Golden Centurium. The other appendices new to this edition include more details about Rosicrucianism and the Bavarian Illuminati, and the welcomed consideration of Adonism. There are also some lessons for neophytes from order member Master Pacitius (artist, architect and the producer and production designer for F. W. Murnau’s Nosferatu, Albin Grau), which are provided as one of the rare example of his written occult work.

The cover of the original Fire and Ice in 1990 featured an evocative painting by N. Taylor Blanchard, a darkly hued view of the sigil of Saturn suspended against a range of mountains, all lit from behind by an effulgent light. It was a mysterious image that, other than the Saturn sigil, didn’t seem to reflect too much that was specific to the Fraternitas Saturni, and was very much of its time; with many of the books by Flowers (as well as other Llewellyn authors) employing painted cover art, some better than others. The cover of this 2018 version is also of its time, with the oils of the 1980s and 1990s giving way to a strong graphic look that sets the title and sigils (highlighted with a subtle spot varnish) over a low opacity image of the bust of the GOTOS egregore. It’s nice, a simple but classy treatment, as is true of the covers of many books from Inner Traditions. 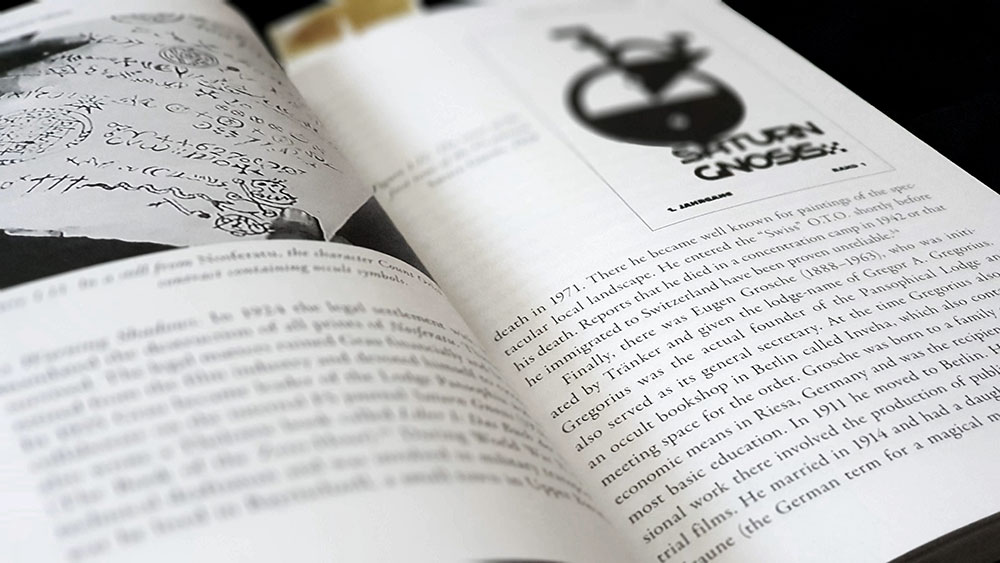 Inside, the copy is treated with an equally adept hand by the good folks at Inner Tradition. Whereas the original Fire and Ice had Llewellyn’s typical-for-the-time solid and functional layout with a slightly too large, almost slab serif face, and not a lot of space around it, The Fraternitas Saturni uses a classic serif at a respectable size for the body, with subtitles in a san serif, housed in roomy, but not too roomy, margins. The hierarchy makes it eminently more readable than its predecessor, and the reduced page count and larger page size, makes it more pleasant to hold.

This new edition of The Fraternitas Saturni makes for a worthwhile acquisition, whether you don’t have its previous incarnations, or simply want an excuse to reread it, now some 28 years after you may have read it the first time. As testified, the redesign from Inner Traditions will assist in this, making it feel not just eminently more readable, but just a little bit fresh and new. Throughout the book, Flowers writes with an unadorned, thoroughly competent style, with everything presented in a somewhat matter of fact manner.

One Response to The Fraternitas Saturni – Stephen E. Flowers