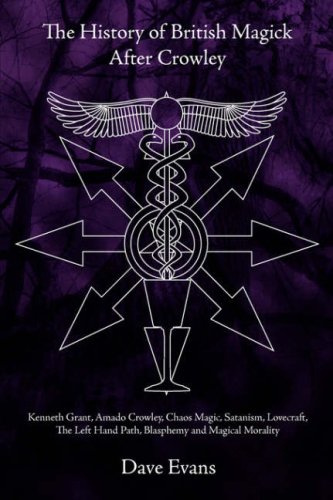 I was really looking forward to reading this book. If i recall correctly, it was one of those “spoil myself with one expensive item” items in an Amazon order of more modestly priced books and CDs. I mean, 435 pages of post-Crowley magickal history, what wonders it must explore, what depth it must go to in what must surely be the definitive work on modern occultism. Sadly, this turned out to be wishful thinking that led to my hopes being dashed more thoroughly than they perhaps should have been. Perhaps my biggest mistake was not paying close enough attention to the publishers, who i now see are the print-on-demand Lightning Source. I had assumed that the higher than average price was because it had been released via some academic publishing house, rather than being the result of the over-pricing that occurs in some POD; and must surely make a mockery of that supposedly frugal financial model. This lack of a real publisher now makes sense of some of the annoying elements in the content that surely any proof-reader would have pointed out; more about those in scurulous detail later.

Dave Evans is apparently a practising magician as well as a “professional academic researcher,” whose supervisor at Bristol University is Ronald Hutton. I can’t imagine that Hutton supervised much of the final work, though, at least not with a red pen in hand, ready to make suggestions. This is Evans’ PhD thesis turned into a book, and it suffers many of the problems associated with publishing an academic paper as a book; though Hutton has shown that you can write about magick academically without it being tiresome or losing any of the thrill of the subject. The biggest of the academic problems this book has is its attempts at providing wider context and marking out process. In his Triumph of the Moon, Hutton does this in the early chapters, extensively setting the birth of Wicca in the colonial and post-colonial milieu in which ideas central to Wicca, such as Pan as a catch-all god of a personified spirit of Nature, had their origins. But where Hutton is effective in authoritatively setting the context upon which his later chapters will be based, Evans seems to have cribbed stuff he may have written for other papers and inserted it to give the appearance of ponderous academic digression or scene setting. There’s a particularly tedious and lengthy section on blasphemy and morality which really has very little relevance to the subject of modern magick of any stripe; with even Satanism, one of the paths mentioned in the book, tending to stray away from it once the thrill of a Black Mass has worn off. I mean, what’s the point of this extensive survey of blasphemy when Evans himself mentions that despite his litigious nature, it was never a charge of blasphemy that saw Crowley in court. Genesis P-Orridge is also mentioned in this section, but is ridiculously prefaced with the self-defeating caveat “Although not prosecuted for actual blasphemy,” before going on to talk about the bottom-feeding Channel 4 documentary that saw hir exiled from the UK. So, no modern magickian has been charged with blasphemy, probably because one, prosecutors don’t really care what some loonies get up to own their own (unless it’s safe, sane and consensual sex, amirite?) and two, because blasphemy plays such a minuscule role in magickal practise.

Along with this useless digression about blasphemy and morality, there’s 50 pages of scene-setting twaddle that concludes with some equally pointless blather about the meaning of “the left hand path.” I mean, who really cares anymore? Does anyone really define themselves like that still, other than self-publishing demonalatry etc authors on Amazon.com? There’s an extensive survey of magickal practitioner’s definition of the left hand path, but the only thing that the thoroughness of it does is highlight the failing this book has in wasting time on useless information. But you ain’t seen nothing yet, folks, no siree.

Although the previous 200 pages have occassionally mentioned aspects of post-Crowley magick, they are but a preamble to what occurs now which is a concentrated study of particular magickal practitioners and movements. Who could be the first choice? What shining dark light from modern occultism could be going under the microscope? Yes, you guessed it, come on down Armado fucking Crowley. Yes, the man who claims to be Uncle Al’s biological son and sole magickal heir (sorry Caliphate, and apparently he wasn’t actually all that into Thelema anyway), but who no one takes seriously. You just have to read one of Armado’s books to know it’s all a rather pointless charade and that the Crowley in them bears little relationship to all other records of him (including his own). And it’s not as if Evans doesn’t know this. In fact, he spends page after page showing how Armado has lied about this, or falsified that. Again, it’s pointless. While it’s somewhat fun to see each of Armado’s falsehoods scandalously documented, why bother? We know he’s a liar, so should we really be surprised to find that, omg, he’s not a novelist or playright anymore than he’s a magician! Evans seems to have spent far too much time playing detective, trying to track Armado down from various leads about his legal name, before finally scoring the jackpot himself from the Properties window of a Microsoft Word doc that Armado himself had sent. Score! But a score of 0, because nobody cares. Armado gets 50 pages and then as he has done before, Evans shoots himself in his irony-oblivious foot by quoting Armado himself as a final jab: “there is not the least value in trying to use writers of ‘fiction’ as witnesses.” Well, 50 pages worth of value say differently, Mr Evans.

Evans then turns to Kenneth Grant (finally) and uses him to also talk about Austin Spare and the use of Lovecraft’s mythos in contemporary magick. There’s not much in the way of revelations about Grant here, and nothing that familiarity with Typhonian documents online won’t have already introduced someone to. But it’s good to have it all in one place and Evans seems quite proud of having the most pages in print about Grant; though he’s probably equally proud of the Armado word count too. From there, it’s a brief discussion about Chaos magick which made me realise just how old hat and ridiculously last century it now seems. Somehow i had imagined that the history of British Magick after Crowley was a much richer field than what Evans covers. Obviously he’s looking at magick in a ceremonial-Crowleyesque vein, so there’s little in the way of Druidism or Wicca/Witchcraft here, and equally obviously, Ronald Hutton has covered that area so well already. But even so, what about rune/Norse based magick, such as the Rune Gild UK, with both Freya Aswynn and Ian Read (as well as the whole neo/apocalyptic folk scene) having elements of Crowleyan influence in addition to the runic stuff. For that matter, why not look at Current 93, or a proper, rather than cursory, look at Gen and TOPY, or a consideration of Coil that goes deeper than referring to them as, i kid you not, a “magically-inspired rock band.” Yeah, i totally remember that time Jhonn Balance like totally shredded this mind-blowing guitar solo. Dude. I would think the fact that Caliphate OTO head William Breeze/Hymenaeus Beta has worked and performed with both Coil and Current 93 would suggest they deserve more than passing mentions as rock bands. Also totally absent is Shri Gurudev Mahendranath’s International Nath Order, which is a bit ridiculous considering Mahendranath (or Lawrence Miles, as his parents knew him) met Crowley, and the Nath system could be said to be informed by elements of Thelema. And despite having a brief section on Satanism, in which he’s far too kind on Anton La Vey, Evans doesn’t look at specifically British Satanism at all. No mention of Magda Graham, or the presence that the Temple of Set had in the UK. There’s one mention of the Order of Nine Angles, but only in a caveat stating that they and the TOS are “worthy of an entire PhD thesis rather than this tiny overview”. Well, maybe if there wasn’t 50 pages of Armado fucking Crowley and the same amount about blasphemy, then he could have done some proper research for at least a page or two instead of that cop out. In total, there’s a feeling of Evans not being quite as involved in British occulture as he tries to appear, with the focus strictly on the Typhonian OTO, Chaos, and out of left left left field, Armado Crowley.

But in all fairness, it’s not the content (or lack thereof) that bothers me the most about this book. It’s the writing. The lack of a proofreader is really obvious, and we’re not talking spelling or gramatical mistakes, but more the kind of things where another set of eyes would have said “maybe you don’t want to keep on doing that on every fucking page, you knob.” The real kicker is a Dan Brown-like(1)  need to introduce everyone as if they were appearing in an obituary: “Acclaimed wank artist, Freddy McFingers,” “Annoyingly pseudonym-happy bullshit merchant, Ramsey Dukes” (not real quotes, but the last one is the opinion the reader will eventually develop thanks to Evans’ constant references to him). But it’s not the sentence phrasing itself that’s all that annoying, it’s that Evans seems to think his readers have poor short term memories and reintroduces the same people again and again. Phil Hine seems to suffer worst of all and i began to dread references to him, as they would each time be prefaced by “Magician and author Phil Hine” or variations thereupon. I mean, i think the reader should be quite capable of remembering who Phil Hine is, and not needing a little job description in case they think Evans actually means international film star and surrealist painter Phil Hine, or the 35th president of the United States Phil Hine. I don’t know why magician and author Phil Hine seems to suffer this repeated prefacing more than anyone else, but it’s so bad that in one instance it actually happens on the same page to magician and author Phil Hine. Mercifully Crowley and Kenneth Grant are, apparently, big enough fish in this book that the reader doesn’t need to be reminded who they are. Poor Andrew Chumbley, though. Despite being mentioned several times already, by page 222, Evans feels we’ve forgotten who he might be, so he is introduced anew as “The late academic, author and modern magical practitioner of the ‘Sabbatic Craft’ Andrew Chumbley (1967-2004).” Thank goodness he didn’t collect stamps or own a cat or we’d be here all night.

And then there’s Lionel Snell, aka Ramsey Dukes and a bunch of other tedious pseudonyms, who is apparently Evans’ magickal guru. These are guru feet that Evans must spend a particularly long time sitting at because Snell is quoted extensively throughout the book to the point of annoyance. Even when it’s not something that really needed to be quoted to prove a self-evident principle, there he is; and often with the usual job description variations, sprinkled with various adjectives of praise.

So yes, not the successful exploration of post-Crowley magick that i had hoped for. Maybe Ronald Hutton will read his student’s work and realise he needs to do the subject justice.

1. I have never read a Dan Brown “novel” but gained this understanding of his inimical style from some lovely entries on Language Log, where his hamfisted writing is deliciously dissected.
The Dan Brown code and
Renowned author Dan Brown staggered through his formulaic opening sentence