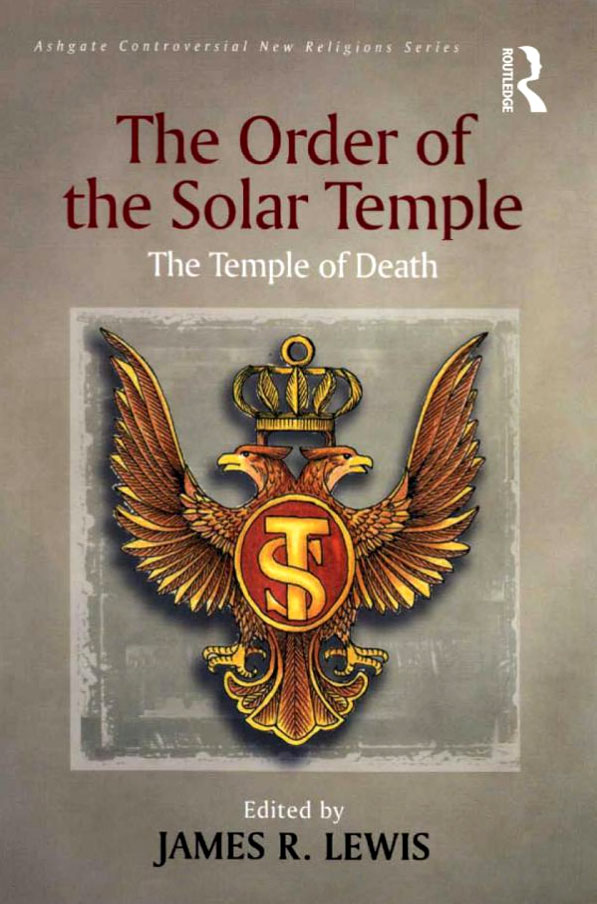 Part of Routledge’s New Religions series, this James R. Lewis-edited anthology brings together a variety of academic writers in discussion of the Switzerland and Quebec-based Order of the Solar Temple; along with a selection of Solar Temple documents, and some previously published articles edited anew here. As with the similarly named Solar Lodge of the Ordo Templi Orientis, there’s always something intriguing about the idea of magickal orders gone wrong, and things certainly went wrong for members of the Order of the Solar Temple. Formed in 1984, the Order of the Solar Temple came to the attention of the world ten years later when many of its members in both Europe and North America committed suicide or were murdered, while various order properties were set on fire.

Following an introduction by Lewis, things open with an archival piece by Jean-François Mayer from 1993, detailing the history of the various organisational guises, such as the exoteric Lausanne Club, that were associated with the more esoteric order, thereby placing it within a conventional new age milieu of healthy eating, homeopathy and Age of Aquarius earth changes; rather than the more hermetic and Templar-inspired incarnation the inner temple would later become. Naturally, there’s not much in what Mayer presents that foreshadows what would later occur with the Order of the Solar Temple (save for an unwittingly prescient note that the order, then so unknown, might prove of interest to later researchers), though when he describes members of the Lausanne Club innocently lighting a bonfire and dancing around it for St. John’s Day, one can’t help but think of the deadly role that fire would later play.

Considering its varied cast of contributors, The Order of the Solar Temple reads rather coherently, with each piece flowing into the next, building upon its predecessors by adding further details, but with very little in the way of redundancy; at least at the start. Mayer’s pre-1994 consideration of the order and its satellite clubs and groups is followed by Massimo Introvigne’s Ordeal by Fire: The Tragedy of the Solar Temple, which brings the narrative up to the events of 1994 with the first full recapping of what occurred. But Introvigne also prefaces this with a thorough history of the various Templar-inspired groups that preceded the Order of the Solar Temple, placing this side of the organisation within a stream of neo-Templarism and Freemasonry. With that said, though, the Order of the Solar Temple’s beliefs that do emerge throughout the book feel less like those of Templar-obsessed groups, with the usual combination of hermeticism, alchemy and Rosicrucianism, and rather a much more modern beast. Ascended masters, reincarnation and most dramatically of all, the transit to Sirius with members leaving behind their human bodies to assume new astral ‘solar bodies,’ speaks more to the post-Theosophy milieu of late-twentieth century New Age; just dressed up in white capes with red crosses, aided and abetted by a lot of sword waving.

Susan J. Palmer provides another fleshing out of the order’s inner intrigues by way of her Purity and Danger in the Solar Temple, which offers insights into some of the motivations and internal psychology of group members, all viewed through a sociological lens provided by the theories of the British anthropologist Mary Douglas. Douglas, whose work is alluded to in Palmer’s title, argued that the human body mirrors the collective body of a society and that in small and persecuted groups, any actual or perceived threat tends to be dealt with in purity rituals that govern the exits and entrances of the human body, enhancing the collective’s social control over the individual. This is a model that works rather well when applied to the insular and increasingly paranoid order, where control over bodies can be seen in the process of ‘defamilialisation,’ in which members were periodically endowed with new spiritual identities, previous incarnations whose past relationships or antipathies could have an effect on existing partnerships. The order’s affinity for a Gnostic-like asceticism and detachment from the body found its ultimate expression in the events of 1994, when the bodies of members were sloughed off in the final response to perceived external threats, and this attempt at purifying the body of the organisation was then compounded by the repeated use of fire to burn, to varying degrees of success, the corpses and order’s buildings.

John R. Hall and Philip Schuyler add to the discussion of the machinations within the order in The Mystical Apocalypse of the Solar Temple, a reprint of the fifth chapter of Hall’s Apocalypse Observed: Religious Movements and Violence in North America, Europe and Japan from 2000. As in that book, Hall and Schuyler show how the destructive end of a group like the Order of the Solar Temple cannot be simply attributed to the cliché of cult leaders with ulterior motives brainwashing the vulnerable; nor entirely to something inherently violent or destructive in a group’s beliefs. Rather, how society at large responds to this smaller microcosmic society plays a significant role, with the anti-cult hysteria generated by both the media and government departments exacerbating or even initiating conflict. Besides this premise, Hall and Schuyler’s contribution provides perhaps the most thorough recounting yet of the events leading up to 1994, whilst still managing to feel that it doesn’t excessively regurgitate or labour over details covered in previous chapters.

Jean-François Mayer provides another piece, The Dangers of Enlightenment: Apocalyptic Hopes and Anxieties in the Order of the Solar Temple, picking up from where his earlier pre-1994 essay left off, and now, with the benefit of hindsight, offers just that, hindsight, looking at some of the apocalyptic beliefs of the group and asking what signs there were of what later occurred. There’s a certain inevitable overlap of themes in the following Crises of Charismatic Authority and Millenarian Violence: The Case of the Order of the Solar Temple by John Walliss, where unlike Hall and Schuyler, he downplays the validity of any sense of persecution the order may have felt (relatively slight as it was), suggesting instead that the decision to perform the lethal transits was the result of crises of charismatic authority which, after defections and other waverings of order confidence, leaders Luc Jouret and Joseph Di Mambro sought to restore with an act of performative violence. As such, the transits can be seen as a final spectacular ritualistic gesture to the world, through which the order’s leaders tried to “reassert their authority over their followers and create some kind of legend for the order.” 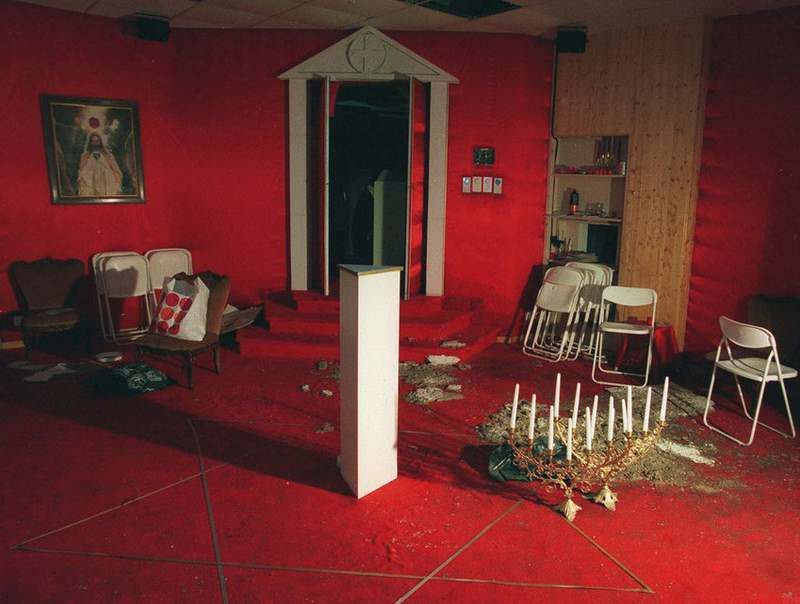 Henrik Bogdan, perhaps the only familiar name here from esoteric academia, explores a suitably occult theme in Death as Initiation: The Order of the Solar Temple and Rituals of Initiation, where he turns specifically to the initiatory rituals of Freemasonry. Bogdan gives a relatively thorough account of Freemasonry and Rosicrucianism, including basic rituals of the former, before ultimately bringing the discussion back to what he’s here for: how death is perceived in an initiatory manner within these types of groups, with specific reference to the Masonic legend of the murder of the master mason Hiram. This, in turn, leads to a consideration of some of the masonic-style rituals of the Order of the Solar Temple, each documented meticulously, with particular note being made of one in which the initiate is ominously taught that death is an illusion, a part of life, and one must be able to die in the profane world to be born into the cosmic world. While such language is by no means uncommon amongst metaphysical groups, Bogdan notes that the Order of the Solar Temple took it beyond the metaphorical with the transit becoming the ultimate ritual of initiation as members transformed into disincarnated Masters, creating a link between the worlds of men and the divine.

There’s the same sense of delving into occult roots in Sources of Doctrine in the Solar Temple by George D. Chryssides, though for someone with his credentials there’s a lot of minor and sloppy errors. There’s a belittling reference to Hatshepsut as an ‘Egyptian princess’ rather than as one of Egypt’s most successful pharaohs. Similarly, there’s a misrepresentation of Blavatsky’s Isis Unveiled as a book that combines ancient Egyptian ideas with eastern spirituality, when the Egyptian section is but one small part of a wider consideration of various strands of Western occult traditions, alongside a history and critique of Christianity; a rookie mistake, perhaps, given the title, but really? Then there’s a strange reference to the Templar’s suppressing Catharism as their last crusade, which seems unlikely, given that it runs counter to their whole raison d’être as bankers and protectors of pilgrims to the Holy Land; and considering that what one could consider as one of their final campaigns was an unsuccessful one fighting off a Mamluk invasion on the other side of the continent in Armenia; followed by further losses of bases in the eastern Mediterranean. The most head scratching statement of all comes when Chryssides, or his editor, so poorly summarises one conspiracy theory about the Order of the Solar Temple that it inelegantly depicts extra-terrestrials building unexplained subterranean chambers (giving the reader the impression that he’s talking about ritual chambers used by the order in Switzerland, not in Nevada as the original theory has it; sigh, it’s a long story better summarised elsewhere in the book), with Jimmy Carter seemingly described at the time of the transits as the “then president”, who, with the CIA at his command, was responsible for the deaths as part of a cover-up.

At this point, things feel like they’ve reached Maximum Templar Saturation (a killer band name if ever there was one) and there can’t be much more to say. This certainly turns out to be the case with the final two essays not contributing much that hasn’t already been said. Marc Labelle’s The Ordre du Temple Solaire and the Quest for the Absolute is a muddled read with tense shifting relentlessly in a space riddled with non sequiturs and anacoluthon, reading as if it was translated from another language and not thoroughly proofed. Meanwhile, Sects, Media and the End of the World by Roland J. Campiche has little to say other than ‘media bad,’ an original sentiment to be sure.

The Order of the Solar Temple concludes with its appendix of order documents, beginning with a letter sent to 60 journalists, scholars, and government officials the morning after the fires in 1994. One part esoteric exegesis, one part paranoid invective against the order’s enemies, there’s a certainty in the words, but also a baffled desperation at the tribulations inflicted upon them by various external ne’er-do-wells. The second document here is for the Ritual for the Donning of the Talar and the Cross, referenced extensively in Bogdan’s essay, which provides an interesting insight into the order’s approach to ritual, part masonic fancy dress, part Catholic pomp and liturgy.