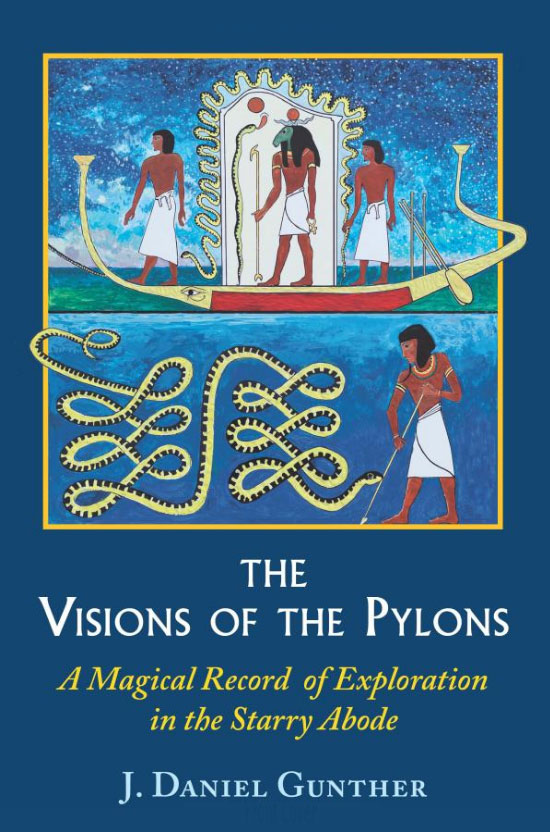 Gloriously subtitled A Magical Record of Exploration in the Starry Abode, J. Daniel Gunther’s Visions of the Pylons is a record of magical workings undertaken in the mid-1970s by the author and his scribe, Richard Gernon. The pylons in questions are twelve underworld gates, delineated in The Book of Pylons (or Book of Gates), an Ancient Egyptian funerary text that describes the nocturnal journey of a soul into the next world. This passage through the Duant mirrors the nightly underworld journey of the sun, with each gate marking an hour in this long night of the soul. Each of these gates is associated with a different goddess (whose characteristics the deceased must recognise), thus making the text and its journey a fitting initiatory narrative.

For Gunther, the pylons are not simply an Egyptian system, but relate to other psychocosms and magickal worldviews employed in Western occultism, in particular the Qabbalah. During his initial exploration of the system Gunther tentatively identified the first four pylons as the final four sephiroth of the Qabbalistic Tree of Life, but following a suggestion by his then A.:.A.:. instructor, Marcelo Ramos Motta, he reimagined them as the quarternal elemental gates of the single sephira of Malkuth. In a continuation of this correspondence, Gunther would subsequently identify the next three pylons as the sephira of Yesod, Hod and Netzach. It is worth noting that this is not simply a case of like-for-like sympathies between the two systems, and instead, Gunther integrates the two, arguing that the pylons contain internal gateways that provide ingress to the higher planes of the Tree of Life (as well as the thirty aethyrs of Enochian magick) without the use of the traditional pathways between spheres. 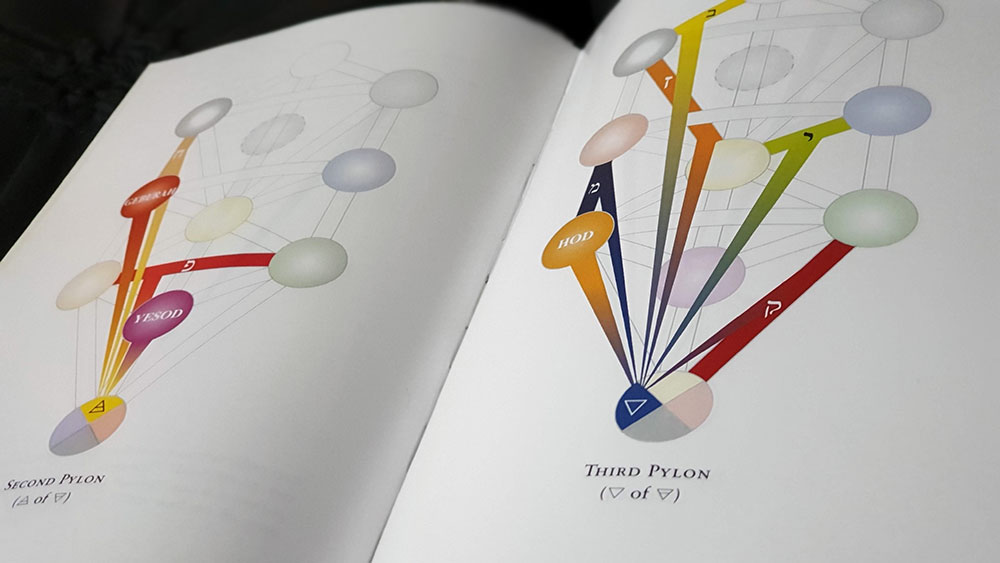 The record here is an incomplete journey through the pylons, as only seven of the twelve are explored (though two are scryed twice), with Gunther at the time not being permitted to enter the final five; save, he says, for a “fleeting glimpse of the Hold Bridal Chamber (Tiphereth).” He does, though, provide the means to enter all of them and this, the practical side of things, forms a substantial series of appendices, the contents of which are otherwise barely touched on in the preceding recounting of the pylon visions. Each of the guardians is given a sigil, derived from a 5×5 grid composed of phonetic renderings of the Egyptian hieroglyphic alphabet, with the design emerging from connecting the consonants of the name; as one would when using planetary magic squares for a similar purpose. This can lead to some pleasing sigils but also, given vagaries of name length and the placement of the letters in the grid, some rather less than pleasing ones; yes, I’m looking at you, Yethy-ma-eiri-fa, go home, you’re drunk. Each sigil, along with the hieroglyphic version of the guardian’s name, is to be inscribed on a wax pantacle, much as one would in following Crowley’s instructions in Liber A, and this object becomes the focus for exploration of that pylon. This exploration follows a fairly standard Thelema-tinged Western magic approach: corners are invoked, signs of the crux asanta, adoration and silence are made, a sacrament of saffron cakes and honey milk is partaken off (recipe included), and visions ensue; with seer and scribe breaking the respective pantacle in half at the conclusion. 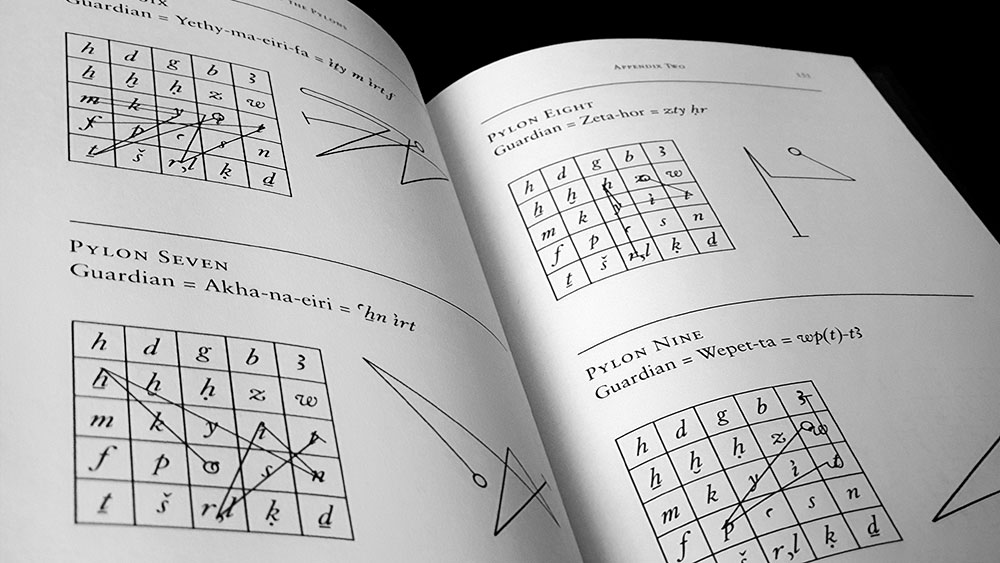 The incongruity in the ritual elements is carried over to Gunther’s record of the visions themselves, where the imagery and the language itself feels more European than Egyptian, save for the occasional appearance of familiar Egyptian entities and iconography. Due to the appeal of the archaic tones of the King James translation of the Bible, the language used here is closer to a facsimile of seventeenth century English than anything one can imagine being spoken by an Egyptian deity; something which Gunther does acknowledge. Similarly, in matters of imagery, angels abound as well as a veritable cornucopia of Western esotericism worthy of Uncle Al’s own magpie-like tendencies: Greek mythology, tarot symbolism, bits of Enochian here, a little I Ching there, Hebrew Hebrew everywhere. Despite giving their names in the creation of the sigils used to enter these gates, the traditional guardians of these pylons don’t seem to play a significant or overwhelmingly identifiable role in these visions, giving way to a more general melange of Thelemic motifs.

Like peeking into someone’s dream journal, it often feels slightly intrusive to read the accounts of other people’s magical visions, especially if you subscribe to the psychological model and see it all as the workings of the unconscious and subconscious; and less graciously, perhaps even the conscious. There is an element of that here, but in general, the visions for each pylon are so suffused with portentous statements, complex imagery and the occasional flourish of gematria that if one was to unsympathetically dismiss this as all someone’s active imagination, you’d still have to give them top marks for effort. All of this imagery is fully footnoted, with Gunther providing a constant and thorough commentary on the meaning and symbolism of everything encountered. 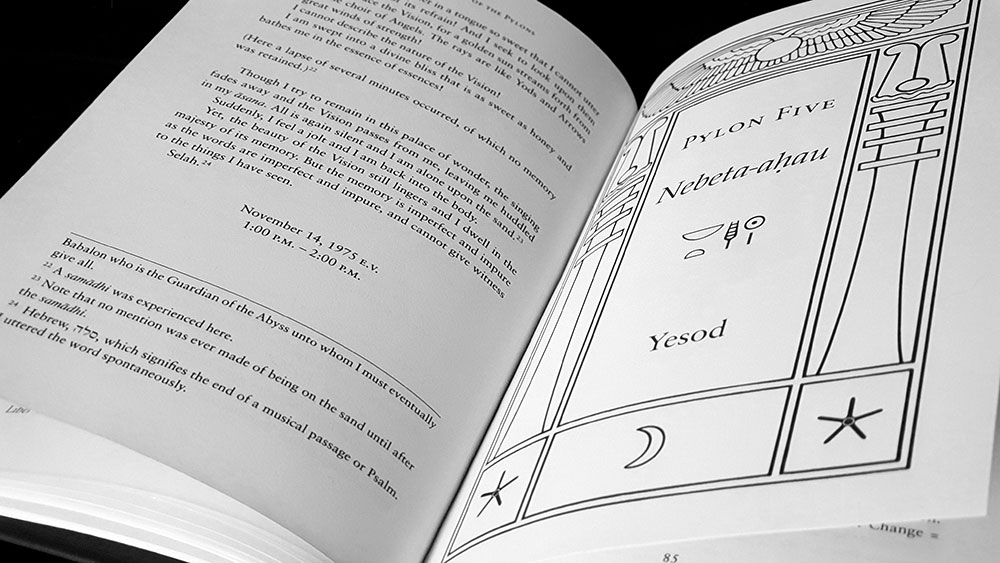 The seventeenth century-style English permeating these visions does become tiresome, with both seer and entities constantly employing its forms, and verily, there doth be a multitude of thous all up in this domicile. This reaches its sublimely ridiculous zenith in the vision of the third pylon where an angel sends your mind reeling by asking the tortuous “knowest thou not that thou art verily the word itself.” Um, sure, whatever you say, guy. This is something which highlights another tendency here, where these astral entities often ask rhetorical questions and unanswered hypophora, as if they themselves are not sure about their own esoteric soup, and are constantly looking for affirmation; yet never pause long enough for an answer. “Hath not the Fire of our Father licked up the offerings upon the stone?” Um, yes, I guess so. “Who hath decreed that the waters should be wormwood to poison the bowels of the sea?” Don’t look at me, it was like that when I got here. “Hath not the head of the Bull been taken to appease the thirst of the Lady of the Sea?” Um *looks sideways*, yeah, absolutely it has. “Hath not the 81 been expanded to the Hawk-headed Lord of Strength and Silence?” Hang on, *checks notes* oh yes, that was mentioned at the last stakeholder’s meeting by Tina from Sales. 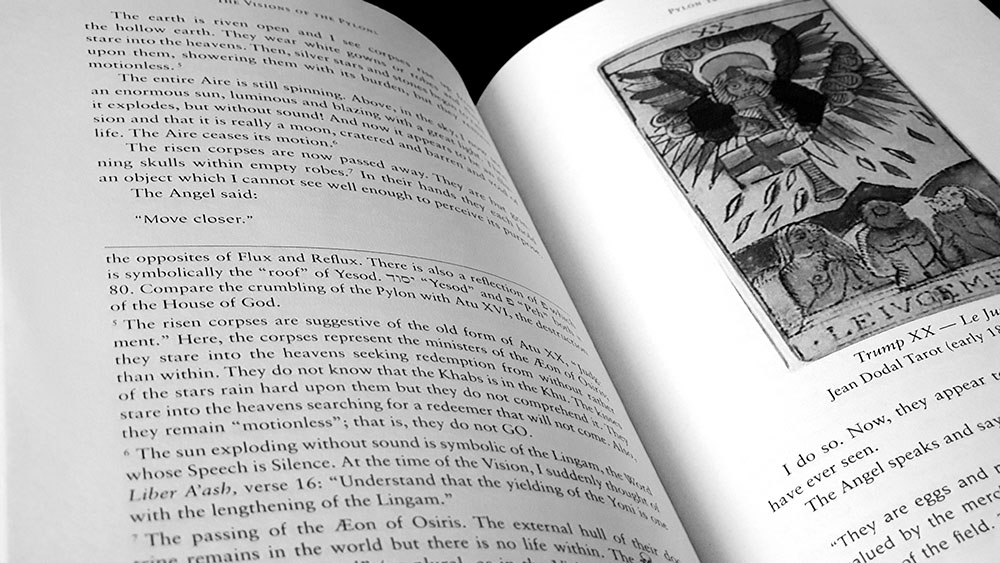 As a record of a very particular kind of magickal journey and its attendant cosmology, Visions of the Pylons, irrespective of the snark, makes for an interesting read. Those expecting a straightforward Egyptian experience reflecting the journey through the underworld as recorded in the original Book of Gates will be disappointed, as that iconography and narrative is largely absent. There’s no solar barque, no explicit sequences of the traveller assuming the various neter god forms, and no direct encounters with the guardian goddesses of each hour. 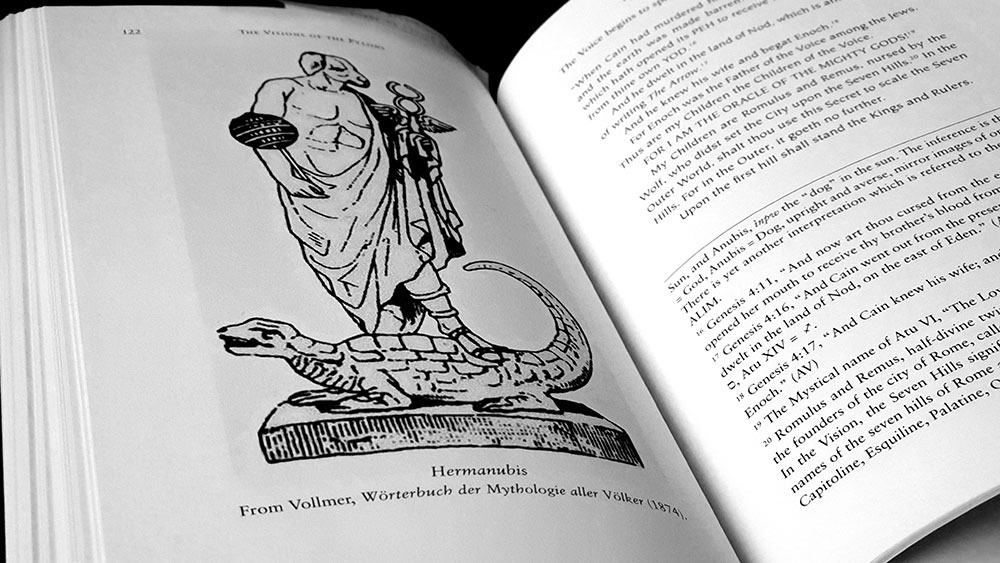 Visions of the Pylons has been released as a hardback bound in blue cloth with the sigil of the A.:.A.:. debossed on the cover. This is wrapped in a dust jacket with cover art by Nancy Wasserman, featuring a depiction of the solar barque in the underworld, based on a scene from the Book of Gates in the tomb of Ramses I, with the sun god standing at the centre of the boat, bull-headed like Khnum, and the serpent Apep in the waters below.

Book design and layout is by James Wasserman’s Studio 31 with body set in a standard roman serif face but with all dialogue rendered in a different, ever-so-slightly condensed, humanist serif. Other than sigils and the like, Visions of the Pylons is peppered with images, used to illustrate the interpretation of vision elements, including a selection of atu from the Thoth deck, and various photos or drawings of god forms. These vary in quality from perfect line drawings of the Egyptian gods, to rather less satisfying illustrations or photographs whose lo-res origins are betrayed by artefacts and jagged or blurry lines. There are also a series of glossy colour plates showing the relationship between the various pylons and the sephiroth, as well as a black and white plate opening the book with a depiction of Gunther as The Magician, created in pen and ink by Australian artist Robert Buratti (secretly commissioned by Giuseppe Zappia).