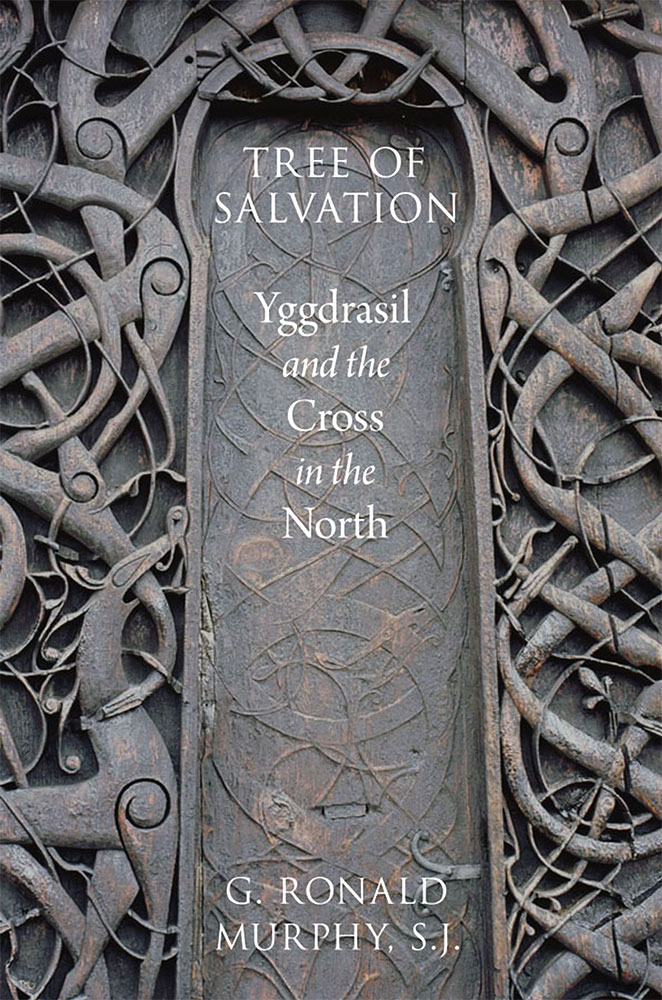 Nearly twenty years in the making, G. Ronald Murphy’s Tree of Salvation is something of a labour of love, a meditation on the intersection between Germanic paganism and Christianity formed by the image of the World Tree Yggdrasil. It is this arboreal intersection that Murphy sees as the thematic building stone that facilitated the integration of Christian thought within the northern European worldview, thereby ensuring conversion. The delicateness of that language does betray Murphy’s approach here, and perhaps his status as a Jesuit priest, for he portrays this transition as largely idyllic, a meeting of the minds rather than a brutal theocratic conquest.

As is made clear by the subtitle Yggdrasil and the Cross of the North, Murphy argues for a happy syncretism of indigenous myth and the new myth of Christianity in which the World Tree was able to be seen as an analogue of the cross and for Woden to be recast as Christ. Murphy’s textual model for this is the recounting of the crucifixion found in The Heliand, in which the cross is described as a tree on a mountain, and Christ is both nailed to the tree and hanging from a rope. Assuming that this idea was something prevalent throughout northern Europe, Murphy turns to his idea of stave and round churches as a mythopoeic text, interpreting them as Christian buildings that were simultaneously representations of Yggdrasil, thereby welcoming in the faithful and reminding them of the World Tree’s sheltering role in myth. Murphy breaks down elements from the architecture that can be seen as analogues of Yggdrasil and its inhabitants: the serpentine gables on the Borgund stave church as the serpents found at the base of Yggdrasil, the tapered shape of the structure mirroring that of a tree, as well as its very materiality. 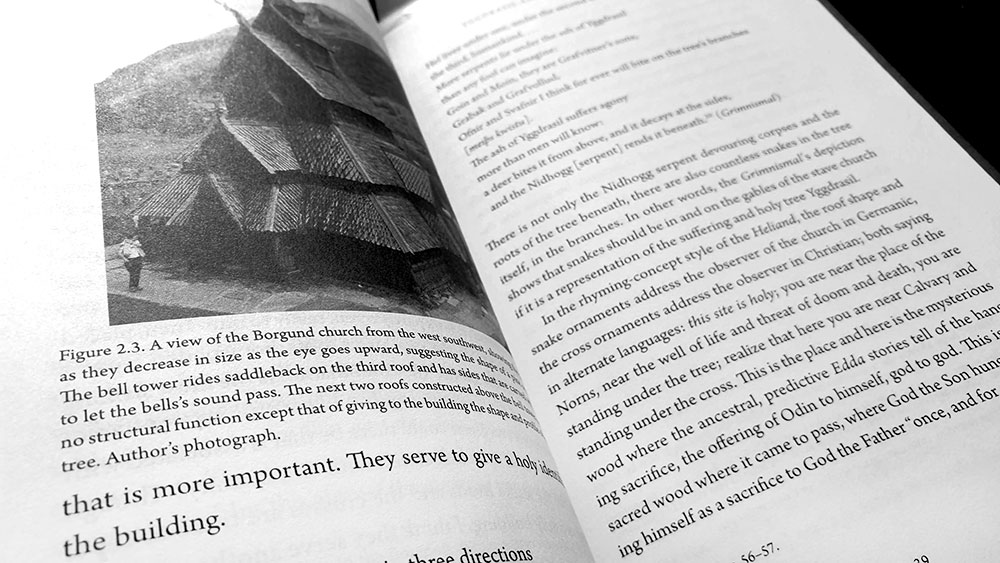 A particularly rich area of imagery for Murphy are the portals and doors of churches, most notably the interwoven frame at Urnes church in Norway that is featured on the book’s cover, and the wrought iron decorations on the door of Roglösa church in Östergötland. The latter, which is usually assumed to show a hunting scene in its top panel and the Garden of Eden or the harrowing of Hell in its bottom, is instead appealingly interpreted as a depiction of Ragnarök, with Surtr appearing as a fiery figure with clawed feet, Þórr fighting the World Serpent, and Níðhöggr crawling towards a version of the World Tree.

There is something very appealing about this idea of pagan imagery being thoroughly suffused into Christian architecture, especially with the way in which Murphy presents it as being so complete and without question, rarely pausing to give caveats or alternative suggestions. His suppositions build one upon the other, sometimes feeling like evidence being made to fit a conclusion, rather than confirming a theory. This is particularly evident in the analysis of the Roglösa church door as a depiction of Ragnarök. While it’s an attractive proposition, Occam’s Razor would suggest that a Christian scene on a Christian door makes more sense, especially when the figure Murphy identifies as Þórr appears almost identical to depictions elsewhere of St. Michael battling the dragon, right down to the figure’s angelic wings. While acknowledging the similarity, Murphy shores up his interpretation by noting that the figure doesn’t carry a spear as St. Michael does in some depictions, seeing instead a small hammer; the tiny, questionable Mjölnir seemingly holding more weight than the wings and posture of an archangel. 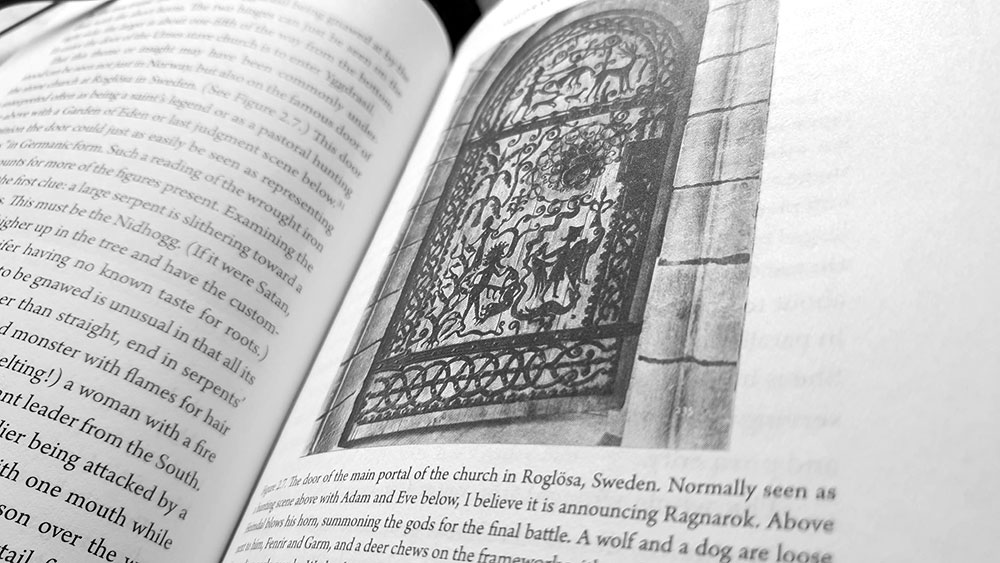 As something of a poetic approach to these themes, Murphy’s argument is an enthusiastic one, and one in which this passion may sometimes get the better of him, inserting intent where there may have been none. He presupposes, for example, that the idea of Yggdrasil and the interpretation he applies to it was universally held by all tiers of Germanic society, and that this degree of reverence made going to a Yggdrasil-shaped church a tick in the plus column for adopting Christianity. The apex of this is when he puts himself in twelfth century Danish round churches, imagining what a Christmas liturgy would have been like in Nykirke or how Mass would have been conducted in Østerlarskirke. These are fanciful recreations more akin to guided visualisations in which the architecture and the sermon intertwine, as does the imagery both pagan and Christian, with Murphy imagining Yggdrasil being at the forefront of everyone’s mind, acting as a portal that the faithful consciously pass through in order to receive the body and blood of Christ.

In the penultimate chapter Yggdrasil and the Sequence of the Runes in the Elder Futhark, Murphy changes direction somewhat and explores the idea that the runes themselves encode these Christo-Pagan themes of Yggdrasil, with the order of the futhark and the very names of the runes acting as an intentional cypher. To open, he discusses Walter W. Skeats unconvincing nineteenth century attempt to interpret the runes in such a manner, wherein he tried to squeeze the opening words of the Paternoster out of the runes fehu, uruz, thurisaz and ansuz (Father, ure, þhu in heofon). While acknowledging the limitations of Skeats’ approach (no equivalent of ‘h’ in the place it’s needed for heofon just for starters), Murphy has his own go at it, trying to do much the same in increasingly convoluted justifications that come across like the very worst of clutching-at-straws conspiracy literature or alternative archaeology cryptography. First he presents a problem where there isn’t necessarily one, asking why the futhark should follow a different order from the Greco-Roman alphabet. Having done so, he then attempts to answer it. In trying to establish a justification for the futhark’s order he turns to its first aett and manages to somehow get ‘and Christ are one,’ from the runes kaunaz, gyfu, wunjo, hagalaz and nauthiz. Where’s that Surprise Jesus™ in all this you ask? Well, gyfu and wunjo, which sit next to each other in the aett, kind of look like the chi ro symbol (that is, if you lay them one atop the other, move the wunjo up a bit and squint), and that’s obviously Christ, just sitting there clear as day, waving enthusiastically. However, the other runes in that aett aren’t also the separated components of any christogram, no, instead the hagalaz and nauthiz must combine to form the vowelless hn which could be, well of course, a Greek word, hen, the neuter form of eis meaning ‘one.’ Meanwhile, the solo ‘k’ of kaunaz “can only be,” as Murphy emphatically states it, an abbreviation for another Greek word, kai, meaning ‘and.’ Following on from these tortuous beginnings, Murphy somehow manages to convince himself that he can get ‘father’ too, though this isn’t by extrapolating abbreviations from a few individual runes or combining them into a monogram, no, the rules are once again different here, and now the first five runes of the futhark are run together to form fuþar, a word that doesn’t mean anything in any language but sure sounds kind of maybe like ‘father,’ if you squint. The whole segment now reads ‘The father and Christ are one.’ Neat, eh? Personally, I prefer to interpret the hn of hagalaz and nauthiz not as the Greek hen but as the Middle English hen (from the Old English henn, and then the Proto-Germanic *hanj?.), making the phrase now read ‘The father and Christ are chicken.’ 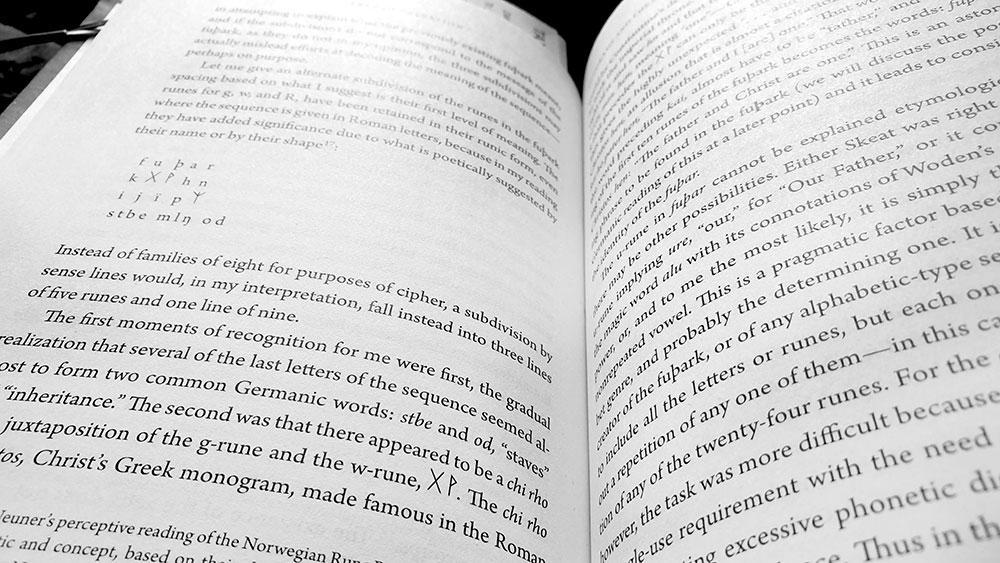 Facetiousness aside, this is a remarkable exercise in intellectually dishonest apophenia, in which at least three different methods are used to try and wrangle a Greek phrase out of the letters of a Germanic script, where any method and its interpretation are accepted as long as it fits the pattern one is trying to establish. One tenuous connection is made, followed by another, cascading in a wave of cryptographic confirmation bias, all enthusiastically recounted by Murphy who details his giddy excitement following each ever more conclusive discovery. Small wonder that Murphy goes some way to redeeming Skeats at the end of this chapter, calling him “in a sense prescient.” Never once does Murphy countenance that it would be possible to take the letters of the futhark’s first aett and come up with a hundred different meanings if you could call upon any language, any collection of symbols and any non-existent homophones that kind of sound like the words you want them to sound like. Let’s see, ‘f’ and ‘u’ are used as an abbreviation of the profane directive “fuck you,” and þa sounds like ‘the,’ and well, ‘rk’ must be missing a vowel, shall we say ‘o,’ so that means fuþark actually means “Fuck you, the Rock.” Clearly the ancient runemaster was no fan of Dwayne Johnson.

As he does elsewhere, Murphy strays from methods scholarly and imagines what this specifically gendered creator of the order of the futhark might have intended to do with his tortuous ordering of the letters. Revealing the tangled web he has woven, Murphy makes his mythic futhark organiser someone with multiple motivations, being a pagan Swedish runemaster, a polyglot who was also handy with Greek, someone possessed of a favourable experience with and impression of Christianity who was trying to make the runes suitable to serve this new imported master instead of Woden. In so doing, he created a synthesis of the pagan god and Christ, making the latter the possessor of the runes with which his name was encoded. Yet, Murphy must find an excuse for the recherché and frankly indecipherable nature of this Christo-Pagan runemaster’s runic encoding, suggesting that he kept it secret for some reason, either for reasons magical, or as effectively an occult blind, or because perhaps not everyone, be they Christian or pagan, shared his views. Somehow, despite this caginess, this secret squirrel ordering of the futhark was still disseminated across Scandinavia, stretching credulity. 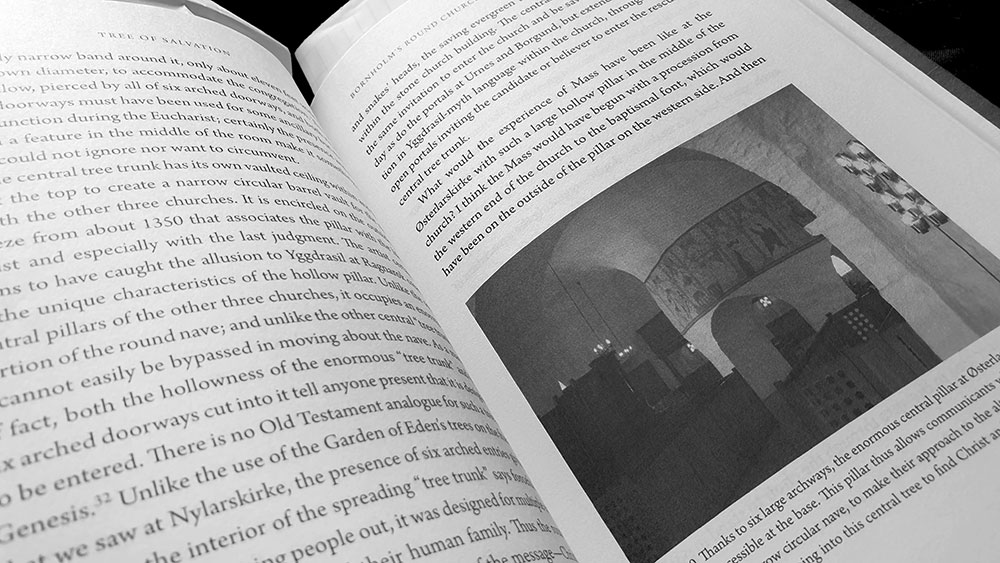 Murphy’s final chapter explores the idea of the presence of Yggdrasil in the evergreen imagery of Christmas, trying to find a happy medium betwixt those who see the Christmas tree as a pagan symbol and those that see it as an entirely Christian invention. It’s not just the tree he deals with here, indeed there is considerably more time spent with other arboreal elements associated with Christmas, and he interprets the wreath, for example, as a solar wheel symbolling the cycle of the life that begins anew at Christmas. As elsewhere, what Murphy presents is often just speculation, poetically rendered so as the sound plausible, even convincing, but with little questioning of the mechanisms that would have allowed such themes to perpetuate down through the centuries. This is particularly evident when he addresses the comparatively late seventeenth century innovation of lights on the Christmas tree, interpreting them as stars and finding a tenuous precedent in Snorri’s thirteenth century description in Gylfaginning of the branches of Yggdrasil stretching far across the sky.

In sum, what Murphy presents here is an interesting series of intersecting ideas and themes, ones which if treated as unconscious simulacra add richness to interpretations of both Christian and pagan symbolism. Where it is less successful, though, is when it imagines intent and purpose, relying entirely on presuppositions and impressions in a tone that does come across more like a conspiracy theorist or alternative historian searching in Rosslyn Chapel for Templar traces or forgotten bloodlines.