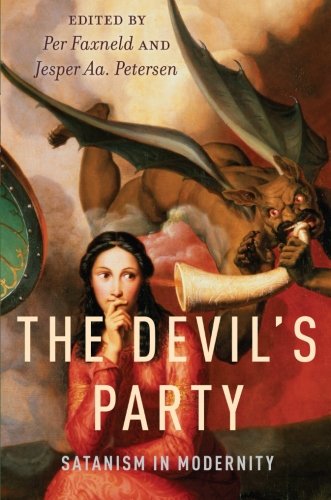 This collection of writing about modern Satanism features some of the familiar names from Scandinavian esoteric academia (Kennet Granholm and editors Faxneld and Petersen), along with other contributors: Asbjørn Dyrendal, Eugene V. Gallagher, Fredrik Gregorius, Mikael Häll, Amina Lap, James R. Lewis, Ruben van Luijk, Jacob Senholt and Rafal Smoczynski. The brief sits rather comfortably with the nature of Faxneld and Granholm’s other writing, casting an academic gaze on a subject one assumes they have quite the personal interest in.

This is a four-part party of devils, divided broadly into segments that are pre-LaVey, LaVey, post-LaVey and, I guess, post-post-LaVey. That isn’t to say that entirely everything revolves around the bad doctor, just that in a discussion of modern Satanism, it’s impossible not to frame it without reference to his rather high profile ventures. It is, though, the areas with little or no connection to Anton LaVey that provide the most interest, particularly the three entries that make up the first section of precursors and currents. In these, three distinctive examples of early modern diabolism are considered: Mikael Häll explores ideas around Satanism and devilish sympathies in early modern Sweden, particularly at the verdant intersection between Christianity, folk belief and witchcraft. He highlights confessions in which a rather idiosyncratic belief system had developed in which God was believed to be caught in Hell, making the Devil a better object of devotion. Ruben van Luijk’s attention focuses all too briefly on the retroactively named Romantic Satanists of the nineteenth century, those writers and artists who, taking their cue from Milton, identified Satan as a sympathetic adversarial anti-hero who epitomised the character of the modern age: sex, science and liberty. Also in a literary vein is Per Faxneld’s thorough assessment of Stanislaw Przybyszewski, the Polish Symbolist writer who, Faxneld argues, can be considered the first person to ever formulate a coherent system of Satanic thought.

In the second section of The Devil’s Party, the attention turns to Anton LaVey and several authors take a microscopic approach to the so-called Black Pope, casting a magnifying glass over various sections on his writing and philosophy. Amina Lap’s Categorizing Modern Satanism places LaVey’s brand of Satanism within the milieu of the emerging New Age and positions it as comparable to the Human Potential Movement and thus an example of the self-spirituality so in vogue at the time. With LaVey’s more misanthropic tendencies predicating Ayn Rand and Ragnar Redbeard over Abraham Maslow, it’s hard not to think of LaVeyan Satanism, with all its self-serving human potential given flight, as The Secret, With Horns. In Sources, Sects, and Scripture, Eugene Gallagher analyses The Book of Satan from LaVey’s Satanic Bible, in particular the elements one could charitably say were ‘borrowed’ from Ragnar Redbeard’s social Darwinist rant Might is Right. Gallagher diverges in opinion from people such as Michael Aquino and Chris Matthews who have seen LaVey’s borrowing as mere plagiarism, and instead tries to present it as an act of savvy editing, casting LaVey as more remixing trickster than content-starved huckster. Suffice to say, this assessment doesn’t convince and the meticulously documented changes that LaVey made do not come across as the significant acts of redaction criticism the author would have us believe they are. Asbjørn Dyrendal concludes this purgatory in the mind of LaVey with Hidden Persuaders and Invisible Wars, a consideration of the strange intersections LaVey had with conspiracy thinking: on the one hand mocking the mindset that abandoned control to the machinations of an imagined Kennedy-killing invisible hand, but at the same time, paranoically railing against forces of conformity whether they be church, state or television commercials.

The book’s third section, The Legacy of Dr. LaVey: The Satanic Mileu Today, brings together three disparate pieces, connected only through their rather dry survey/data analysis approach. James R. Lewis turns to statistics from his own Satanism Surveys to look at how Satanists identify themselves in terms of conversion narratives, assessing the ‘coming home’ claim, common to both Satanism and Paganism, in which practitioners are born, not made. Jesper Petersen takes a different anthropological approach, considering the spirit of transgression (and in turn, sanitisation) in modern Satanism, while Rafal Smoxzynski summarises the discursive strategies of Polish rationalist Satanists associated with the satan.pl website.

Finally, in the fourth section, matters move out of the gravitationally heavy orbit of LaVey with a consideration of Satanism in a post-LaVeyan world. Kennet Granholm initiates this with a discussion of the problematic and limited nature of the term ‘Satanism,’ especially when it comes to dealing with paths that aren’t nominally Satanic, but share a similar ethos or even occupy the same subcultural space. Granholm uses the Temple of Set as a perfect example of this quandary, being similar to the Church of Satan in so many ways, and often referred to as a Satanic organisation, even though their very name is used to differentiate themselves from Aquino’s previous affiliation. This is not a new area of thought for Granholm who expressed his dissatisfaction with the analytical usefulness of the term ‘Satanism’ as early as 2001, and in its place he proffers Left-Hand Path as a more appropriate category; one that is able to embrace various darkly-orientated paths rather than just those who have Satan at their thematic core. While Granholm’s semantic concerns are certainly interesting, his piece is more enjoyable for the condensed history and summary of the Temple of Set. It is by no means exhaustive, but as a potted history of the temple, it is quite delightful. The same can also be said for some of the other essays in this final section, all of which focus on groups or traditions at the periphery of the Church of Satan. Fredrik Gregorius’ Luciferian Witchcraft summarises this particular brand of witchcraft, prefacing it with Charles Leland’s Aradia material before moving on to brief considerations of the usual suspects: Paul Huson, Robert Cochrane and the Clan of Tubal-Cain (including its various descendants in the United Kingdom and the United States), Andrew Chumbley and the Sabbatic Craft, Michael Howard, and less usual, Michael Ford (but not the comparable Robin Artisson). For anyone familiar with the subject of Traditional Witchcraft, there won’t be anything new here, but as a brief primer, it’s fine. Jacob Senholt concludes this section, and the whole book, with Secret Identities in the Sinister Tradition, an overview of the Order of Nine Angles with a particular focus on the identification of the order’s leader Anton Long as David Myatt. Senholt suggests that Myatt’s forays into various fringe areas of politics and activism, in particular his conversion to Islam for several years, are examples of what the ONA call insight roles, with everything he has done being part of an ongoing Satanic imperative (rather than simply vacillations between various extreme causes).

In total, The Devil’s Party succeeds with its variety of voices casting a fairly broad thematic net. Although to continue this slightly mixed metaphor, there are areas where the netting does become tangled and the considerations of LaVey’s thoughts can be a slog to get through; not because of the quality of the writing but because of the way his dated, rationalist approach took all the fun out of Satanism. There are gaps that one would have liked to have seen filled in a look at Satanism in modernity. For example, it would have been interesting to have seen a consideration of Satanism and black metal (particularly because of the way the often theistic Satanism of black metal was positioned in opposition to LaVeyan Satanism). Similarly, a survey of LaVeyan Satanism since the death of LaVey would have been interesting, with total references to Peter Gilmour being, to put it mildly, slight. The quality of writing is high, formatting is clean, clear and functional.