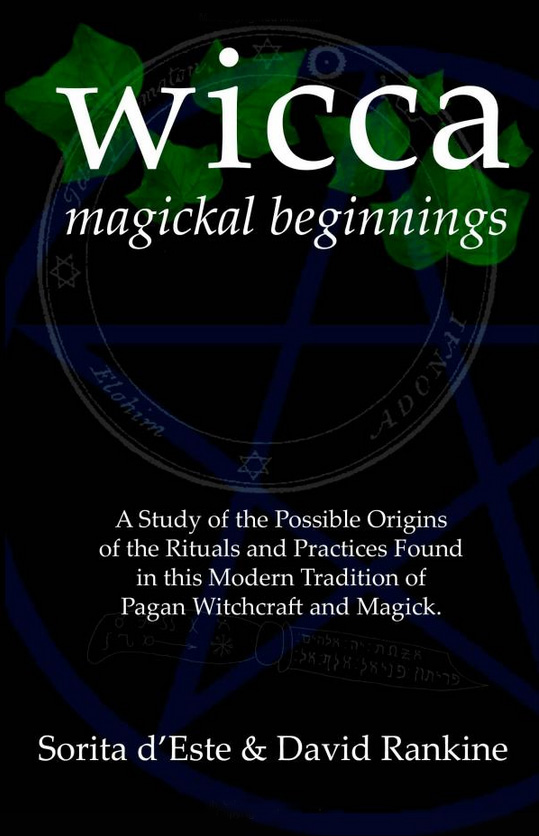 As they so often do, Sorita d’Este and David Rankine start things off with a title that seems to be lacking punctuation: maybe a colon or hyphen after the Wicca, or a possessive apostrophe and an S, even, mayhaps, a comma after the Wicca; anything to stop that strange running on feeling. We probably shouldn’t dwell on it, but every time I look at the bookcase, there it is, staring at me, along with its similarly punctuation-deficient twin sister Hekate Liminal Rites.

Despite its lack of titular punctuation, this book could be described as the geekiest book about witchcraft ever. If geek is defined as an obsessive interest in a subject and its minutiae, well, then, none so geek as this. d’Este and David Rankine subtitle this book “a study of the possible origins of the rituals and practice found in this modern tradition of pagan witchcraft and magick,” and this rather archaic and academic sounding description sums up their modus operandi of taking a microscopic look at the elements of Gardnerian witchcraft and seeing where old man Gardner got them from.

Gardner’s use of existing material to construct his form of witchcraft is hardly a revelation but this book shows how thoroughly he borrowed, magpie-like, from grimoire tradition in particular for many of the props and procedures of Wicca’s ritual system. The casting of the magick circle in Wicca shares many similarities with the procedure in the Key of Solomon, while the design of the circle itself is broken down by d’Este and Rankine and its parts traced to other grimoires (often with elements transposed or mistranscribed). The same is true of the ritual athame whose roots can be found in the Grimoire of Honorious and the Key of Solomon, with Gardener’s sourcing being revealed by the copying of changes made in specific editions (in this case, the 1989 Mathers edition). This is where d’Este and Rankine’s thoroughness is at its most evident, because they provide a survey of the sigils on the athame in both grimoire and Wiccan sources, including a chart that lists the somewhat dubious Wiccan interpretation of these alchemical and astrological symbols.

d’Este and Rankine also show the debt that Gardner owed to Aleister Crowley, particularly in the creation of Wiccan liturgy. The Lift up the Veil charge draws a little material from the Book of the Law but an even larger amount comes from Crowley’s Law of Liberty. The later Charge of the Goddess is similarly indebted to Crowley, but is shown to also been a potpourri of literary influences, with elements cribbed from classical texts as well as the work of Charles Leland.

In their summing up, d’Este and Rankine present five possible conclusions: that Wicca is a continuation of the grimoire tradition; that it is a continuation of a Victorian ceremonial magick system; that the system was simply created by Gardner and his associates; that it is a genuine survival of a British folk magick system; or that it is the final form of a witchcraft tradition that has its roots in classical Greece and Rome. Given the preceding evidence in the book, it seems overly generous to proffer some of these conclusions, and of course, not all of them are necessarily mutually exclusive, with the answer seeming to be a combination of the first three: bits of grimoire and ceremonial magick cobbled together by Gardner and Co. d’Este and Rankine came down in favour of the first theory, and let Gardner off the hook a little by not playing up any malice or obvious deceit in inventing the system.

d’Este and Rankine’s book is geekily thorough: texts are analysed line by line, and sources are meticulously sourced and compared. This makes for a book that is indispensable for an understanding of the minutiae of Wicca, especially given the influence that it has had on contemporary witchcraft and paganism. In some ways, this book makes you grateful; grateful that d’Este and Rankine have gone into all this depth so you don’t have to.