Subtitled a Practical Grimoire of Qliphothic Sorcery, this book is a succinct journey through the qlipha by Edgar Kerval, aided and abetted by contributions from familiar faces like Asenath Mason, Hagen von Tulien, and Sean Woodward. Mason provides an extensive introduction to the concept of the Qliphoth, while von Tulien and Woodward lend their illustrative talents. S. Ben Qayin is also on hand to add his skills as the editor of the text.

Kerval writes that the journey he presents here is the culmination of four years of magickal work with the Qliphoth. As part of this experience, he encountered various phenomena that give their names to the title of this book. Ast Ma Ion was a vast region full of labyrinths that appear to act as zones of power and gateways through which access can be granted to qliphothic vibrations. Eos Tar Nixet, on the other hand, is the name of a toad-shaped seal, which, when broken, creates a connection between the practitioner’s subconscious and the hole of the Void, creating a secret pathway to the Qliphoth that is different to accessing them through the non-sphere of Daath. What that means in terms of the techniques presented in this book is unclear, as the procedures don’t seem to make many references to Ast Ma Ion and Eos Tar Nixet in their instructions for each qlipha.

The rest of the book is devoted to the qlipha themselves, with each one prefaced with paintings by Sean Woodward and a seal by Hagen von Tulien. Within the book itself, Woodward’s paintings are rendered in black and white, but they are repeated in full colour in an accompanying series of separate cards, making them a good option for those wishing to use his images as points of focus. Following an explanation of each qlipha and ritual instructions, each section then concludes with a sigil for the respective qlipha, this time created by Kerval himself in his trademark spindly and mirrored style that carries with it echoes of the vévés found in vodou. 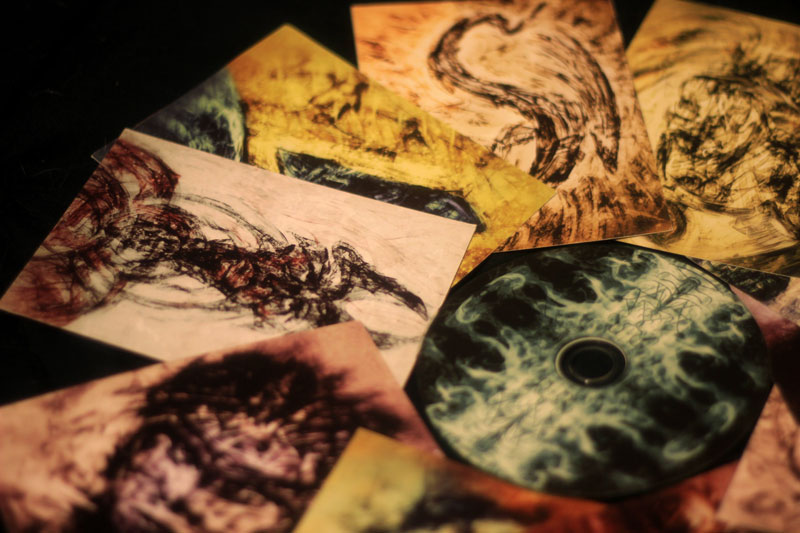 For anyone familiar with the Qliphoth, the descriptions of each qlipha won’t present anything too new or unfamiliar. Each has its characteristics described, a little exegesis on its nature and correspondences, before leading on to a practical exercise for working with that sphere. These exercises differ for each of the qlipha, without too much of a formulaic template of “cast this sigil, says these words, hope stuff happens, rinse and repeat nine more times.” Instead, for example, the exercise for A’rab Zaraq employs two black mirrors that create a nexus within which the spirit of the qlipha manifests; Golachab’s ritual incorporates autoerotic techniques, while the ritual for Ghagiel involves walking a spiral pattern.

The section for the final qlipha, Thaumiel, adds an additional layer of complexity, introducing the idea of seven vibrational shadows known as the masks of Thaumiel. Each of these masks is represented by a vévé-style sigil and a short poem summarising their attributes. As with elsewhere throughout this book, going through these poems feels a little like you’re reading song titles from Kerval’s ritual ambient project Emme Ya. There’s a profusion of words from his idiosyncratic lexicon, with much talk of primigenia, primal atavisms, and quintessences.

Despite coming in at 114 pages, Ast Ma Ion – Eos Tar Nixet is a quick read due to the rather large point size of the body type and the healthy population of sigils and other full page illustrations. Ast Ma Ion – Eos Tar Nixet has been bound by Kerval himself, an intimidating task to be sure, and it comes in faux leather, with cover sigil and spine text in silver, and black end papers. It holds together well, almost too well, as the tight binding and the conservative size of the gutters (with no allowance given for creep) means that the pages never open as fully as one would like; and holding a spread open long enough to read both pages can lead to finger fatigue.

Accompanying this release is a CD of music by Emme Ya called Qliphothic Emanations, a suite of six tracks intended to be an accompaniment to the nightside journey outlined in the book. These pieces are to the usual high standard of Emme Ya, with a track called Ast Ma Ion – Eos Tar Nixet being particularly evocative; and with its lovely Andean pan pipes coming across as a remarkably fresh sound in the world of ritual ambient. 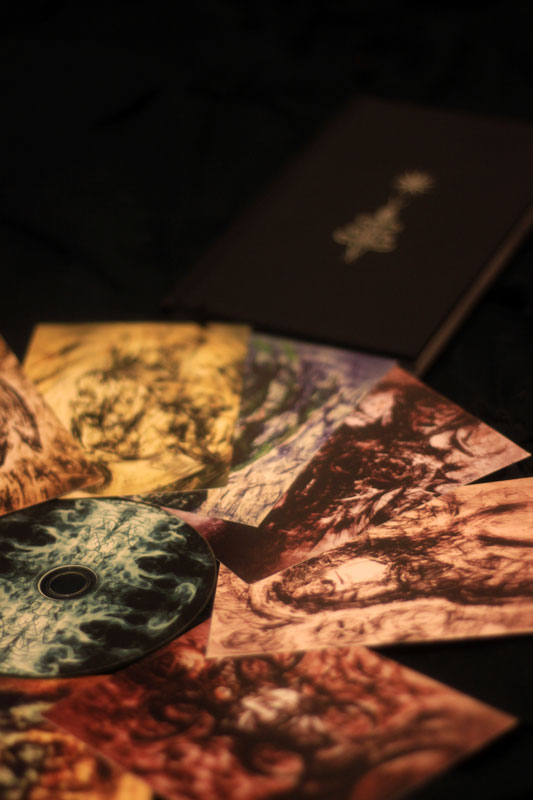 Ast Ma Ion – Eos Tar has been released in two editions, the standard Sinister Flame edition of 100 copies, and the deluxe Primal Shadow edition of just 11 long-sold-out copies, which comes in a cloth and calfskin traycase.