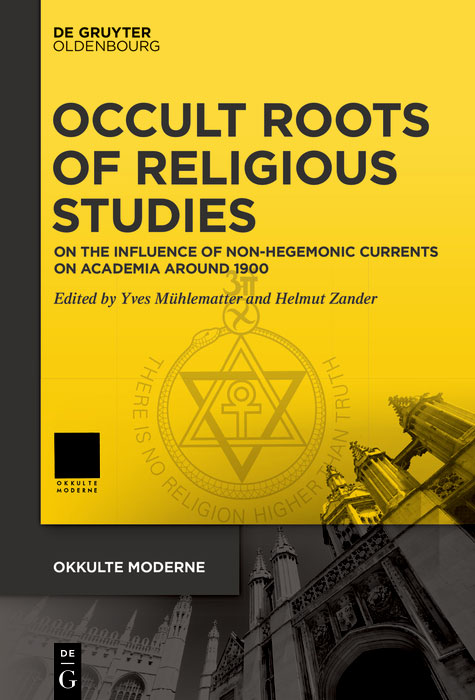 Grandly subtitled On the Influence of Non-Hegemonic Currents on Academia Around 1900, this anthology focuses on the interconnections between religious studies and occultism, advancing the thesis that the academic discipline of religious studies has hitherto unexplored, and literally and purposefully occulted, roots in esoteric traditions and the occult. As such, occultism and esotericism provided a fertile ground for the development of academic interests in comparative religion, with several scholars of the occult being directly and indirectly involved in the emerging field. The exploration of this scholarly evolution takes the form of case studies of figures such as Paul Masson-Oursel, John Woodroffe, Nees von Esenbeck, Walter Y. Evans-Wentz, Walter Andrae and others. In addition, this volume concludes with what are described as ‘short biographies’ of various contributors to religious studies whose interest in both occultism and science have been little explored, revealing how esotericism, despite its othered status, can be an intrinsic part of the hegemonic culture to which it otherwise appears to be a contrary counterpart.

The case studies in Occult Roots of Religious Studies compile papers presented at the 2018 conference The Birth of the Science of Religion: Out of the Spirit of Occultism, hosted by the Université de Fribourg, and featuring Marco Frenschkowski, Daniel Cyranka, Boaz Huss, Julian Strube, Jens Schlieter, Léo Bernard, Sabine Böhme, and Dilek Sarmis. Editors Yves Mühlematter and Helmut Zander open the proceedings here with a joint introduction that presents the central thesis. Zander follows this with a contribution of his own, less of a case study and rather a setting out of terms in answer to the titular trinity of questions: what is esotericism? Does it exist? How can it be understood? As an academic setting of terms and definitions, this is all fine and de rigueur, but one finds oneself itching to skip the grounding and get to the case studies. Also offering something of an overview is Marco Frenschkowski’s The Science of Religion, Folklore Studies, and the Occult Field in Great Britain (1870–1914), in which he documents how the emerging field of religious studies in late 19th century Britain both influenced and competed with occult and esoteric groups who were pursuing similar but one might say, more invested, avenues of investigations. Despite being an abridged version of a longer study, Frenschkowski’s contribution feels relatively exhaustive, providing a context that extends beyond the geographical boundaries of the Great Britain of the title. 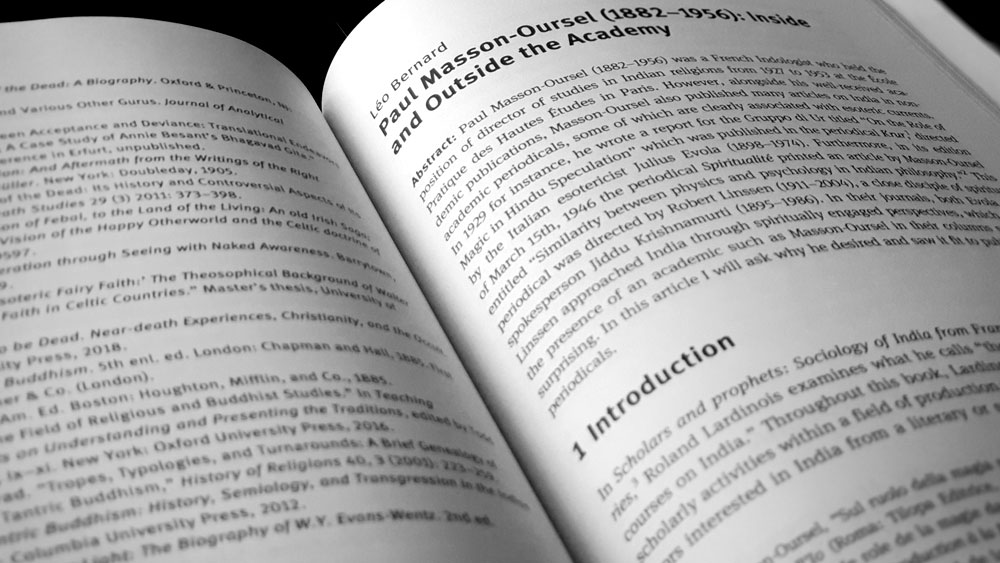 The first case study of an individual is Daniel Cyranka’s Magnetism, Spiritualism, and the Academy in which he considers perhaps the oldest figure to be profiled here: the German botanist Christian Gottfried Daniel Nees von Esenbeck, president of the famed German Academy of the Natural Sciences Leopoldina from 1818 to 1858. As the title suggests, Cyranka is not concerned here with just Nees’ involvement in matters of the academy but with his interest in the then emergent trends of magnetism/vitalism and spiritualism, two fringe belief systems that, to varying degrees, embraced a scientific veneer. Cyranka’s archly disagrees with Johanna Bohley’s 2003 biography of Nees, in which she interprets his involvement with spiritualism as ’senile mysticism,’ painting him as someone for whom ‘infirmity’ and decrepitude made him descend into the comforting murk of pseudo-science. Cyranka contradicts this image, showing how there was a continuum between his academic works and later interests, and that his attempts to align the otherworldly with the scientific were hardly unique, being indicative of similar conversations occurring at the time.

In Academic Study of Kabbalah and Occultist Kabbalah, Boaz Huss profiles several 19th and 20th century scholars of Kabbalah including Gershom Scholem, Adolphe Franck, Moses Gaster, Joshua Abelson, and Ernst Müller. Although such scholars of Kabbalah, and Scholem in particular, were dismissive of occult Kabbalah because of its practitioners’ lack of academic expertise, and its independence from a specifically Jewish framework, Huss argues that the relationship betwixt the two fields was more nuanced than one might expect. He notes that Kabbalah scholarship and experiential Kabbalah have common genealogies, with significant connections, shared ideas, and nomenclature, and with the scholarly side of the aisle going so far as to identify Kabbalah as a form of theosophy (with the lowercase ‘t’). Scholem was even appreciative of Arthur E. Waite and Joseph Franz Molitor (both Christian kabbalists rather than occult ones) and the insights they provided, commending Waite for his appreciation of kabbalah’s sexual symbolism. 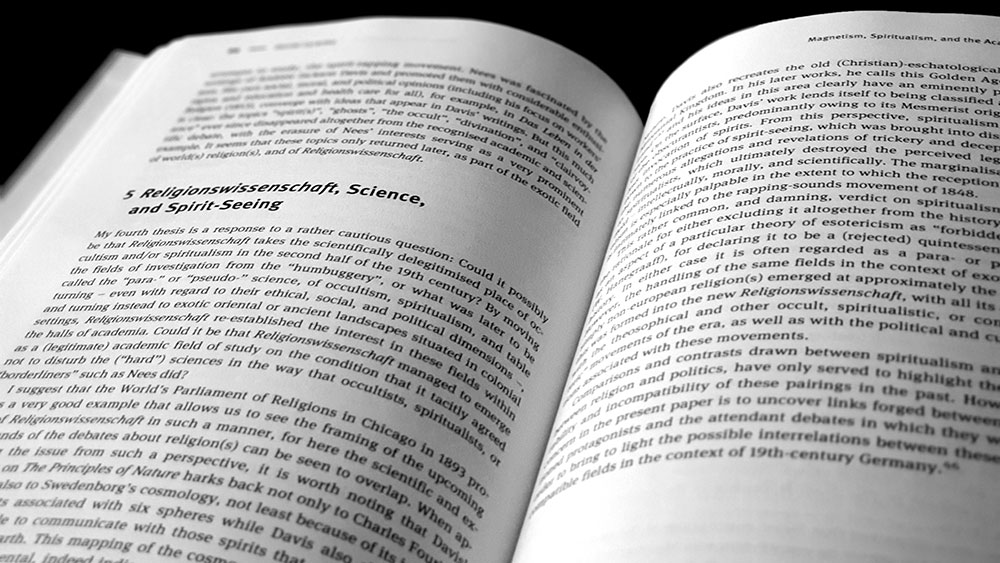 This volume’s sole illustrated essay is Sabine Böhme’s The Ancient Processional Street of Babylon at the Pergamonmuseum Berlin, with its focus on the Anthroposophical background to Walter Andrae’s reconstruction in Berlin’s Pergamon Musuem of the Ishtar Gate and other archaeological objects from the same region, creating what is known as the museum’s Processional Way of Babylon exhibition. Böhme emphasises Andrae’s membership of Die Christengemeinschaft (The Christian Community), an esoteric denomination influenced by the works of Rudolf Steiner, though not directly affiliated with him, arguing that the community provided Andrae with an understanding of Steiner’s system of Anthroposophy and that this influenced the design of his museal concept. Assigning ancient intent to an apparently theoretical master architect called Zaratos or Nazarthos, Andrae conceived of the processional way as a device to purify those who walked down it as they headed into the Holy City of Bab-ilu, with the various stelae of lions, bulls and the chimerical mushhushshu dragons that lined the way creating a metaphysical experience for them. In such animal figures, and in the sphinxes he imagined standing guard at the beginning of the journey (going so far as to include two sphinxes from a different area and time period at the start of the museum’s processional way, one a restoration and the other a replica of it), Andrae saw a depiction of Steiner’s idea of humans being comprised of four parts: a physical body, a life body or etheric body, an astral body bearing sentience or consciousness, and the ego. Böhme’s illustration of how Anthroposophical ideas informed Andrae’s thinking is convincing, drawing principally from his own writings, while said thinking is rather less so, coming across as supremely speculative and prejudicial, with preconceptions colouring the archaeological interpretations. 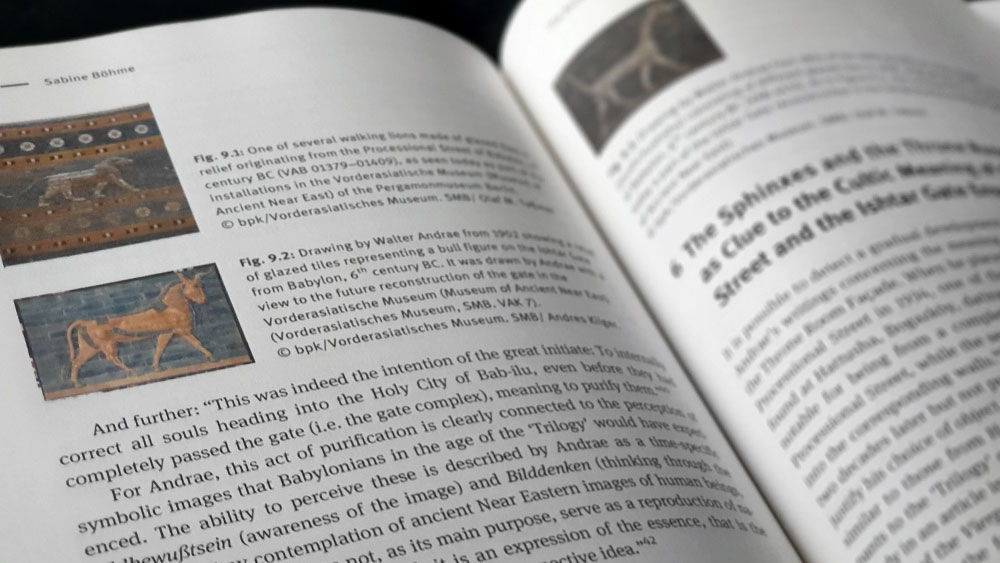 Three of the entries here concern themselves with the intersection of the West with Indian and Buddhist ideas, beginning with Julian Strube’s Tantra as Experimental Science in the Works of John Woodroffe. This provides a welcomed profile on the English author, perhaps better known by his pseudonym Arthur Avalon, whose comprehensive works on Tantra and Yoga first introduced those ideas to many in the West. Strube shows how Woodroffe’s advocacy for Tantra as an empirical, rational and ultimately scientific form of mysticism had an enduring and substantial influence on figures such as Mircea Eliade and Carl Gustav Jung, amongst others, with the system being considered analogous to the emerging Western fields of spiritualism and occultism.

A broadly similar vein is mined in Jen Schlieter’s A Common Core of Theosophy in Celtic Myth, Yoga, and Tibetan Buddhism, but with the focus on the American Theosophist Walter Y. Evans-Wentz, who, like Woodroffe with whom he communicated, was a Westerner who directly engaged with indigenous experts and intellectuals; including the Indo-Tibetan scholar and translator, Lama Kazi-Dawa Samdup with whom he collaborated on three titles, the most famous of which is the first English translation of the Bardo Thodol. Schlieter does not solely focus on Evans-Wentz’s relationship with Tibetan Buddhism, rather contextualising it within a Theosophy-inspired embrace of all religions and spiritualties that saw him study Celtic mythology, search for Egyptian wisdom, and only later explore Yoga and Tibetan Buddhism. Highlighting the book’s concern with comparative religion, Evans-Wentz saw themes of animism and reincarnation in all of these religions, as well as in the beliefs of certain Alexandrian Christians and Gnostic sects, arguing that they were fundamental principles of a perennial spirituality.

As the final part of this similarly-themed trio, Léo Bernard’s profile of the orientalist and philosopher, Paul Masson-Oursel, subtitled Inside and Outside the Academy, charts his oscillation between hegemonic and non-hegemonic poles, as exemplified by René Guénon’s scathing assessment of him as exhibiting a tendency towards appeasing everyone, “a result, no doubt, of his quite indecisive character.” Understandably, Bernard is nowhere near as a vituperative in his consideration of Masson-Oursel, highlighting his role in developing an academic approach to comparative religion in which the idea of philosophia perrenis played a central role, as well as showing his links to the growth of Neo-Vedanta/Neo-Hinduism in which Hindu thinkers and reformers such as Vivek?nanda and G?ndh? redefined Hindu dharma as an essentially universal, ethical religion. 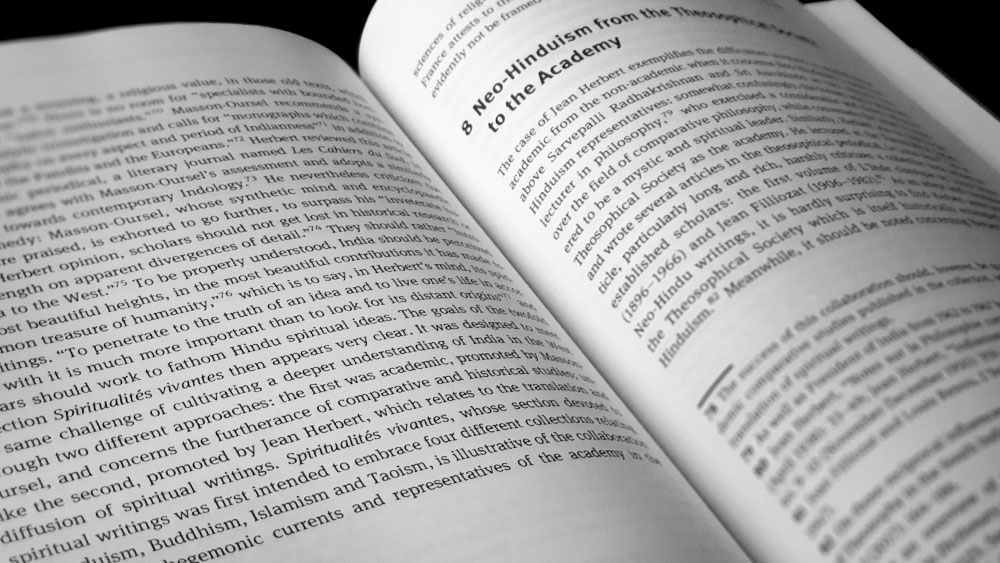 Occult Roots of Religious Studies runs to 283 pages of main content, bound as a sturdy hardback. The text in is presented in the De Gruyter house style, with the body set in a mild slab serif that almost scans as a sans serif, giving a distinctly modern look that, as has been mentioned in other reviews, is ever-so-slightly unconducive to reading. Images in Böhme’s consideration of Walter Andrae are reproduced at a small size and with their captions are somewhat awkwardly formatted.