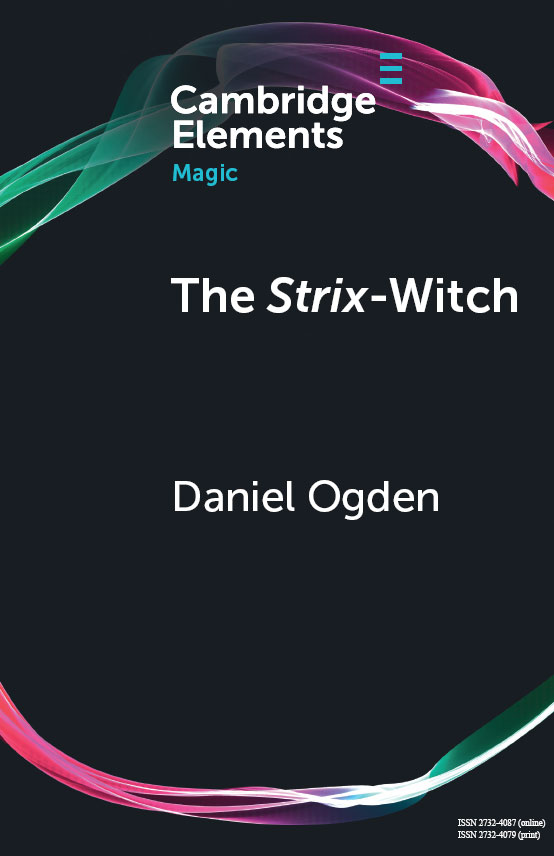 Another entry in Cambridge University Press’ compact Elements in Magic series, Daniel Ogden’s The Strix-Witch seeks to provide the tricky answer to what is acknowledged as an ostensibly simple question: what was a strix? The simple answer is a winged and often predatory female figure of Greek and Latin folklore, travelling at night in either a birdlike physical form or as a projected soul. But as Ogden shows, the strix is a being of shifting classifications whose liminal status as a creature of simultaneous substance and ephemerality makes her difficult to grasp and define.

Ogden begins with a brief consideration of the Latin term itself before providing a survey of the three most substantial accounts of the strix, as found in the works of the poet Ovid, the satirist Gaius Petronius, and from a Christian perspective, the seventh century Byzantine theologian John Damascene. Ogden then provides an analysis of the imbricated motifs within the three texts, isolating fourteen in all: the strix as an old witch, the strix at night, flying and avian transformation, flying and soul projection, screeching, snatching of whole bodies, snatching of individual body parts, the extraction of moisture, the imposition on a time-limit on the life of victims, fighting back against the strix, cannibalism and covens of striges, and the strix’s imperceptibility in relation to battles over both houses and bodies. This is a thorough section, the lion’s share of the book, and Ogden does not simply list the recurring and constituent motifs, highlighting whether they appear in all or only some of the texts. Instead, he provides parallel instances of such information, drawn from passing allusions in a substantial collection of additional sources, whether they concern themselves with striges in particular or with broader folk conceptions. In the consideration of the flying strix as an avian soul projection, for example, he incorporates various precedents from the Classical world, ranging from Homer and Virgil’s underworld ghosts that flock like birds, to a group of marvellous figures from Pythagorean tradition credited with the ability to fly, including Aristeas of Proconnesus (mentioned by Herodotus, Maximus of Tyre and Strabo), Hermotimus of Clazomenae (mentioned by Apollonius), and Abaris the Hyperborean (mentioned by Porphyry in his Life of Pythagoras). Similarly, Ogden draws polymathically from both Classical and medieval sources when discussing the snatching of bodies and body parts, referencing Gervase of Tilbury in the former and Plautus’ comedy Pseudolus in the latter. In so doing, Ogden provides a far broader picture of the strix than an assessment of just three texts would lead one to believe, drawing on information from both forwards and backwards in time to build up a comprehensive, culturally and temporally diverse image.

From this comparison of motifs, Ogden reconstructs the ideal narrative of a strix attack, what he defines as ‘the strix paradigm,’ and uses this to offer a more complete and final answer to the fundamental question of what a strix was. This paradigm defines the strix as a terrible woman that attacks babies, flying by night by transforming into a bird or bird-like creature and focussing her onslaught first on the exterior of the house in order to gain ingress via invisibility or permeability. Once successful in its intrusion, the strix may steal the entire body of the child, or rend its liver and other internal organs, or drain the victim of moisture.

In the third section, Ogden shows how the strix paradigm influenced the general representation of witches in the Latin literary tradition, something that becomes evident early on with the intersection of so many motifs, particularly in the prior discussion of striges gathering to feast on the bodies they had stolen, so reminiscent of the witches’ sabbat. Ogden suggests that the strix provides an explanation for the vastly different ways in which witches are represented in Greek and Latin literature, with the latter having greater emphasis on the morbid, predatory and gruesome. To this end, he analyses various Latin accounts of witches: Candida in Horace’s Epodes, Dipsas in Ovid’s Amores, Erictho in Lucan’s Pharsalia, the Thessalian witches in Apuleius’ Metamorphoses, and the unnamed witch who is described killing the slave Iucundus on his epitaph from early 20s CE Rome. In addition, there are the later accounts of the witchy innkeepers from St. Augustine’s City of God and the belief in the night-working witches mentioned by Burchard of Worms in his 1012–20 CE Corrector sive Medicus. Ogden introduces each excerpt and then highlights the strix-like motifs in what are rather striking reiterations of core themes, in particular the ability to gain ingress via small gaps, and the interest in matters corporeal.

In his fourth and final section, Ogden considers the strix via the analogous figure of Gello whose existence constitutes a longue durée that stretches from the child-killing demons of ancient Mesopotamia and Greece, right down to survivals in modern Greek folklore. He begins with the child-stealing Lamashtu demon found in Akkadian texts of the first and second millennia BCE, tracing her descent into the Classical lamia, but he also considers another predatory Mesopotamian demon, Gallû. Although they are male in their initial appearance, Ogden documents the Gallû demon’s evolution into the female bay-stealing figure of Gello, mentioned in a grimly ironic fragment by Sappho in which she describes an unidentified subject as “loving children more than Gello.” Ogden also uses this section to consider briefly a few minor threads, like related terms such as the men-transformed into birds called styx in Antoninus Liberalis’ Metamorphoses, the striglos/ strigla defined in Hesychius of Alexandria’s lexicon as either the inside of a horn/wing or as a little owl or a long-eared owl, and ultimately the more recent folkloric night spirit known as stringlos.

Like other entries in the Elements in Magic series, Ogden’s The Strix-Witch is a satisfying deep dive into a specialised topic with much to satisfy for those seeking information both on the predatory female figures such as the strix specifically, but also for those interested in the roots of the image of the malevolent witch.