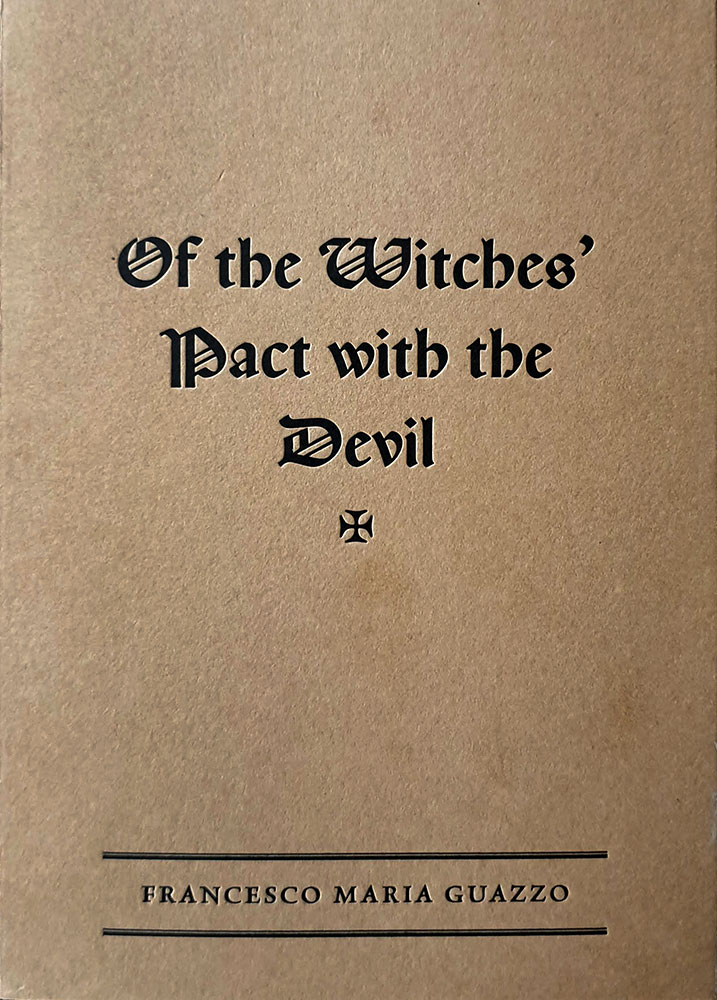 In October of 2017, Three Hands Press in association with Mortlake and Company, presented Witch-Ikon, an exhibition featuring what was described as “contemporary imagery of witchcraft emergent from the occult, esoteric and fine art milieus,” with work by Marzena Ablewska-Lech, Tom Allen, Claudia Avila, Francisco D, Dolorosa de la Cruz, Rik Garrett, David Herrerias, Timo Ketola, Rory MacLean, Roberto Migliussi, Johnny Decker Miller, Liv Rainey-Smith, K Lenore Siner and Benjamin A. Vierling. In addition to a 48-page, full colour exhibition catalogue (not to mention a similarly-named publications of essays and art that is still forthcoming), Three Hands Press released this little volume and made it available at the gallery.

Of the Witches’ Pact with the Devil is an excerpt from the Montague Summers-directed translation of Francesco Maria Guazzo’s 17th century witch hunter’s manual Compendium Maleficarum; said here to be the seventh chapter of Book 1, but in all other versions consulted it was listed as Chapter VI. Whether it’s the sixth chapter or the seventh, as it titles suggests, this excerpt deals with one of those key moments of the sabbatic narrative, making it ripe with imagery, and one for which that imagery was given very real form with the accompanying legendary woodcuts that have graced the covers of a thousand black metal demo tapes. 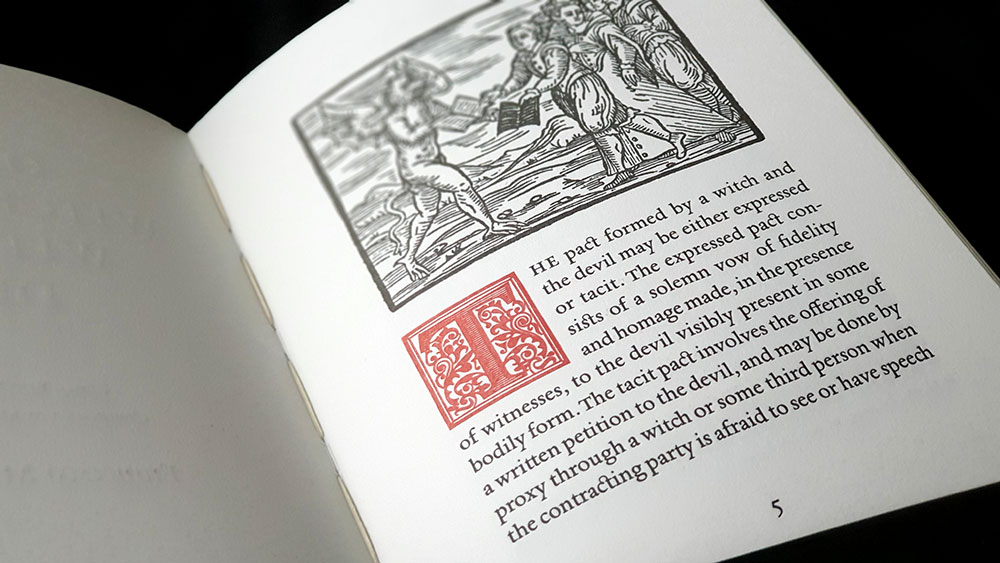 Guazzo describes the pact between the witch and the devil as either expressed or tacit, with the former performed in the presence of the devil, and the latter as a written petition that may be submitted by a proxy if the supplicant is afraid to speak directly to their new master. Common to both forms are certain matters that Guazzo arranges under eleven headings, beginning with an initial denial of the Christian faith to facilitate the removal of the chrism and the rubbing off the mark of baptism, and ending with an oath to never accept the Eucharist, to destroy all other church relics and to proselytise for the devil.

Designed by Daniel A. Schulke with execution of type by Joseph Uccello, Of the Witches’ Pact with the Devil is printed in two-colour letterpress by Dependable Letterpress, giving the book some lovely tactile and olfactory qualities, with its subtle debossing of the body copy (still more pronounced in the titles, subtitles and images) and the whiff of inks. Uccello renders the body in a serif face that’s hard to pin down but has the right mix of readability and a hint of the archaic, while the page headers are in a lovely blackletter-style variant of the Espinosa Nova face. This rotunda style is also seen on the cover and is used for the in-body numbering of the stages of the witches’ pact, which are further offset from their companions by being printed in red. Proving, its versatility, the one drop cap in the copy uses an illuminated style of Espinosa Nova, while the crosses that dot the book as decorative ends are drawn from its glyph set. Five of the original woodcuts from Compendium Maleficarum are used as illustrations, including the infamous image of the osculum infame. 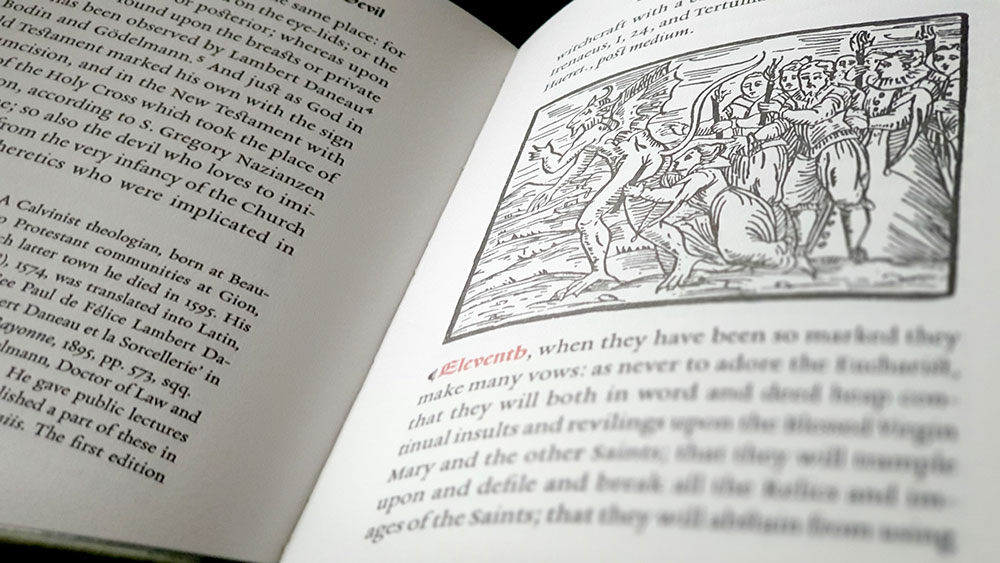 Of the Witches’ Pact with the Devil is presented without comment (save for the original footnotes of the Summers translation), so it feels more like a curio or replica than a contemporary reification of praxis. This is something confirmed by the unique production, and its attention to detail. Unfortunately, the content has not been privy to the same eye, and it is an imperfect transcription, featuring a smattering of errata, with transposed letters, and missing or wrong words. It’s not rampant, but there’s enough of it for it to become noticeable and set you off looking for more. 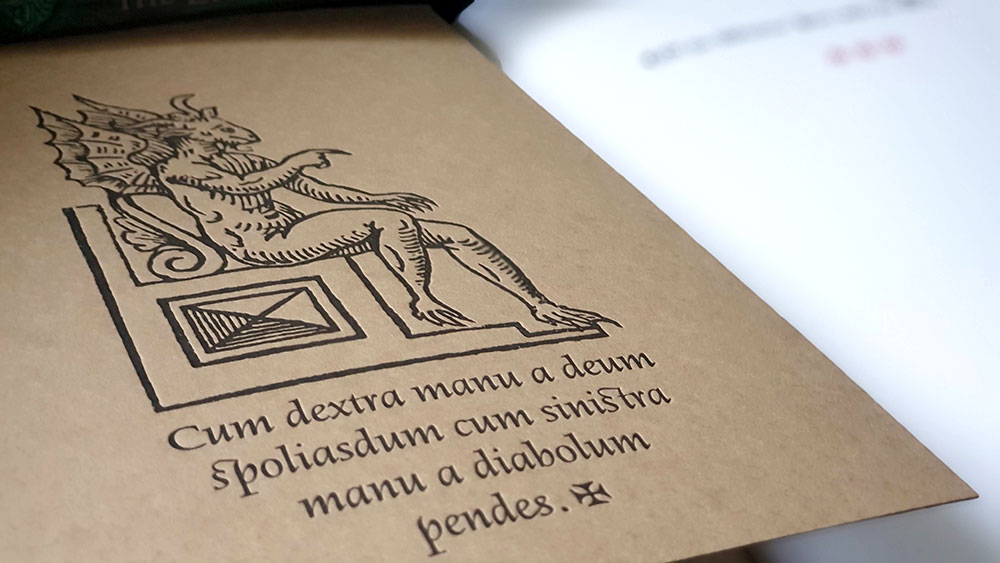 Of the Witches’ Pact with the Devil was made available in a softcover edition of 400 hand-numbered and hand-sewn copies, and a hardcover edition of 40 now sold out copies. Handbound by Klaus-Ullrich Rötzscher of Pettingell Bookbindery, the softcover is bound with a letterpress cover printed on brown card with French flaps, while the hardcover is in a full gilt leather cover with handmade endpapers. The French flaps of the softcover version featuring an image of the devil enthroned, extracted from one of the unused woodcuts, mirrored to face inwards on their respective flap, with a different Latin phrase beneath it; all with the same letterpress debossing of the cover and back elements.