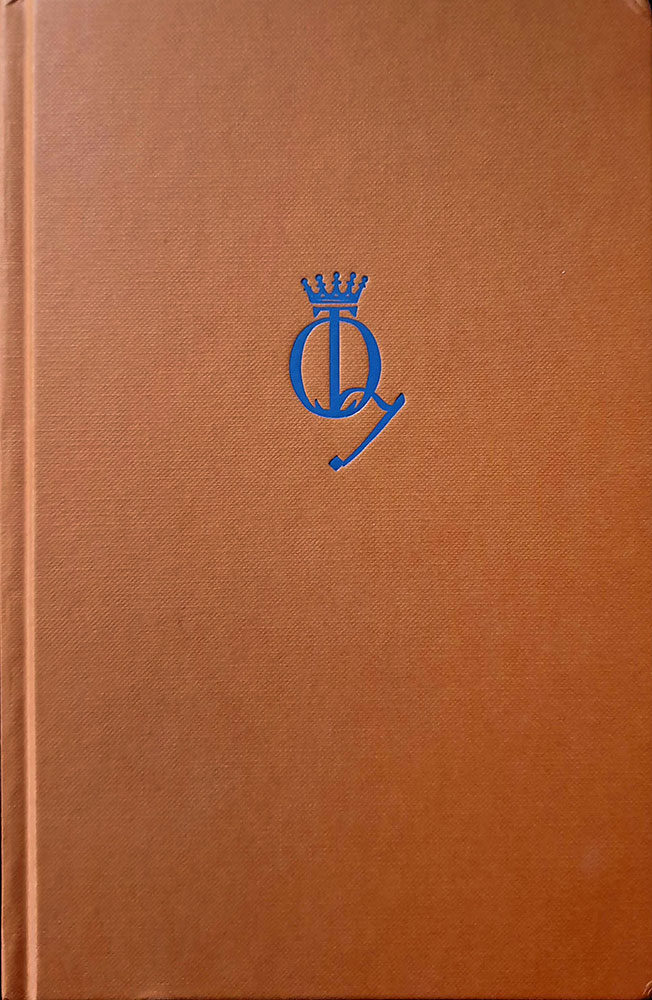 Since forming in 2018, Atramentous Press have quickly built a significant catalogue of releases, with this being their fourth title already. The Book of Q’ab iTz is one part magickal record, one part art portfolio, with the latter being what author David Herrerias is best known for. Mexico-born, Sweden-based Herrerias has created cover art in his distinctive wispy style of oils for black metal acts such as Irkallian Oracle, Akhlys and most spectacularly, Nightbringer, as well as featuring in occult publications from Three Hands Press, Anathema Publishing and others.

The Book of Q’ab iTz is divided into two sections: a written preamble that takes up a little under half of the work, and the Book of Q’ab iTz proper, which consists predominantly of illustrations by Herrerias. This latter section is, in turn, divided into two codices, presenting formulae of the Androgyne, and of the Xoëtic Alphabet respectively. The written preamble does two things: first, it presents an explanation of the modalities out of which the illustrative content emerged, with Herrerias describing his approach based on the Sabbatic Tradition as found in Andrew Chumbley’s Dragon Book of Essex, Qutub and Azoëtia. These are presented as either instructions to the reader, or as diary recollections of Herrerias’ own work. This preamble also  provides something of an explanation for the illustrations, with an exegesis, still somewhat veiled in obnubilating occult language, of the symbolism and the themes. Unfortunately, as all this written comment occurs in the first half of the book, it somewhat divorces it from the corresponding images, and the correlation between the two sections can be forgotten as you move forward (or subject to a constant flicking betwixt pages and the marking of places with fingers). 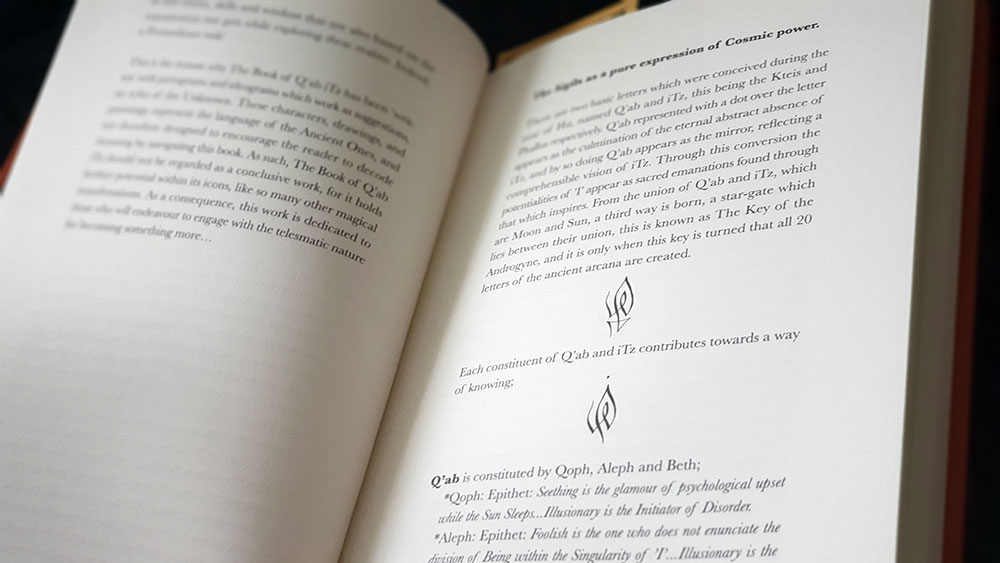 The images of Codex I, Formula of the Androgyne, are presented in a variety of usually dense and detailed styles, with a heavy calligraphic element being perhaps the most common motif. Here, Herrerias writes in a lovely, florid hand, often layering the text over images, or otherwise creating dense surfaces of typographic colour. While hard to read, even if you do speak Spanish, the text from some of these images is translated and printed, without explanation, in a section before the main images. Other than this curlicued text, the artwork here contains as its main feature a prevailing theme of the corporeal, featuring a variety of human bodies and individual body parts, usually dissolving or evolving into various forms. Phalluses and multiple sets of breasts abound, including several appearances by the winged-penis that is the fascinum, featuring, sometimes overtly, others covertly, in a variety of images. 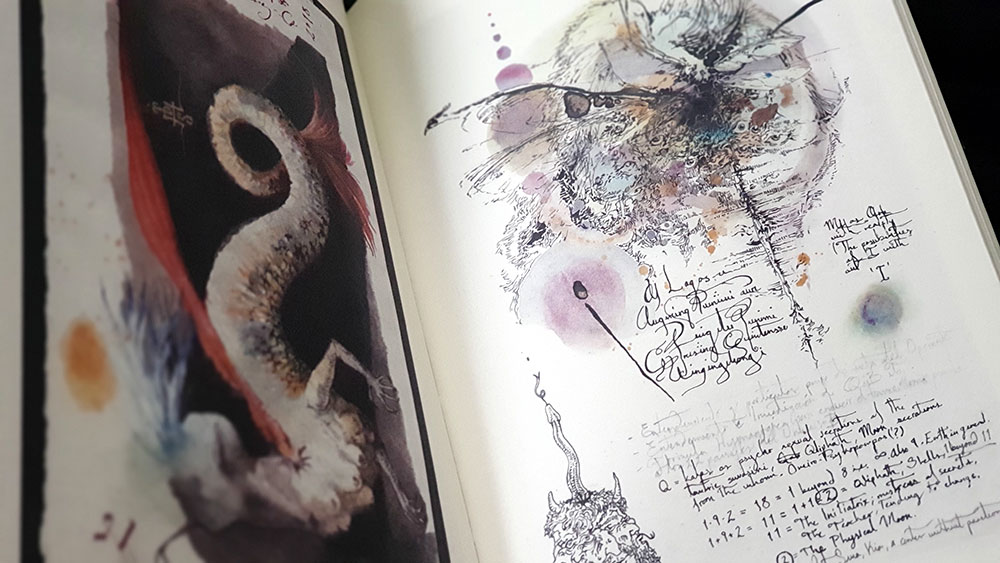 In Codex II, the images differ little in overall style, but there is an increasing emphasis on the incorporation of Mesoamerican motifs, with the usual pallet of western occult imagery being joined by figures that would not be out of place in Mayan codices. This relates to Herrerias’ integration of his Mexican cultural background incorporation into the Ophidian and Sabbatic path, with most notably the Tlacuache (Opposum) and the Tecolotl (Owl) featured throughout as significant totemic forces that mark the “moment of experiential ecstasy at the Witches’ Sabbat.” This is, perhaps, the most interesting element of The Book of Q’ab iTz as it provides a unique innovation of the array of symbols, and one that, if initially incongruous, begins to have a certain appeal. 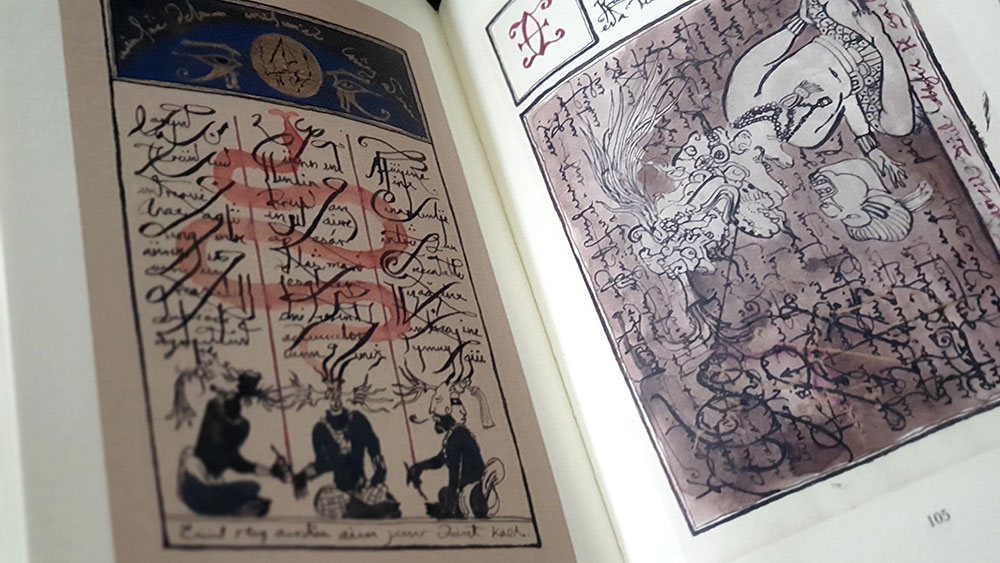 While presenting a body of work that is consistently his own, Herrerias employs a variety of styles for which, in some cases, there are some clear touchstones and precedents. Chumbley seems the most obvious, in particular the use of facetted plains and jagged, eldritch tendrils that have always been evocative of Lovecraft’s references to unsettling non-Euclidian geometry. Austin Osman Spare also lends a pretty indelible mark on the work, most immediately with Herrerias’ use of intense self-portrait in which he stares out at the viewer, recalling the same gaze from Spare in a multitude of images. Similarly, a totemic painting comprised of three faces stacked one upon the other seems like an obvious riff on Spare’s Mind and Body from 1953, while anytime human figures merge and dissolve into amorphous shapes, or steles combine frontalist godforms, sigils and mystic letters, it’s hard not to think of Spare’s oeuvre.

The final selection of artwork in The Book of Q’ab iTz moves Herrerias away from the pen and brush and towards the lens, with a series of black and white photographs documenting the formula of the Xoëtic Alphabet. Each of these darkly-toned images is accompanied on the preceding page by a brief, if cryptic, explanation of each stage in the process. 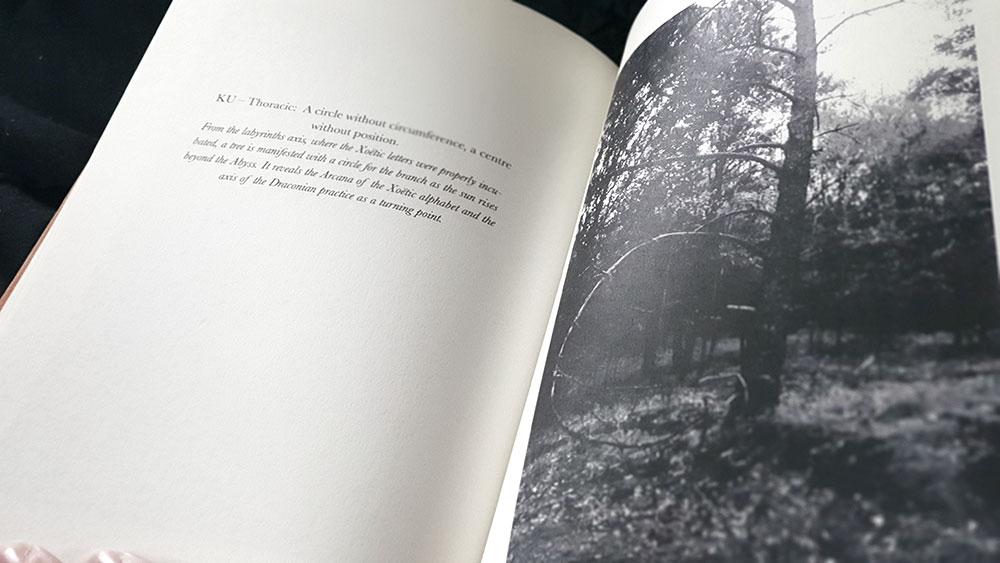 Given the effort that has gone into a title like this, from the choice of stock to the quality of printing, not to mention the hours spent by Herrerias in creating the images, it’s a shame more of the same wasn’t applied to finessing the text. There are deficiency in both editing and proofing, with the lack of the former meaning you can have a single sentence that runs to seven lines, while the absence of the latter sees the conflation of ‘its’ for ‘it’s’ and general spelling and grammatical mistakes. While Herrerias does admirably for someone whose first language, one assumes, is not English (and some areas are better than others), it would have been a kindness to have a more rigorous editor to tighten the run-on sentences, lipo the other bits of literary flab, and keep the tenses making senses. 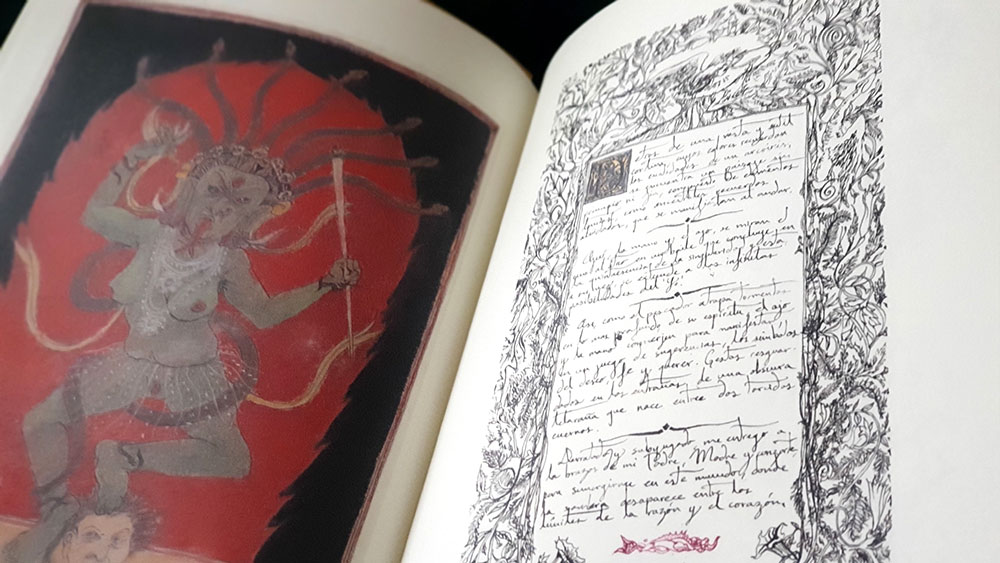 The Book of Q’ab iTz has been released by Atramentous Press in four editions: standard hardback, the Somatic special edition, the Telesmatic deluxe edition, and a trade paperback. The standard edition of 333 exemplars has a natural terracotta cover with central insignia and printed spine, binding approximately 120 pages of a weighty 150 gsm Munken Rough stock and natural heritage blue endpapers. The Somatic edition of 33 wraps the same in a goatskin cover, with gold foil insignias blocked to cover and rear, five foiled ribs on the spine, enclosed in a felt-lined cloth slipcase. Finally, the thirteen exemplar Telesmatic edition binds the above in polished goatskin cover, but houses it in a full leather solander box with a foil blocked title on the front and ribs to spine, and comes with a sigillic talisman by Herrerias on nagual-made paper from Mexico.