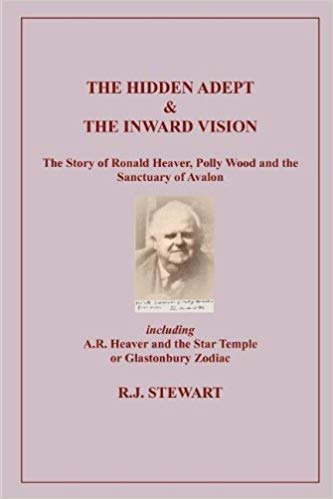 The title of this book by R.J. Stewart doesn’t give much away with regard to its contents, so we have to rely on the verbose subtitle to find that it tells the “story of Ronald Heaver, Polly Wood and the Sanctuary of Avalon.” Admittedly, that’s only slightly more informative unless you know who Ronald Heaver and Polly Wood were. What is presented here is intended to fill in that knowledge gap, providing a history of Heaver and Wood and also presenting a few bits from Heaver himself as an appendix half the book.

Before getting into the content of The Hidden Adept & the Inward Vision, one is struck by the formatting, which does not do the work any favours, being poorly presented and thereby creating issues in accessibility and comprehension. All text is typeset in fully-justified paragraphs of an incongruously generic and modern sans-serif that, as is characteristic of such a face, doesn’t aide readability. Subheadings are in a bolded variation of the same sans-serif and buttressed above and below not with considered spacing but by full paragraph returns, while titles are also presented in the same face and point size, but in uppercase (except for instances where they’ve been mistakenly left lowercase). The result, as one would expect, is an intimidating and impenetrable sameness, with zero hierarchy, and no anchors for the eye to latch on to. Indeed, one of the only instances of difference breaking up the homogeneity is when the line spacing of the body copy suddenly jumps or shrinks, sometimes within the same chapter. 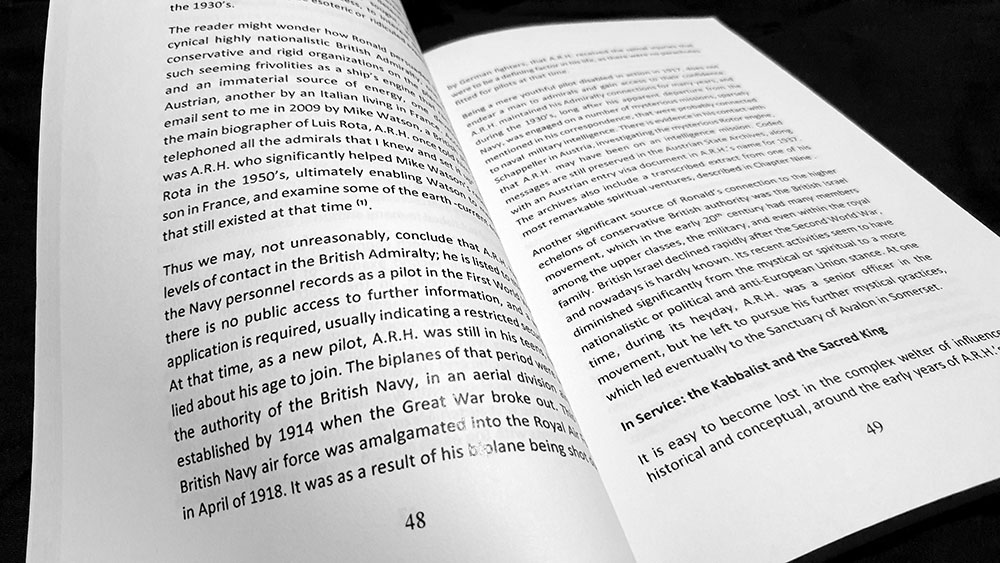 This dire formatting, along with the very humble and pink-hued cover, would appear to be the result of The Hidden Adept & the Inward Vision being effectively self-published by Stewart’s own imprint, with none of the checks and balances, or design flair, that one would expect from a dedicated publishing house. Unfortunately, this lack of editorial control in the formatting is paralleled in the content itself, which initially feels aimless and all over the place, lacking a clear narrative or structure. The start is notably hesitant and piecemeal, without any simple introduction that would give the reader any idea about who Heaver was and why he might be important. Even when Stewart gives a breakdown of the major stages of Heaver’s life, and a numbered listing of his inner themes, this hidden adept seems fittingly illusive, like you’ve joined a conversation halfway through. In addition, this use of numbered paragraphs, a device that Stewart employs several times, helps only make the book feel disjointed, when incorporating the information into coherent sentences and paragraphs would have assisted in flow and attendant comprehension.

The erratic quality of the formatting and editing perhaps betrays the very desultory nature of the book’s content, with Stewart drawing on but a few personal encounters with Heaver and general summary of the facts for the first 52 pages and otherwise relying on documents written by Heaver for much of the remaining pages. These are drawn from a variety of sources including the archives of the Findhorn Foundation and rather than be summarised within the body or presented at the rear as appendices, they form entire chapters, uniformly formatted like Stewart’s own content, so it can be hard to tell at a glance where one starts and the other finishes; save for the clue that Heaver’s writing often has paragraphs unnecessarily bulleted with dashes. In all, this adds to a disjointed experience where the reader struggles to make sense of what is presented, adrift in a miasma of spasmodic content and minimal formatting. 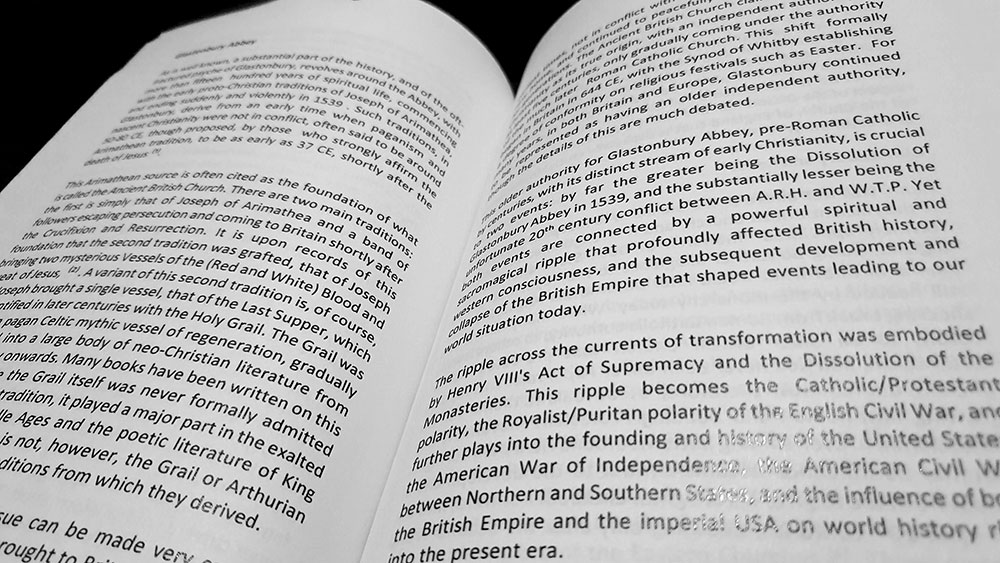 When you do wrestle some sense from the combination of Stewart’s narrative and Heaver’s own writing, what emerges is the image of a man just a tinsy bit caught in a slip of ever-so-slightly self-aggrandising myth: a pilot in the Great War (taking his first solo flight after just over three hours of instruction, naturally. Woof!), later shot down in a dogfight with Manfred von Richtofen’s flying circus (though mercifully, there’s no claim that it was by the baron himself), and then, as an older gentlemen, someone with the ear of the highest echelons of government both military and diplomatic. He was suddenly paralysed a decade after the Great War, just as a newspaper described the General Strike as a paralysis that swept over the country. There’s no mention of how the headlines when the strike ended correlated with Heaver’s then physical condition, perhaps because ‘Strike ends but country inexplicably still paralysed and feeling a bit cranky but would love a cuppa and bacon sarnie, thanks Polly’ wouldn’t have made much sense. This idea of a grand mission permeates Heaver’s story, with the divinely-ordained fate of England intertwined with his as if he were some wounded Fisher King awaiting his inevitable healing (since despite being told by Sir Edward Farquhar Buzzard, future Physician-in-Ordinary to King George V, that he would never walk again, well, he sure showed ‘em. Doctors eh? What do they know?).

As the invocation of the Fisher King suggests, there are streams of Arthurian and Arimathean imagery that run through the Heaver story, including its very own grail-like quest with trips to Palestine and much deeds of derring-do. The object in question, the Thaumaturgal, was a jewel apparently handed down in a line of descent that included Melchizedek, John the Baptist, Jesus, Joseph of Arimathea, and ultimately, Heaver, who travelled to Jerusalem and buried it in the Garden Tomb, a site favoured by some Protestants as the burial place of Jesus; only to have it make its way back to England, irony of ironies, after being discovered by the tomb’s caretaker whilst doing some cleaning. Heaver attached great significance to his placing of the Thaumaturgal at the Garden Tomb, and its subsequent perambulations, seeing it as an event foretold in Apocalyptic literature as the binding of Apollyon. All very exciting if suppositious stuff that with a little more coherent narrative could have turned into the kind of dashing occult memoir, dancing on the intersection between fact and fiction, worthy of psychic-detective era Andrew Collins or Michael Baigent and Richard Leigh.

Other than these adventures, and aside from a brief mention (for bonus fortean points) of Heaver’s loose connection with the free energy device of Karl Schappeller, The Hidden Adept & the Inward Vision largely concerns itself with various figures connected with Heaver and the general mythos surrounding Glastonbury as a spiritual locus. The latter concerns itself principally with the Arimathean aspect of the site, with Heaver’s mystically inclined Protestantism and British Israelitism finding simpatico with the claims of Glastonbury as the home to a pre-Rome incarnation of Christianity. As part of this, there’s a relaying of the minutiae of a feud between Heaver and Wellesley Tudor Pole (another Glastonbury spiritualist and grail-seeker), with the two cast as Protestant and Catholic sides in a millennium-old struggle over the location. This consideration of the Glastonbury ‘scene’ is also shored up with a full chapter biography of yet another figure, Dr. John Arthur Goodchild, someone whose at best minimal association with Heaver makes this section feel like a standalone essay.

The final section of note fulfils a promise made on the cover with an exploration of the Glastonbury Zodiac popularised by Katherine Maltwood, and Heaver’s connection to it, or opinion about it. This takes the form of a lengthy essay by Stewart originally published in 2008 and here revised and expanded to create its own distinct part of The Hidden Adept & the Inward Vision. The connection with Heaver rests on a small leaflet that he wrote on the subject, which Stewart quotes and dissects, paragraph by paragraph, stretching the material as far as it can go. Stewart uses this opportunity for a fairly comprehensive survey of the idea of the Glastonbury Zodiac, emphasising the mystic over the material, and making it something that must ultimately be experienced on the ground and within the place, rather than from a distance or, in the case of studying aerial photos, from above. The pamphlet by Heaver is by no means a substantial or profound piece of writing but Stewart tries to make it so by claiming that it was written using the ‘Language of the Initiates,’ where everything, no matter how mundane, is conveniently laden with import. Even antiquated and admittedly false ideas, like Somerset being given its name by Sumerian astronomer-architects five thousand years ago, are juggled to fit into some vague ancient truth that doesn’t need to be historically true because some other old weirdos held vaguely similar ideas at some point.

Things conclude with a description by Stewart of how he continues working in the spirit of Heaver and Wood, as well as an appendix of astrological charts for Heaver (himself a sidereal astrologer) and a selection of various images, some lower-res than others, related to Heaver directly and not-so-directly. 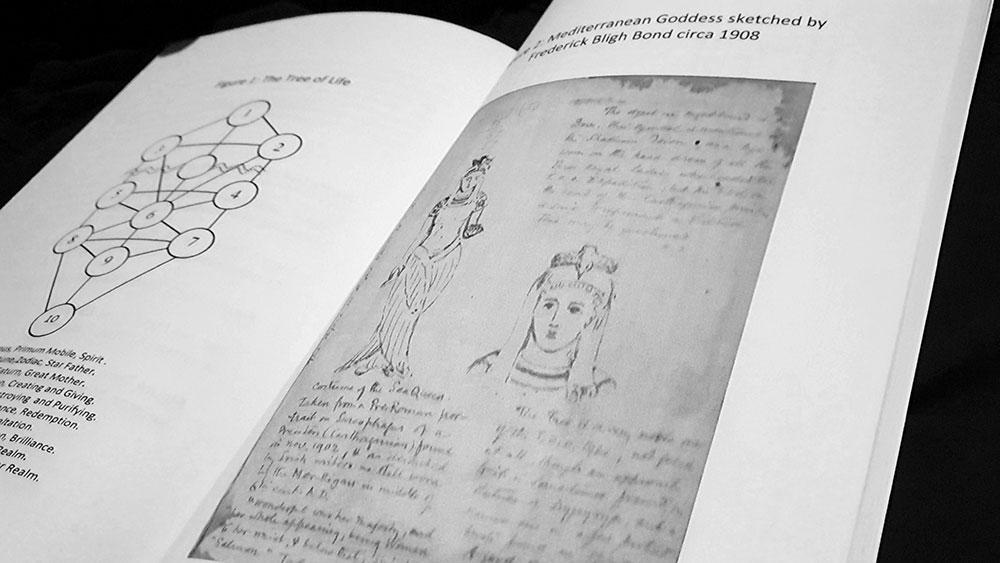 The Hidden Adept & the Inward Vision has the beginnings of what could have been an interesting book had more attention been paid to it. Those instances in which Stewart strays from the meagre information about Heaver into broader discussions of the various mystics of Glastonbury hints at a book that, if it focused on that, could have been more cohesive, less directionless, and less hamstrung by the need to apotheosise his mentor. And it is allusions to Heaver as Stewart’s mentor that suggest another missed opportunity, such as when he tantalisingly mentions how direct statements from Heaver influenced not only his spiritual development but his significant trilogy of tellurian-faery books: The Underworld Initiation, Earth Light and Power Within the Land. There’s no explanation about what these statements were and how they impacted the material, resulting in perhaps what could be uncharitably read as an inordinate claim to spiritual descent. Despite enjoying Stewart’s other books for several decades, The Hidden Adept & the Inward Vision is disappointing and unsatisfying, arguably because it lacks the very clarity of his other works.

2 Responses to The Hidden Adept & the Inward Vision – R.J. Stewart