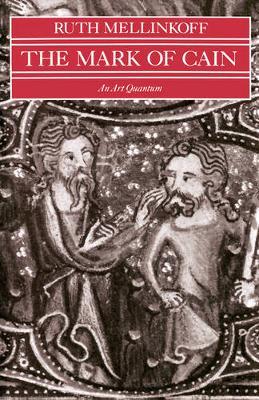 Ruth Mellinkoff’s body of work mines a particularly grotesque and atypical vein of Judaeo-Christian tradition, dealing with the appearance of monstrous and aberrant body parts, often incongruously placed, such as in her study of the horned Moses in medieval art and thought, or her meditation on Matthias Grünewald’s Isenheim Altarpiece. This interest in anatomy that is both sacred and profane is continued in The Mark of Cain, a slim volume for a concept whose source material is but a single verse in the book of Genesis.

It is testament to the evocative nature of the mark in question that just over a hundred pages can be dedicated to it here, and as the blurb on the inside cover notes, few biblical verses evoke the power of the imagination than the scant and ambiguous words “And the Lord set a mark upon Cain, that whosoever found him should not kill him.” Nevertheless, the back matter does qualify that this is by no means a definitive work, offering a demonstrative and suggestive approach as opposed to a comprehensive or conclusive one. This is something that is evident throughout the book, with Mellinkoff pulling various strands together, but inevitably and understandably drawing no conclusions, if they were hers to make, based on the meagre scriptural evidence.

Given the brevity of its biblical mention, the Mark of Cain acts as a gateway into wider discussions, and this is how Mellinkoff begins, by following in the footsteps of early church fathers and considering not the mark itself, but how it relates to the idea of Cain’s repentance and forgiveness. In these instances, dating back to early Jewish thought and into the early church exegetes, the ‘what’ of the mark was less important than whether it served as punishment or protection for Cain, with Cain himself thereby being the mark, the example, the lesson. 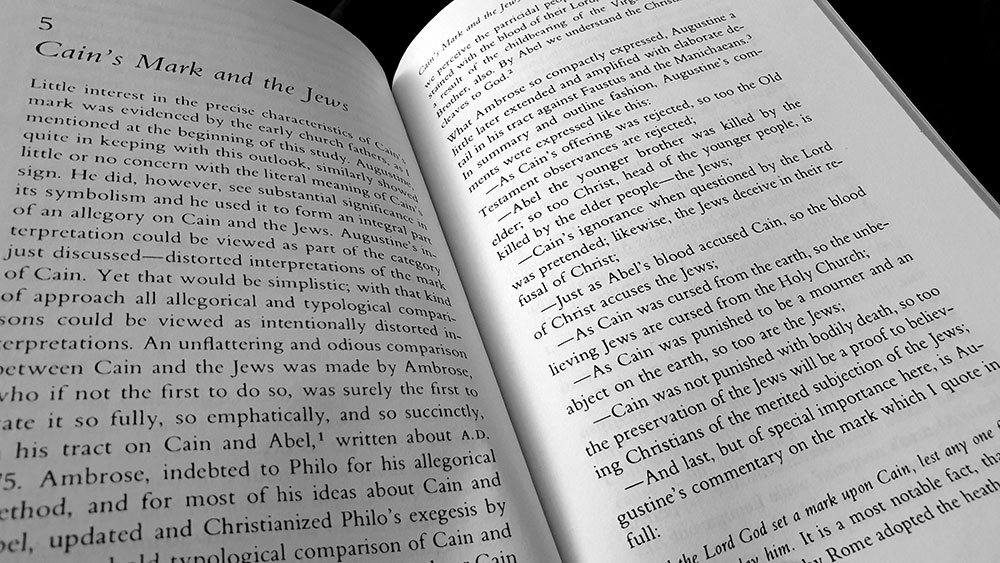 In her third chapter, Mellinkoff turns to the more explicitly corporeal interpretations of the Mark of Cain, noting that the idea of it being on Cain’s forehead, despite this positioning not being mentioned in the book of Genesis, has become so popular that it makes its way unquestioned into not just common retellings but academic texts and encyclopaedia entries. This is the largest chapter within this title, and Mellinkoff covers off a variety of options from across three millennia of Judaeo-Christian thought, including various text marks (the tetragrammaton, the Greek omega or some unspecified Hebrew letter from the Torah), a cross (linking Cain with his close analogue, the Wandering Jew who is similarly marked), blemishes such as leprosy or horns, and even beardlessness. One interpretation that receives much attention here is not a mark on Cain’s body but a mark created by it, with the sign being popularly regarded as a trembling condition he possessed, thus aligning with an excerpt found only in the Septuagint version of Genesis in which God curses Cain with groaning and trembling; the curse becoming the mark itself.

Being an academic work, and one from 1981, there’s no consideration given here to contemporary interpretations of the Mark of Cain from various Qayin-focussed occult traditions; such as in the 218 current where a threefold Mark of Qayin and Qalmana was bestowed on the couple by Satan and Lilith, or in the work of the Cultus Sabbati, whose Psalter of Cain features a total of eight Marks of Cain, each denoting an area of expertise or a moment in his story. With that said, there are moments included here that provide interest for those that way inclined, such as a discussion of Lebor Gabála Érenn (The Book of the Taking of Ireland), in which the Cultus Sabbati’s eight marks have a near analogue in seven wens that afflict crooked Cain, as it pointedly calls him, marking his forehead, his cheeks, his hands and his feet like diabolical stigmata. Similarly significant is the Cornish mystery play Gwreans an Bys (The Creation of the World), in which Cain appears alongside his sister Calmana and doubts the apotropaic properties of the horn with which God has marked him, echoing Byron’s later Luciferian Cain by saying: “Trust him I will not, for fear of being deceived.” The image of the Mark of Cain as horns is a darkly resonant one that is remarkably widespread despite being unattested canonically, appearing in early Armenian texts, an early tenth century Irish Adambook, twelfth century French sculpture, and thirteenth and fourteenth century English illuminated manuscripts. One particular thirteenth century English psalter illustrates this profoundly, with an image of God marking and cursing Cain (one of the rare depictions of this scene across Western art), showing a scythe-wielding Cain adorned with two distinctive black horns ‘pon his head.

In her penultimate chapter, Mellinkoff turns to those examples in which, as she defines it, the authors consciously and intentionally distorted the idea of the Mark of Cain. Chief amongst these is Hermann Hesse’s treatment of the mark in his 1919 novel Demian, in which the eponymous hero defines the otherwise invisible mark as a feeling of elite otherness, worn by possessors of a secret knowledge who recognise it, like for like, on those who also wear it: “But whereas we, who were marked, believed that we represented the will of Nature to something new, to the individualism of the future, the others sought to perpetuate the status quo.” Suffice to say, Mellinkoff is not a fan, and having never met a swaggering misanthropic, nihilistic 21st century nightside occultist, she finds the appeal of the concept inconceivable, describing it as puerile, with it being impossible, even with all our modern abstraction, to treat Cain’s act of fratricide so superficially that we elevate him as an anti-hero. 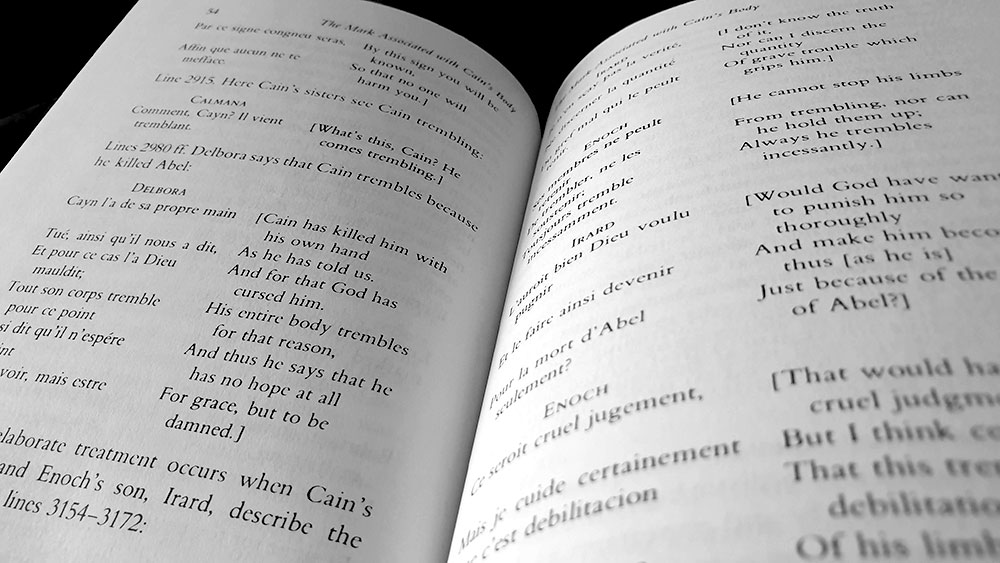 Mellinkoff concludes with a brief chapter on how Cain and his mark have been given a racial interpretation. This follows on from an earlier discussion on how Mormon founder Joseph Smith established blackness as the mark of Cain, thereby supporting slavery, forbidding intermarriage and disqualifying black members of the church from the priesthood; a status that as of the first publication of this book in 1981 had only been overridden for just four years. The racism of this chapter concerns itself not with skin colour but with the Jews, with Saint Augustine being the first to influentially identify Cain as an allegory of the Jews: cursed, faithless murderers both, set to wander the earth, yet eternally preserved as an abject lesson to the faithful. As for the Mark of Cain in this allegory, Augustine obliquely hinted at a sign of Jewish law that had always marked them as separate, with later commentators such as Isidore of Seville and Bruno of Asti being less delicate and explicitly identifying it as the mark of circumcision. Mellinkoff traces the history of this idea of Jews not just being faithless outsiders but identifiably so, to medieval badges that Jews were prescribed to wear and which reach a modern apex in Nazi Germany. 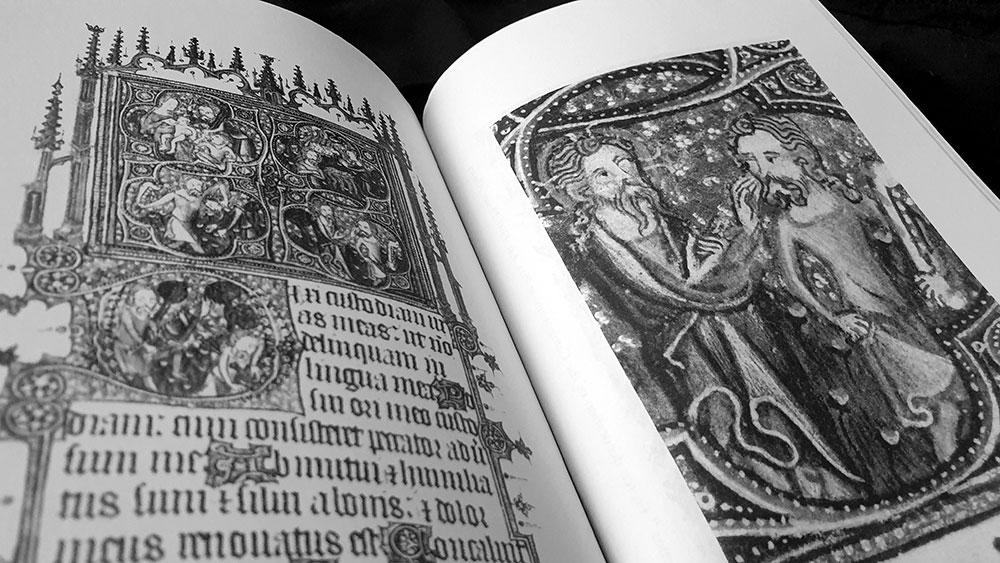 Despite its brevity, there is a thoroughness to The Mark of Cain, with Mellinkoff writing in a clear, authoritative style, though not without personality, such as in her unabashed love for the Syriac Life of Abel, a fifth or sixth century work she considers to be without parallel until Byron’s Cain. The Mark of Cain includes an exhaustive reference and end notes sections, and concludes with a 22 image gallery of various depictions of Cain and his mark.

Published by Wipf and Stock Publishers

One Response to The Mark of Cain – Ruth Mellinkoff