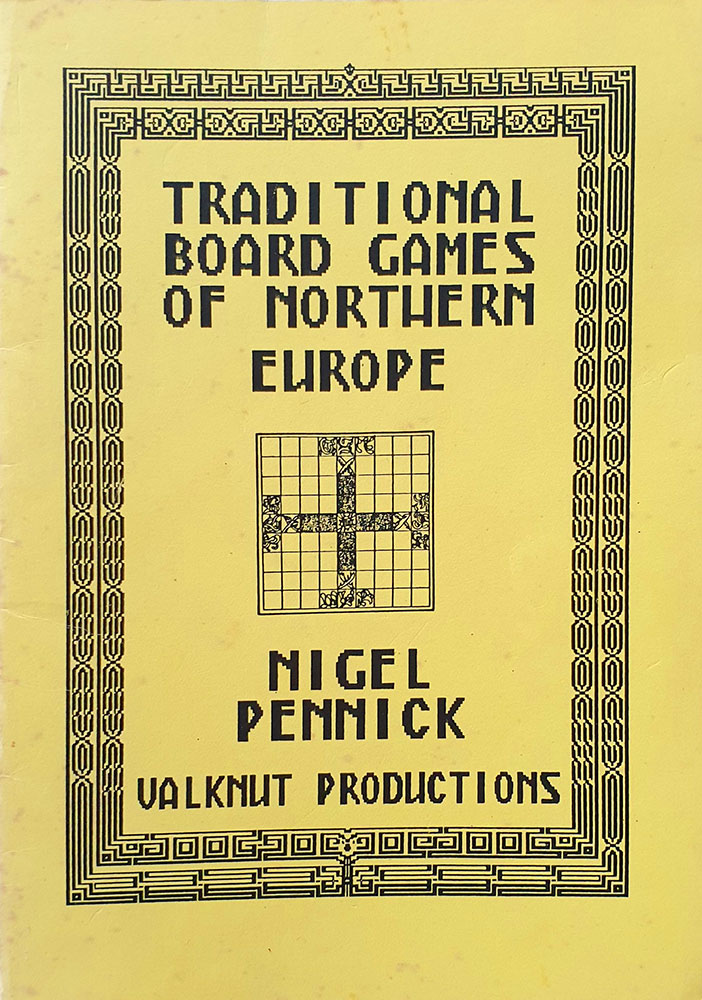 This slight work was published in 1988 by Nigel Pennick’s own imprint Valknut Productions,   a name that must surely be shared with some small black metal or Viking metal record label. As befits the time (and the analogy with 90s metal underground culture), Traditional Board Games of Northern Europe is photocopied on A4 folded and stapled to A5, with the cover similarly printed on a yellow card. This situates this work within a verdant period of esoteric mailorder self-publishing from authors who would go on to be published in more substantial formats, with Caerdroia emerging from Essex, Paul Devereux publishing The Ley Hunter, and with the busy Pennick founding the Journal of Geomancy (later rebranded as the more generic and less fun Ancient Mysteries) as well as running yet another similarly-themed imprint called Nideck from Bar Hill, Cambridge, from which the seemingly aligned Fenris-Wolf Publications also operated (not to be confused with the similarly-named journals from either the Order of the Nine Angles or Carl Abrahamsson).

The typesetting of Traditional Board Games of Northern Europe also betrays the time in which it was published, with the body text set fully justified in a blocky word processor serif, devoid of any finessing with paragraph breaks or indents, but with at least the mixed blessing of a faux italic. The type on the cover, rear and inner is treated in an equally time-stamped display face, a san serif 8-bit type that matches the similarly pixelated border frame. It’s all rather charming, if a little hard to read with the dense typographic colour of the spacing-averse body text eschewing the conventions of readability and making a 24 page booklet harder to briskly read than one would expect. 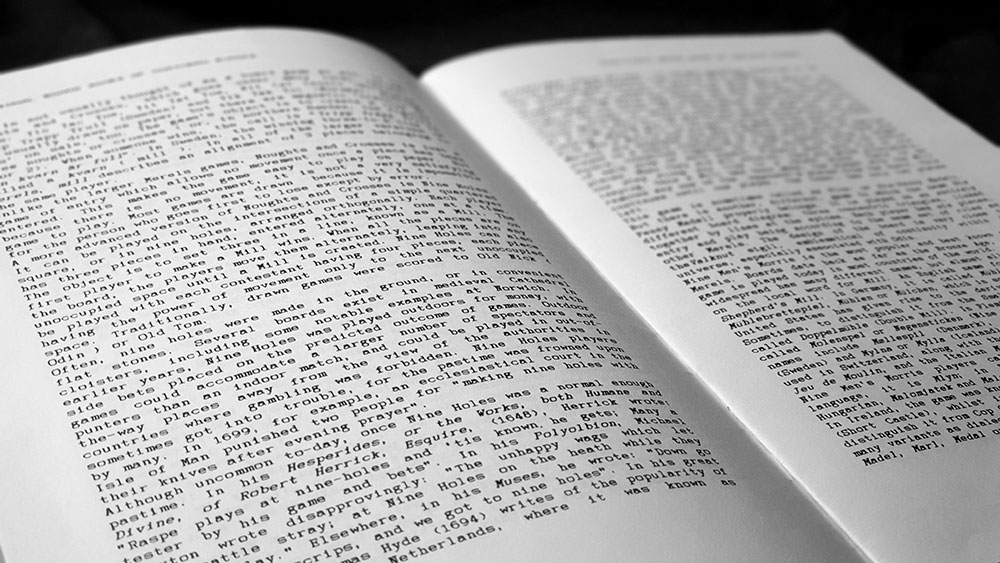 Traditional Board Games of Northern Europe is perhaps Pennick’s first published consideration of its subject matter, something he would then return to as part of his larger works, notably in the Weiser-published Games of the Gods the following year, and also, if memory serves, as part of his 1992 book Rune Magic. It discusses four types of games variations of which have been found across Northern Europe, Scandinavia and the British Isles: merels (and its variants), tafl, fox and geese, and gala.

Pennick dives right into things with only a little in the way of historic preamble, explaining the method and rules of merels-based board games such as Nine Men’s Morris, Mill, and in a simpler form, the humble noughts and crosses. These merels-based games receive the most attention here, understandable given their prevalence, variation and persistence, followed by tafl and then briefly fox and geese and gala. There is no real sense of how a particular game might have evolved and made its way from one place to the other (perhaps this has never been documented) and instead, references to various forms of the game simply situate them in their location and give them their name and any distinguishing characteristics. 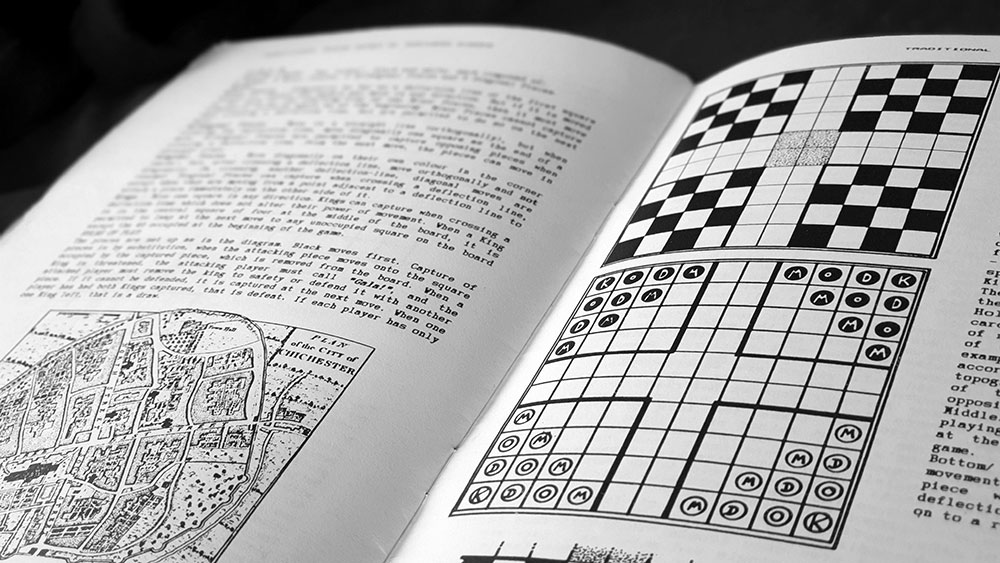 Pennick writes with an assured confidence and familiarity with his subject, though it is inevitably a little unpolished compared to his later writing. With the unsympathetic formatting, and often large run-on paragraphs, these pages can feel like something of an info-dump, with Pennick presenting everything in an encyclopaedic manner without much room to breathe either visually or intellectually. Unlike an encyclopaedia, though, there’s nary a trace of references, with no citations in the body and not even a bibliography in the back. Considering the amount of information in here this is a little disappointing, as it provides an intriguing but dead end in terms of research.

The considerations in Traditional Board Games of Northern Europe betray many of Pennick’s other interests, in particular geomancy with merrels and in particular tafl acting as analogues of the earth or its mechanisms. Pennick draws attention to a version of a tafl board found in a bog near Moate in Ireland’s county Westmeath which incorporates a handle carved in the shape of a human head, the board becoming anthropomorphised as a Ymir-like cosmic body upon whose surface the game is played as they move around the giant’s navel. Merrels, meanwhile, with its references to mill terminology creates an obvious analogue with the cosmological idea of a World Mill. He likewise notes that the layout of Gala reproduces the Holy City Plan that provided the sacral blueprint for the design of many ancient European towns. 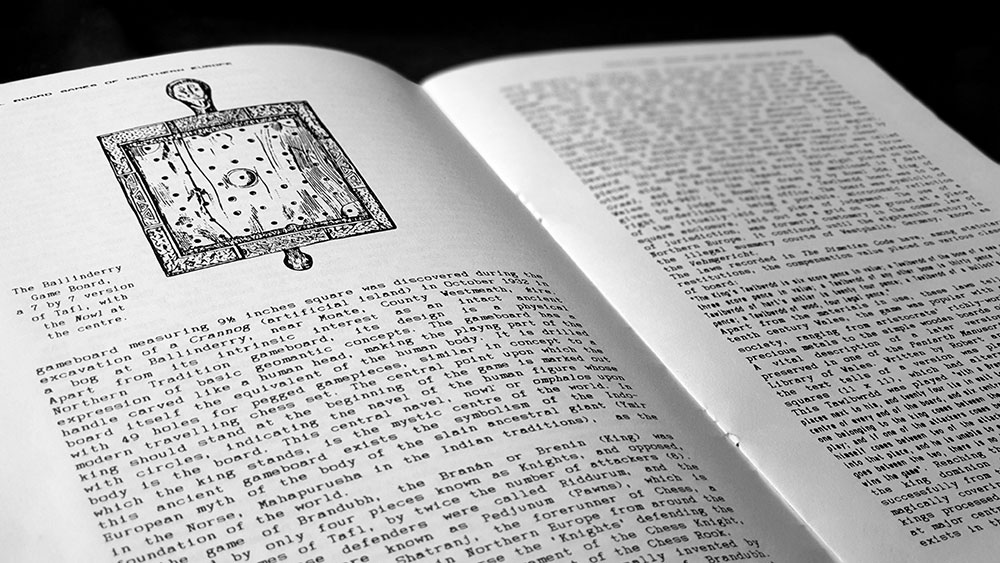 Pennick concludes Traditional Board Games of Northern Europe with a recapitulation of the rules for playing all five games, providing a handy reference for those who want to give it a go without wading through the body text.

While presumably nigh on impossible to find now, Traditional Board Games of Northern Europe is a valuable 24 pages, especially considering how unlike so many other areas from this field of study, so little has been written about these games in the ensuing years; and with the games providing a fertile, though unexplored, opportunity for magical application.