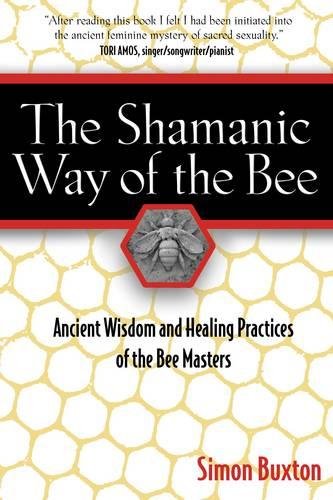 Simon Buxton’s 2004 book The Shamanic Way of the Bee doesn’t do itself many favours coming out of the blocks, bearing the faintly ridiculous subtitle of Ancient Wisdom and Healing Practices of the Bee Masters and having a back cover blurb that injudiciously states that “bee shamanism may well be the most ancient and enigmatic branch of shamanism.” Putting aside images of little bee-shaped ascended masters, buzzing amiably around in darling striped robes and cassocks, The Shamanic Way of the Bee describes a form of what could be called shamanism in which honey plays a pivotal role as a curative and spiritual tool; and something to which an even deeper meaning is hinted at in the cover blurb when it describes magico-sexual ‘nektars’ that promote longevity and ecstasy – ooh, matron.

At its heart, this is a spiritual memoir, rather than a practical workbook, and what Buxton presents here comes entirely in the form of a biography from which any application must be gleaned by the reader themselves. It begins when, as a nine year old living in Austria, young Buxton was cured of a near-fatal bout of encephalitis by a neighbour; a, would you believe, former university professor who had lectured for nearly half a century and travelled to the farthest corners of the worlds, lived with the simple ethnics and learnt their mysterious ways. To reuse a catchphrase from a previous review, thrilling Boy’s Own stuff. Despite this convenient pedigree, Herr Professor, as the young Buxton called him, features little here, as the family moved on soon after the miraculous curing of their son, and eventually said son returned to England. Over a decade later, Buxton met another wise, old and well-travelled man, a beekeeper by the name of Bridge who provided the introduction to what occurs in this book.

Buxton describes how, after encountering Bridge the Bee Master by chance, he entered into an apprenticeship with him, being given the name Twig and introduced to what is described as the conveniently alliterative Path of Pollen. While the apprenticeship began with simple lessons drawing from the lives of bees and the hive, honey and mead, things evolved in complexity until Buxton underwent an initiatory incubation brought on by the venom of bee stings, creating visions in which he became a drone within a hive. This then led to encounters in the real world with the Bee Mistress and her six bee priestesses called Melissae, and ultimately to a discussion of the ten nektars they produce – based wholesale on the idea of the ten kalas from tantra, as popularised within this circle of occultdom by Uncle Kenneth. Then Buxton had to kill a deer by suffocating it with pollen – as you do.

If this all seems too amazing to be true, it is. As documented in reviews on Amazon.com and Goodreads by Ross Heaven (another Destiny/Inner Traditions author with a plethora of his own books on themes shamanic, and who apparently ghost wrote this for Buxton), The Shamanic Way of the Bee contains significant sections plagiarised from works by P.L Travers, the creator of Mary Poppins. While it would have been endearing to see a magical nanny practically perfect in every way pop up in the book’s scenes, it’s a lesser known work by Travers that provided Buxton with some of his apian wisdom. A student of Gurdjieff and an associate of George Russell, Travers had a passion for mythology which she expressed in articles for Parabola magazine,  and which were then collected as the book What the Bee Knows – Reflections on Myth Symbol and Story. Where Travers mentions listening to a radio reporter who was describing the ceremonies of an African tribe at the end of their lunar or solar year, Buxton turns this into a story he heard as a child, though remarkably his recall is perfect, repeating phrases word for word from her account. And it’s not just Buxton who cribs from What the Bee Knows  because he has Bridge apparently dipping into his own copy on the sly before dropping some knowledge, often phrase for phrase. His first lecture has a lengthy section that wholesale copies and pastes, with only very minor edits, a section from Travers on bee etymology and of the act of be(e)-ing, presenting her words as his own, even describing how his eyes bore into Buxton as he totally ripped her off and in her words intoned: “It is a matter, merely, of listening.” 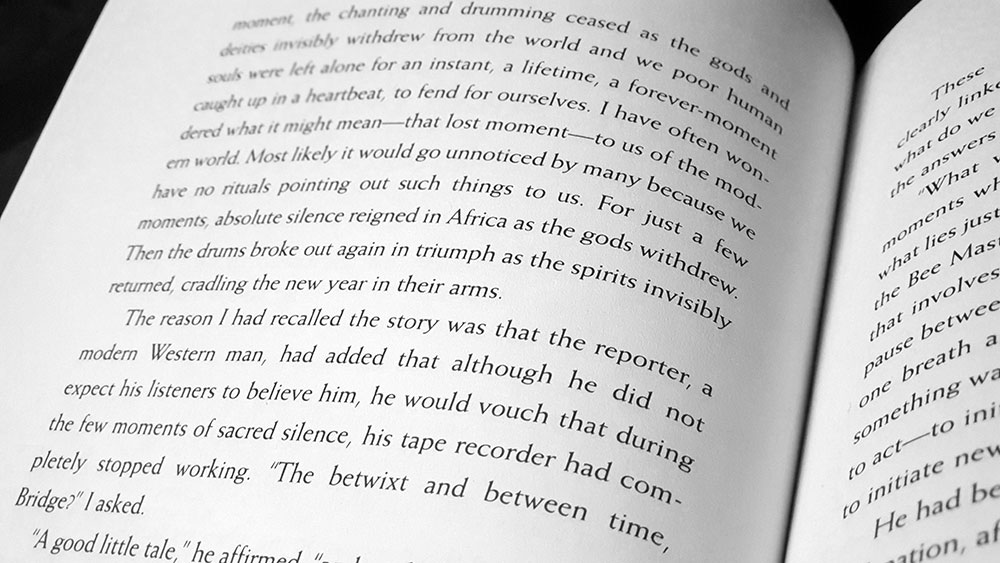 What is staggering about this is just how shameless it is, with Buxton copying Travers right down to her phrasing and punctuation, not even giving the appearance of paraphrasing. Of course, even paraphrasing would be problematic, as these drops of honeyed wisdom are meant to be coming from a wise Bee Master, who one would hope is not sitting there sneaking peeks at his well-thumbed copy of What the Bee Knows. Amusingly, Buxton ruminates on how remarkable it was just how much he could recall from Bridge’s lectures, a technique the learned Bee Master also possessed and had taught himself. Yes, quite remarkable.

Naturally, if you’re going to put the words of others into the mouth of your mysterious white shaman beekeeper, why stop at Travers, and indeed, secret bee shaman information apparently collected by Bridge on his great white professor expeditions to darkest Australia and South America can be found in standard ethnographic literature. In one case, Buxton mentions that Bridge worked with the Kayapo of the Amazon, appearing to quote the old beekeeper when he talks of Bep-kororoti, a powerful shaman “who was taken into the sky in a flash of lightning.” A little researching shows that this first-hand information is just extracted from Keeping of Stingless Bees by the Kayapo’ Indians of Brazil, a paper by Darrell A. Posey in a 1982 volume of the Journal of Ethnobiology, and the quote marks should be around the words of Posey, not the fictitious Bridge. 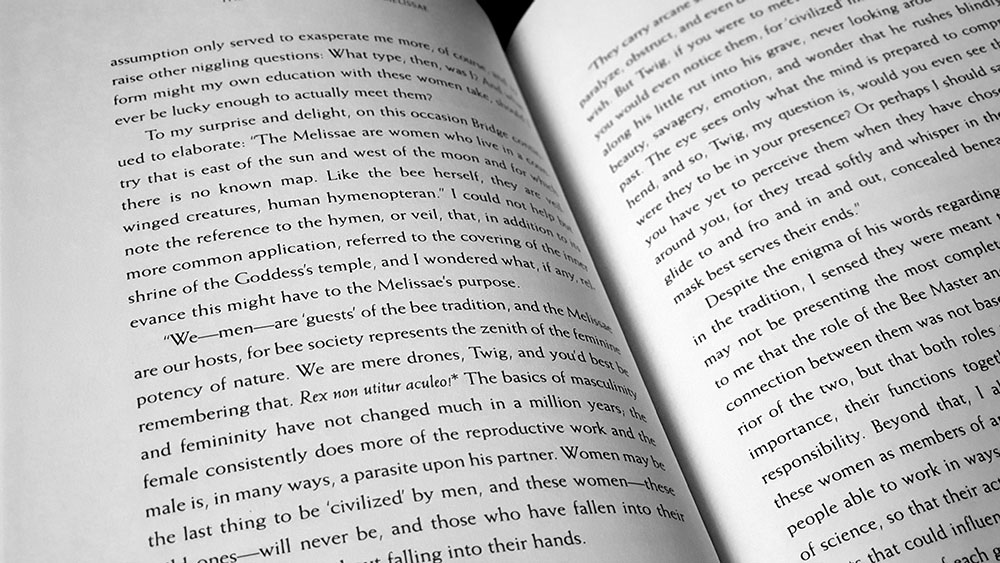 It’s quite fun to grab an excerpt from The Shamanic Way of the Bee, especially if it’s something apparently said directly by Bridge, and see where it came from. When Bridge sometime in the late 1980s told Buxton that “The history of Mead is as long, rich, and captivating as the beverage itself” he apparently had a time-travelling web browser open and was reading verbatim from a website in the year 2000. This is a website that, strangely enough, also has the words to a verse that according to Buxton, Bridge had just spontaneously spoken in celebration of mead while doing a lively jig; a verse which the website naturally credits to its author (Howell, Clerk to the Privy Council, in 1640), while Bridge and Buxton, of course, do not. For the record, this website, since changed but preserved in its 2000 state by archive.org’s WaybackMachine, is that of Sky River Brewing, whose history of mead proved popular and, in addition to having several paragraphs swiped by Buxton and his mead-toasting beekeeper, has been replicated in various states across the internet, usually by other meaderies who, unlike Buxton, often credit their source. Once again, the shamelessness and audacity here is staggering. While you can imagine Buxton feeling safe cribbing from a little-read book by Travers, it takes a certain level of brazen temerity, not to mention recklessness, to grab several paragraphs of some well-travelled web content, leave it largely unaltered and claim it as your own.

It’s all a little embarrassing for Inner Traditions who still market this book as a genuine account, with nary a nod to the plagiarism. Not to mention poor Professor Stuart Harrop of the University of Kent who provides a foreword, Ashé Journal who apparently awarded the title the 2005 Ashé Journal Book Award, and Tori Amos who sits atop the cover of the book testifying that after reading it, she felt she “had been initiated into the ancient feminine mystery of sacred sexuality.”

Even without this plagiarism, there’s much that sets off the ole bovine excrement detector within the pages of The Shamanic Way of the Bee; or outside too, if you count Buxton doing his Robson Green impression in the author photo on the back cover. Bridge and the eerily similar Herr Professor before him are both bog-standard wise old men tropes: enigmatic, venerable and well-travelled with a twinkle in their eye and a subtle hint of power, equal parts Dumbledore-Gandalf-Kenobi-Merlin-Miyagi and, of course, Don Juan Matus. Buxton, meanwhile, plays the part of the standard earnest but gormless initiate to a T, soaking up knowledge while gazing in wide-eyed, Castenada-style admiration. Even Buxton’s diminutive title of Twig recalls the youthful Arthur being called Wart as he is trained by Merlyn in T. H. White’s The Once and Future King. Similarly, the Mellisae are the kind of thing you would expect from pellucid male wish-fulfilment fantasy, all remembered in exquisite, clinical, autopsy-like detail: there’s the raven-haired, dark-skinned Vivienne who is comically and without a trace of self-awareness (or self-preservation) referred to as “a true daughter of Egypt;” then there’s Devorah of the perfect proportions and full hips which are “emphasized by their strong, easy swing when she moved around the table.”

The Shamanic Way of the Bee somewhat trails off after a few more gruelling trials, bacchic rituals and cavorting with the Melissae, ending with the death of Bridge. Ultimately it doesn’t provide much insight into what this most ancient and enigmatic branch of shamanism features, other than bees are cool and there’s sexy bee priestesses out there happy to help young guys become, I don’t know, better beekeepers. 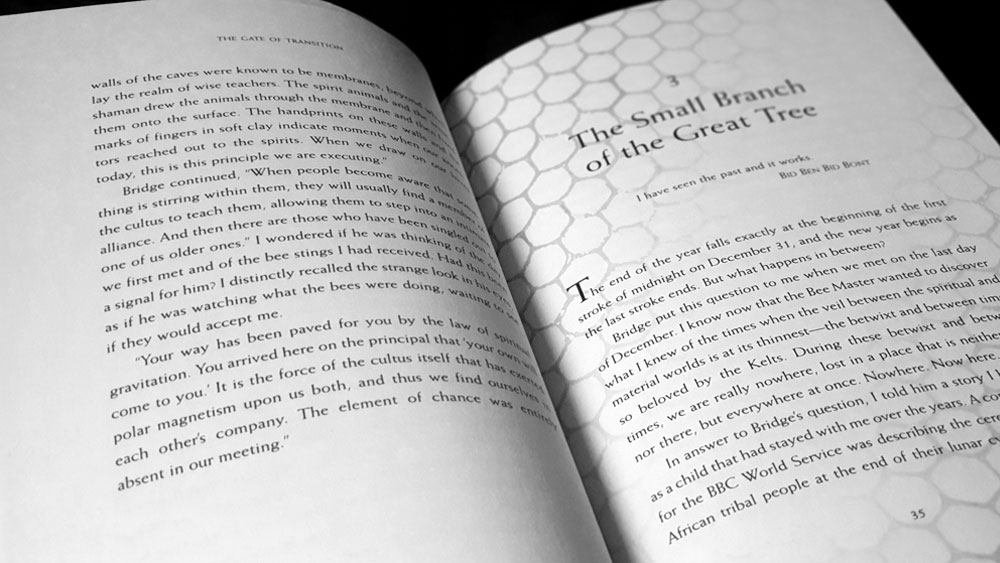 The Shamanic Way of the Bee features a cover design by frequent Inner Traditions hand Cynthia Ryan Coad, with the title and a bee motif drop-shadowed in a banderole above a honeycomb pattern. The interior was typeset by Rachel J. Goldenberg with everything, both body and titles, in a single-weight Weiss serif face, giving the copy an ever-so-slightly more ornate feeling than would come from your usual choice of serif. The first page of each chapter reprises the honeycomb pattern seen on the cover as a slightly overwhelming background image, shot through with a feathered gradient behind some of the text for a smidgen more readability.

One Response to The Shamanic Way of the Bee – Simon Buxton