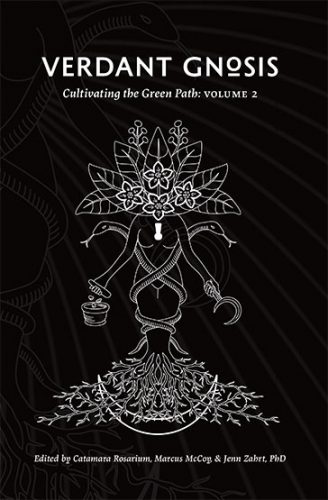 Sub-subtitled “Selections from the Viridis Genii Symposium,” this work from Rubedo Press does exactly that, compiling written contributions from various speakers at the 2016 Viridis Genii symposium. As a sequel to a similar compilation from the inaugural event in 2015, Volume 2 builds upon a successful formula: specialised considerations of various plants or their application, which presupposes a certain level of expertise or familiarity; although this volume is sadly absent the spectacular illustrations by Maxine Miller that graced its predecessor.

Dan Riegler of Apothecary’s Garden provides an introduction that acts as an opening address. It gives a sense of where things might head in this volume, with something of a new age, blossoming consciousness, righting the wrongs against the earth type of vibe, rather than anything slightly grimmer and more path of poisons that the more darker inclined amongst us might prefer. Mr Veneficium himself, Daniel Schulke, puts things back on track, though, with the opening piece, Transmission of Esoteric Plant Knowledge in the Twenty-First Century, an excerpt from his recent Thirteen Pathways of Occult Herbalism. As the characteristically verbose title suggests, it is by no means entirely concerned with poisonous plants, instead providing an overview of various methods of receiving plant-related knowledge. Schulke surveys historical examples of this communication and proposes several future models.

Whilst Schulke’s consideration is a broad one, most of the contributions here are focused on a particular plant, or a rather specific category. Corinne Boyer considers funerary trees with a consideration of trees associated with death from across a range of cultures, followed by some suggestions for practical application. Jesse Hathaway Diaz’s Man-Dragon, Man-Root and the Witch looks at mandrake and its analogue ginseng, with an emphasis more on the latter than the former.

A strong experiential focus is found in John Keyes’ Devil’s Club: Sacred Cascadian Medicine, in which he discusses the Oplopanax horridus of the title, a large understory shrub endemic to North America’s Pacific Northwest. Despite its use by indigenous peoples including the Tlingit and Haida, Keye forgoes much reference to them to avoid any suggestions of cultural appropriation, and instead refers to his own practice. This results in a largely anecdotal piece, but one which reads well and is without too much in the way of hyperbole and claims of cure-alls; more about such things imminently.

Elsewhere, Karl Feret presents a general discussion about the mystical properties of trees, emphasising the importance of choosing the symbolically appropriate species for particular magical working or intent; something he feels is lacking emphasis in much ritual work. A similar area is considered by Jenn Zahrt whose sympathetic correspondences are of the astrological variety, discussing how particular planets rule particular plants. Perhaps the most intriguing title in this collection is Urtica Dioica’s On the Importance of Keeping a Poison Garden, although he tempers the excitement in the first sentence, removing my vision of a cottage immersed in belladonna, hemlock and foxglove. Instead, the poisons are entheogens, poisonous in the sense that they will kill the ego, but mercifully, other than san pedro, the few plants considered here are none of the usual suspects, preferring instead reed canary grass and prairie mimosa. 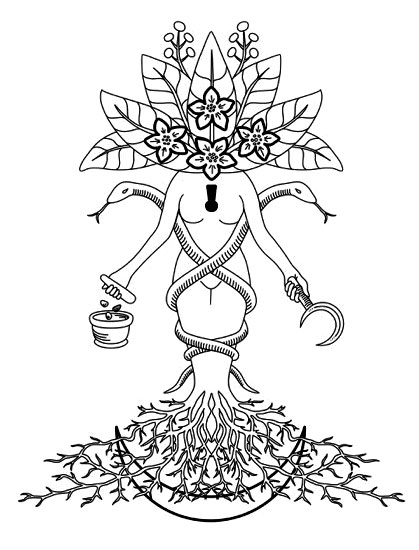 Given the theme with which this book concerns itself, sitting at that intersection between mysticism and science, there are inevitably areas where scientific rigour loses out to either unverified personal gnosis (which is fine in matters mystical), or the rather less forgivable unverified statements of unsubstantiated fact. One piece on Baltic amber begins to grate with its woolly thinking, gratuitous claims and references to scientific studies that aren’t actually referenced (if you’re going to call on the authority of the scientific model, then at least cite in an academic manner). History is treated in a broad, cavalier attitude with the ancient Chinese included in a list of peoples who prized and used Baltic Amber before the Common Era, suggesting that the Amber Road that transported amber from North Baltic seas to the Mediterranean must have had a couple of lesser known and really, really, really, long scenic routes. The most egregious thing, though, is a bald statement that, whilst studying at Kraków University, the astronomer Nicolaus Copernicus wrote a graduate thesis “on Baltic amber’s potent healing properties.” This is a staggering claim, given that Copernicus, one of the fathers of the Scientific Revolution, was studying astronomy at Kraków, not new age woo, and it is a claim for which no reference is given and no corroboration can be found. The only online instances of the claim are the author’s own version of this article and a similar one by another author who has either copied substantially from this piece, or is the victim of this author’s cribbing. Naturally, by the time the miraculous health benefits of amber are up for discussion, the ship of credibility has well and truly sailed and the bovine excrement detector starts flashing at claims that “Baltic amber has been verified scientifically as an adaptogen.” Of course, there’s no citing of when this verification occurred, let alone any explanation as to how something can be scientifically verified as a thing that itself is hardly an accepted scientific principle. What next? Something scientifically verified as a potent homeopathic remedy?

This might seem a bit harsh, especially given that this is a book that also includes discussions of astrology and talking to plants. But there’s a difference between that kind of magickal paradigm-building (where it’s all wibbly wobbly, wistical mystical stuff) and matters that are slightly more tangible, like life-threatening diseases. It is deeply problematic, irresponsible and intellectually dishonest to present amber as a miraculous panacea capable of seemingly treating everything, including multiple sclerosis and Parkinson’s disease. Got a baby with epilepsy or colic? Sling some powered amber under their tongue. Oh, and amber can also apparently act as a “protective shield from radiation” which is pretty awesome; so much nicer and more natural than those cumbersome suits. And then, following a snide, and thoroughly predictable, aside about pharmaceutical companies not creating new antibiotics because they’re too busy with their cool and profitable Viagras and Zolofts, Baltic amber tincture is confidentially predicted to play a role in the future, fighting antibiotic-resistant superbugs. Extraordinary claims one and all, and extraordinary claims require extraordinary evidence, of which there is none here; not even of the next to useless anecdotal variety.

This excursion into uncritical amber woo highlights the problem inherent in this field, and, one supposes, in occultism in general. When it comes to matters quantifiable, one is better to err on the side of credible data, lest one looks like a fool. This is particularly true when we are dealing with constituent materials that are, shall we say, made from Teh Science. Of all areas of mysticism, this is one in which the tools and materials can be defined, understood and measured in a scientific manner, as can their effects; or not, as in the case of geriatric tree resin. To throw that model aside in preference of wishful thinking and recycled website claims is to leave oneself, and one’s associates, open to ridicule. This is the case here, where this less than stellar contribution ultimately tarnishes the whole book, reflecting poorly on the editorial decision to include it in all its irresponsible glory.