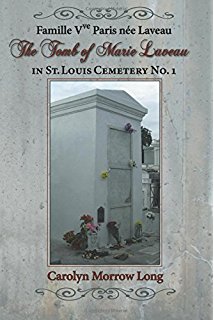 It’s hard to imagine that a book about a single tomb would be a very long one, and that is certainly the case here, with this work stretching to just 120 pages, half of which consists of endnotes and an appendix. The tomb in question, known as the Widow Paris Tomb, is that of Marie Catherine Laveau, famed as the Voodoo Queen of New Orleans. As the introduction notes, earlier versions of this text have previously appeared in an online incarnation at knowlouisiana.org, and in print through New Orleans Genesis, the quarterly journal of the Genealogical Research Society of New Orleans.

Carolyn Morrow Long has written about Marie Laveau before, but this smaller volume doesn’t provide much about her specifically, instead using the device of her tomb to look at her various family members and descendants. There is a brief introduction to Laveau early on, with an attendant and equally brief summary of New Orleans Voudou. Both of these set the scene and provide context for the devotional use of the tomb, which in the past has been festooned with X marks from supplicants.

The Widow Paris Tomb does not just contain the body of Laveau and has been the place of rest for 84 people in total. This is possible due to the nature of New Orleans tombs, in which the structures can house the bodies of multiple internees, with the bones of earlier occupants being pushed to the back or into a lower vault after a period of decomposition when more room is needed. If one believes in the power of the blessed dead, this makes for a powerful magickal image, with the idea of all these bones and their attendant spirits, housed within these compact, battery-like domiciles.

This image, appealing as it is, doesn’t quite hold up with what is presented here, though, due to the way in which the book studiously documents each of the internees, meaning that these blessed dead quickly becoming the mundane dead. Long exhaustively explores records to give a history for each person said to be interned within the Widow Paris Tomb, and given the funereal capacity in question, one promptly begins to lose track of the many names.

As a small book about such a specific subject, there’s not much more that can be said about The Tomb of Marie Laveau in St. Louis Cemetery No. 1. It very much is what it is: a book detailing a grave and its occupants. It is well written, with a geeky embracing of cemetery and other public records, but this minutiae is more digestible when summarised, rather than painstakingly documented. From these summaries, one is reminded of the high mortality rate of yesteryear, with so many children dying of ailments that are longer fatal, or in some cases, heard of today. Number one take away fun fact: some internees were renters, whose bodies were only meant to stay in the tomb for a year but invariably ended up becoming permanent residents.

Published by LeftHandPress, a division of Black Moon Publishing, LLC, and printed by Lightning Source, The Tomb of Marie Laveau in St. Louis Cemetery No.  is competently laid out with black and white photos scattered throughout.