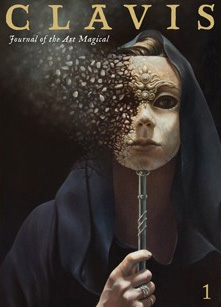 There seems to be a veritable explosion in the publishing of occult journals and magazine at the moment, something that is heart-warming in this digital world we live in. Clavis 1 marks the entry of Ouroboros Press and Three Hands Press into this field, and as you would expect, especially from Three Hands Press, this first issue features high production values: perfect bound with a full colour matte cover, heavy stock for the 80 internal pages and several full colour illustrations. And if that’s not enough, there also a deluxe edition, bound in full antiqued olive kidskin with handmade endpapers and limited to 125 copies.

Despite a wide ranging thematic ambit that welcomes almost every credible stream of contemporary magick, there is a strong emphasis throughout this first issue on matters relating to Sabbatic Witchcraft. This is perfectly illustrated by arguably the two strongest contributions to this issue, those from co-editor Daniel Schulke and from Sussex-based writer Martin Duffy. In Diablo Stigmata, Schulke explores the role of the Devil’s Mark in the lore of the Witches’ Sabbath, said to have been placed by the Devil on the bodies of his followers. Schulke uses his exploration of the Devil’s Mark to touch on other tangentially related elements of Sabbatic lore (such as fairy sabbaths) and other esoteric marks and identifiers, like the similar Mark of Cain.

Martin Duffy’s One Beyond Twelve: The Thirteenth Spirit, Judas and the Opposer is an exhaustive consideration of the figure of Judas Iscariot in folklore and sabbatic witchcraft. Judas emerges as a New Testament version of the Opposer, a latter day Cain to the Abel that is Jesus, or a Set in conflict with his brother Osiris. In many ways, this piece felt like a revelation, moving Judas away from the stereotypical, one-dimensional figure of evil Christ-killer and showing the esoteric relevance of almost every element of his story. As the scapegoat to Divine Will that saw him hung from a tree, just as his twin had been from atop Golgotha, Judas echoes both the fallen angel Azazel, bound in the desert by hand and foot as an expiator of sins, and another fallen angel, Shemyaza, who was hung inverted in the constellation of Orion.

Both Duffy and Schulke’s piece are a joy to read, being able to discuss matters that reflect, we hope, an authentic magickal praxis, but one which is authoritatively and, most importantly, lucidly written. The same cannot be said for Johnny Jakobsson’s Nebiros et Ars Necromantica. Presenting a lengthy exploration of, um, something, Jakobsson’s approach is clearly informed by the Kenneth Grant school of dense and unfathomable occult writing. Words upon words are piled into sentences like a far too rich chocolate gateau, with some of the ingredients so obscure I was given pause to wonder if they even existed; and spellcheck seems to share my concern. While it may not sound as cool, there must be an easier way to say: In the guise of tsel mavet, the multitarian twain-headed serpent is the definite sovereign of this alchemic arte of chrysopoetics in the Qliphothic initiation at the graveyard, where its multifarious domains are regally divided into regions. Despite being only 23 pages long, it took several sittings to get through this piece purely because of the giddy hallucination-inducing quality of sentences like: As the hypostatic tripod of the solar shell, the three genii, Mortifaxiac, Horgosat and Miratan, are each magistral mystagogies of the chrysopoetic praxes of the tunnel’s vital emanations into the aureate heart of the ethereal body.

In addition to the longer articles, Clavis features reprints of a number of primary sources that express many of the same themes. Two of these are alchemical texts, one by fifteenth century alchemist George Ripley and the other by Edward Kelley, while another text is the remarkable witches’ invocation to Cain collected by Charles Godfrey Leland in his Legends of Florence. In a similar vein is The Commonplace Book of Francis Grosvenor, an article by Ben Fernee that looks at the notebook of an otherwise unknown 17th century gentleman. The manuscript is a collection of notes on witchcraft, geography and cosmology, with personal reflections that seem to come as a result of the writer’s experience of ecstatic and transcendent states of mind. The point of Fernee’s piece is to highlight the similarity of Grosvenor’ language with that of Andrew Chumbley, drawing comparisons with Grosvenor’s references to the mystique language of the eye & hand  to the Hand and Eye sabbatic formula that Chumbley presents in the first chapter of his Azoëtia.

As well as the historical content, there are also some more practical pieces featured in this issue: Shaddai’s Gate by Frater A.I (a practical exercise for working with the lunar sphere of Yesod) and Beyond the Paths of Frustration: Daath Gnosis by Craig Williams (in which a way of exploring the Nightside using a tantric framework is given). There are also visual contributions from Tomasz Allen Kopera, Rima Staines, Ben Tolman, Joseph Uccello, Tom Allen, Sasan Saidi, and Hagen Von Tulien.

In all, this is a very satisfying debut from Clavis, with a combination of scholarly, visionary and practical content. The quality of the publication is one of the strongest selling points, with an attention to craft that makes the $49 asking price seem, almost, forgivable.

Michael Howard describes this book as both a sequel and a prequel to The Pillars of Tubal Cain, which he wrote with Nigel Jackson. While that book was a broad consideration of Luciferian themes that ranged from Gnosticism to Freemasonry, from Arthurian lore to traditional witchcraft, amongst others, this volume takes a more concise and specific look at the fallen angels of that tradition. In the 1960s, Howard was the student of Madeline Montalban, whose idiosyncratic and Luciferian magickal system differed from that offered at the time by both ceremonial magic and Gardnerian witchcraft. While this book is by no means a strict guide to Montalban’s system, it is clearly informed by her work, and by the course material of her Order of the Morning Star. Howard is also at pains to point out that although he is an empowered initiate of the Cultus Sabbati, and despite some of the similar themes, the material in this book does not necessarily reflect the teachings of that group.

Montalban saw Lucifer as a benevolent being who, like the other fallen angels, had aided the development of humanity, and she referred to him with the inspired alternative name of Lumiel (Latin-Hebrew) or Lumial (Latin-Arabic), meaning ‘Light of God’. Interestingly, Andrew Chumbley received this same name independent of Montalban or Howard, and his Lovers Call to the Angel of Witchblood, addressed to Az’ra Lumial, is included in this book as an appendix.

Howard says that the key to Montalban’s success as a magician was her ability to synthesise Chaldean stellar lore, Egyptian mythology, medieval sorcery, Renaissance magic and Luciferian gnosis. And that is essentially Howard’s approach here too, covering the Fallen Angel and Cainanite mythos from a biblical and apocryphal perspective and then widening the scope by considering these sources in relation to Mesopotamian and other mythological systems, as well as European and Arabic folklore. Howard rarely reaches conclusions or states anything as definitive fact, simply presenting various bits of lore to create an overall picture. This includes the alternative archaeology of Graham Hancock and Andrew Collins, which again, is presented as contributing to the theme but is never entirely embraced; and probably a good thing too given the lack of scholarly rigour to be found in that field.

While not as bad as some of their other releases, this book features Capall Bann’s usual aversion to spell checking and proof reading. On page 47, Samael is, mayhaps, the victim of an unchecked autocorrect when the Cupertino effect turns him into a time-travelling Samuel, making a quote from the Zohar describe how “when Samuel mounted Eve he injected his filth into her.” Later, the angel Metatron is rendered as the somewhat weightier Metraton, and a reference is made to St Jreome. With mistakes like these, and others, being so glaring, it’s baffling that they were never picked up during even a cursory glance. And as is common with other Capall Bann titles, the book has gutters that are too shallow and a tight perfect binding, making it necessary to hold pages wide open to comfortably read them, forever at the risk of having the pages slam shut like some cheaply bound tome from the Unseen University.

Howard’s writing style is amiable and occasionally conversational, as he pulls together the threads of the fallen angel tapestry with a largely credible tone of voice. While these threads are far reaching and wide-ranging, there’s none of that Grantian-style of Boy’s Own anthropology, and his statements are usually reasonably sourced (though by no means exhaustively referenced); there are only a few moments that you go “hang on, that’s news to me, where does that come from?” (and because of that aforementioned tight binding, it’s hard to thumb back through and find the most egregious example). Thoroughly recommended for an overview of matters Luciferian and fallen angelical. 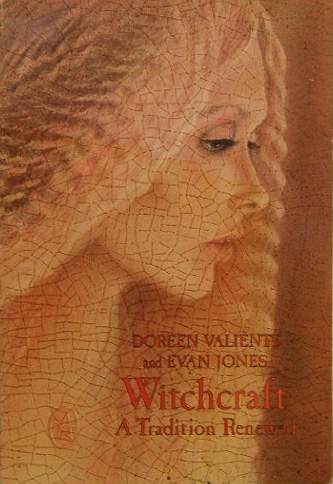