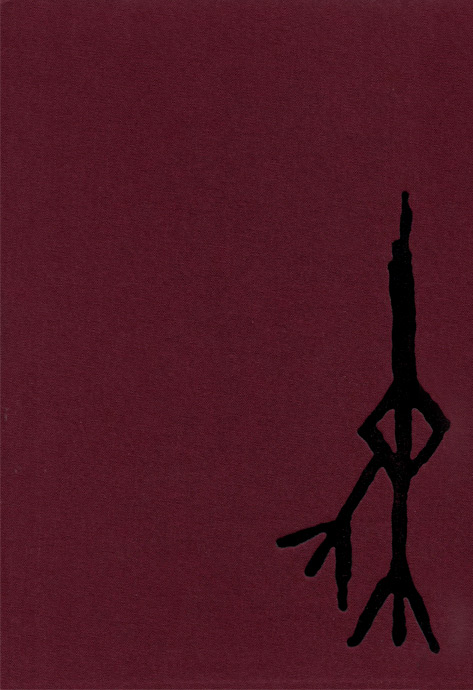 Published by Spanish press Fall of Man, Gullveigarbók is a seemingly little-known consideration of the Rökkr witch goddess Angrboda with, as the title implies, a preference for her name of Gullveig. Given the subject matter, one would expect that the author has come across my writings or those of Raven Kaldera (and other writers published by Asphodel Press), but other than one small passing reference to Kaldera, there is no indication of this. Instead, and as the author’s own name suggests, Gullveig is considered from something of a Temple of the Black Light perspective, with the writing sharing a language and tone similar to publications from that organisation. As a result, there is much talk of anti-cosmic Chaos-powers, with Odin identified as a demiurge of false light analogous to figures from Gnosticism and mythology, who is opposed by the Thursian forces that seek to return creation to the primal state of the void of Ginnungagap. For Vexior, Gullveig and Loki are seen as analogues of Lilith and Lucifer, with Lilith’s exile to the Red Sea being mirrored by Gullveig taking up residence in the liminal Iron Wood and with both goddesses sharing attributes of sexual and procreative independence. The relationship between Gullveig and Loki, as two shape (and gender) shifting male and female halves of a single being, is compared to that of Lilith and Samael, who appear in the Zohar as androgynous twins emerging from an emanation beneath the Throne of Glory.

Taking the theme of Gullveig’s three-fold burning as a pivotal moment, Vexior divides her into three aspects: the queen of the Iron Wood as Gullveig proper, as the witchcraft-working Heidr, and as Aurboða, the mother of Gerda. As this latter identification highlights, this book is heavily indebted to the work of Victor Rydberg, and anyone familiar with his oft-times torturous (but frequently intriguing) thematic and linguistics leaps will recognise much here. Following Rydberg’s lead, Gullveig is identified with Hyrrokin, and with Hljóð, the giant-born maiden of Frigga who was sent with an apple to Rerir, the father of the hero Volsung. 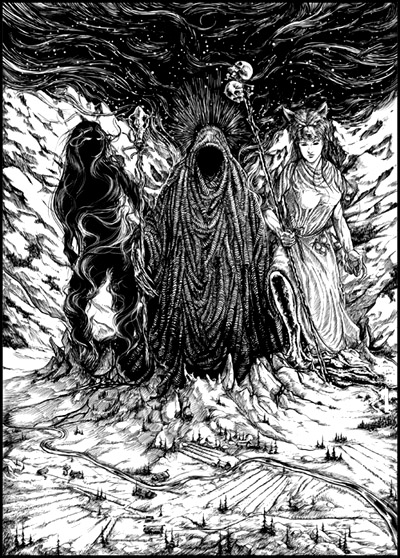 In addition to his consideration of Gullveig in all her guises, Vexior briefly explores Loki as well as the couple’s children, Hela, Fenrir and Jormungandr. Indeed, Vexior sees the three-fold burning of Gullveig as a process that not only divided her into three aspects but sequentially gave birth to this trio.

Following the more theoretical segments that make up the majority of the book, Gullveigarbók concludes with two sections, Fjølkyngi and Ljóð, containing practical exercises for interacting with Gullveig and poetry. Fjølkyngi includes an invocation to Gullveig, a discussion on utiseta as ritual praxis, and a series of sigils (both bind runes and designs more akin to medieval grimoires). Ljóð features poetry and rungaldr, with the poetry effectively illustrating many of the themes of the book in evocative, if frequently bleak, language.

This grim language is something that occurs throughout Gullveigarbók and is a style shared with other anti-Cosmic writings. This is perhaps inevitable given both the Temple of the Black Light and Vexior’s association with metal music, and any chance to use words like black, icy, destruction, wrathful, bestial and of course, anti-cosmic, is gleefully embraced. While many of these properties are, of course, central to this theme, and it would be disingenuous to downplay them, the enthusiastically misanthropic language does come across as, how you say, very metal. In addition to this stylistic quirk, Vexior writes in the first person, frequently giving his personal interpretation rather than employing a distant academic voice, but he quotes primary sources throughout and employs footnotes extensively. The footnotes are styled rather attractively on the side of the page, rather than as actual feet, although in one case, this means that a rather extensive foot, erm, sidenote takes up more space than the main body text as it vertically splits the page in half.

One of the most striking elements of Gullveigarbók are the full page, full-bleed illustrations by Helgorth of Babalon Graphics. Because Helgorth is primarily a designer of covers and logos for metal bands, his work has a quality that is refreshingly different from the post-Spare/Chumbley icon/stele style of artwork so prevalent in occult publications; of which I myself am guilty. Instead, the detailed pen and ink illustrations have a depth and power that captures the essence of Angrboda and certainly acts as a visual underlining of the tone and language that Vexior employs throughout. Particularly impressive is the foldout depiction of Heldrasil that ends the book, in which the three-fold roots of the World Tree are stylised as heads of Níðhöggr, upon whom Gullveig rides in a silhouetted form.

Gullveigarbók comes hardbound in maroon cloth, printed on 242 pages of high quality heavy paper, with red spot colour titles and headings throughout. A deluxe edition of 62 copies was also available. Both editions are now sold out from the publisher Fall of Man. 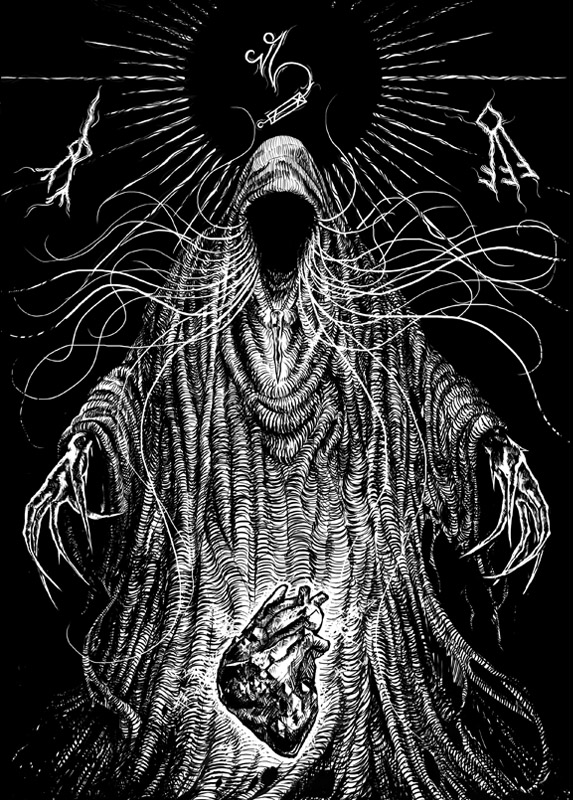