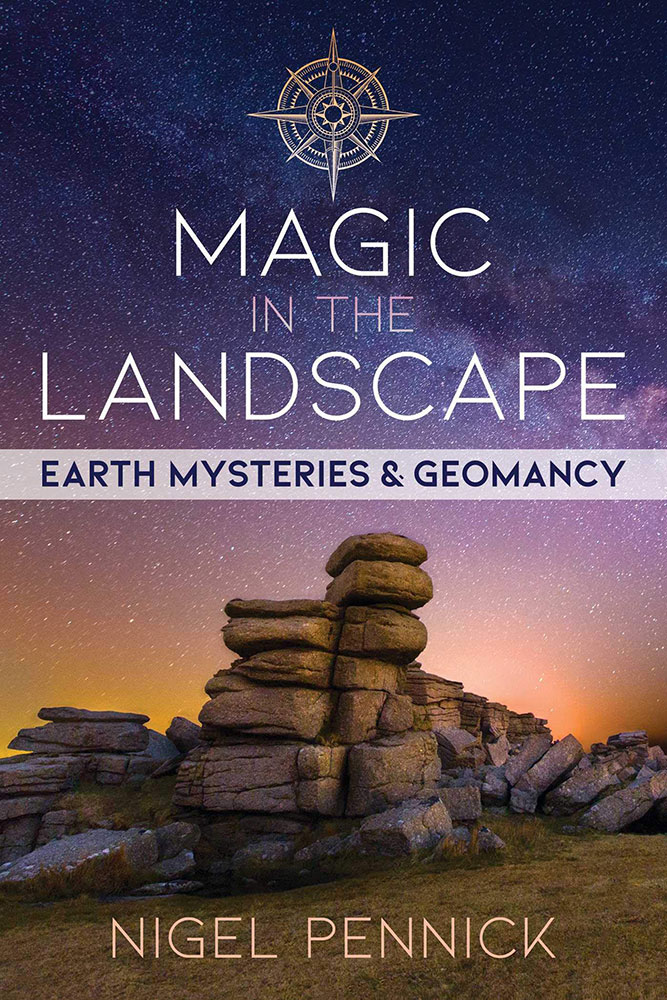 Like other recent reviewed titles from Nigel Pennick, his Magic in the Landscape is a book previously published in the first half of the 2010s by Lear Books, but which is now seeing a wider release with this new Destiny Books edition. Here subtitled Earth Mysteries & Geomancy, one might imagine that it would follow in the footsteps of people like John Michell and Paul Devereux, exploring fairly well worn paths across a magical and energetic landscape. This isn’t necessarily so, though, and instead Pennick takes a more philosophical approach, couching the discussion of real world examples with considerably more musings on the methodology behind this geological magic and a healthy dose of pragmatism.

Pennick begins, a little unexpectedly, with an introduction that acts as a rambling meditation on a range of ideas under the title A Vanishing World in Need of Rescue. This concerns itself not, as the title might suggest, with matters of imperilled environment or encroachments on the ruins of heritage, but rather with temporality, of the pitfalls of nationalist interpretations of the past, and of the permeability and often contrived or manufactured nature of tradition; a pragmatism that, given his career-long focus on various folk and magical traditions, is both interesting and surprising to hear. A similar voice leads into the book’s first chapter, where Pennick gives a brief history of Britain’s rural landscape, mapping out a process of alienation from the land and progressive urbanisation that began with the removal of common land by Parliament at the behest of the wealthy (a process that between 1604 and 1914 saw over 5,200 such Inclosure Acts, affecting 6.8 million acres of land). These acts literally imprisoned and reshaped the land, with new owners maximising its agricultural use by destroying ancient walkways, trees and standing stones, while the peasantry were no longer able to freely work the land as they once had. Pennick notes how the Inclosure Acts later assisted the construction of railways which added still more barriers across the landscape, and incentivised entrepreneurs to build factories and mills in close proximity for ease of transformation, hastening an increasing industrialisation of the land. One might expect this narrative to read like the very worst of Luddism, flailing ineffectively against the modern world,™ but somehow it doesn’t, with Pennick being largely dispassionate, despite his obvious allegiances, and not as, how you say, frothy as others might be. 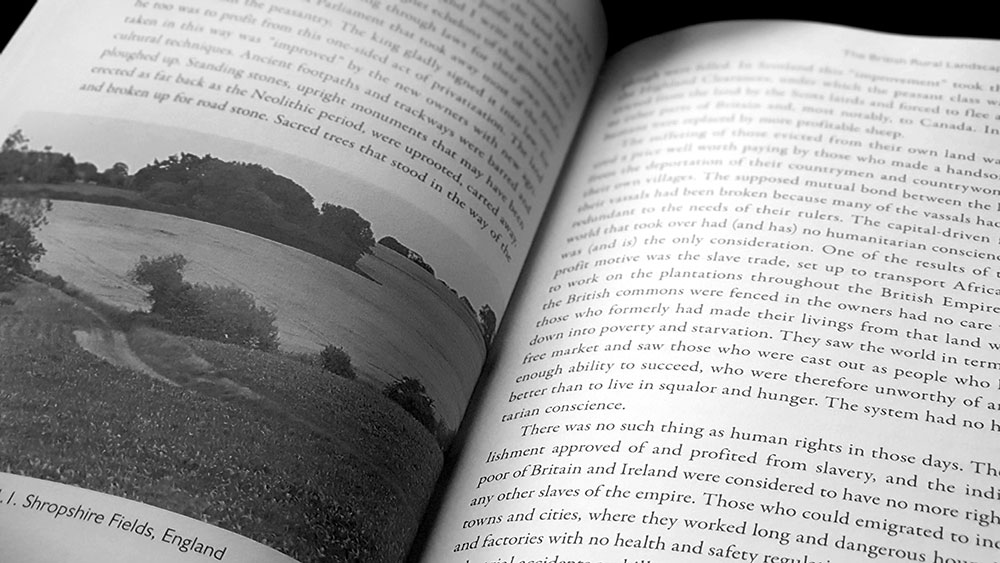 With this thorough grounding in the mistreatment of the land, it is only in the third chapter that Pennick begins to talk about treating it right and turns specifically to geomancy, opening with a discussion of the quaternary division of the land. This begins with the Etruscan’s method of laying out towns and temples centred around an omphalos, following a cosmological principle that Pennick also sees present in the designs of traditional British towns such as Oxford, Dunstable and Chichester.

Pennick quickly moves on to other elements within this magical landscape, shifting abruptly upwards into the heavens with a consideration of the seven stars of the plough Ursa Major, another on direction, and another on the eight winds. This marks something of an abrupt change of style, with the more philosophical and pleasant meander of the first chapters giving way to one in which info dumps are more common. This is particularly so in the chapter on the seven stars, where sentences of abrupt information concatenate together with no elucidatory sinew connecting them. Here, the staccato delivery of single sentence blocks of information create an aberration that contrasts with the more considered and massaged chapters of the book; almost as if someone forgot to turn the cliff notes into a proper chapter. This, mercifully, is a rare case and otherwise Pennick writes with a well-composed tone, displaying a clear editorial voice and calling upon a range of interesting and wide-ranging polymathic gems. 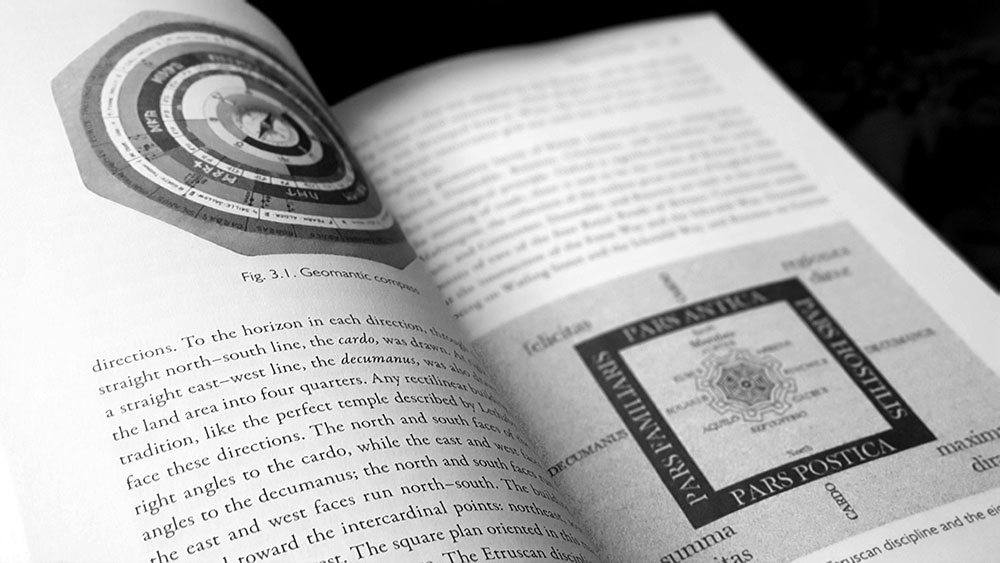 Including a glossary, a bibliography and an index of several pages, Magic in the Landscape runs to a somewhat slight 169 pages, making it feel like a brief read. This is compounded by type that is set in a generous point size, with equally munificent leading betwixt lines, and chapters that are often brief and comprehensively illustrated. Pennick uses these brief chapters to create a brisk pace, moving with each from one subject to another, providing a range of examples in each that are frequently, though not rigorously, cited in text. The primary themes here are ones of boundaries, centres and spaces, with Pennick eschewing much of the more mystical modern interpretations and instead letting the examples and the explicit beliefs attached to them speak for themselves. This is particularly evident in a discussion of the quintessentially ‘earth mysteries’ idea of leys as unseen straight lines that run across the ancient landscape. Building on his 1989 book Lines on the Landscape, co-authored with Paul Devereux, Pennick takes an unyieldingly rational approach, lightly seasoned with a sprinkle of scathing tone, noting that Alfred Watkin’s ill-conceived but appealing 1920s idea of these straight lines connecting archaeological sites was later given a mystical interpretation, one that Watkins himself had never made, when interest in the theory was reinvigorated by 1960s counterculture. John Michell led this charge, particularly in his seminal book The View Over Atlantis, combining Watkin’s premise with ideas inspired by Chinese Feng shui in which paths of energy pass unseen within the land. Suffice to say, Pennick has no time for such shenanigans.

Given the centrality of ley lines in the Earth Mysteries movement and the whole attendant idea of unspecified but mysterious energies flowing beneath the ground, the presence of the ‘earth mysteries’ phrase in this book’s new subtitle seems a little incongruous. With that said, it is interesting that the word ‘ley’ is significantly more appropriate to Pennick’s considerations of space and genii locorum, rather than the idea of ancient energy lines, given that it is an Anglo-Saxon word denoting not a line but a cleared space (from l?ah/l?a?e ‘a clearing in the woods’, and as seen in l?ge meaning ‘fallow’), and Watkin’s problematic choice of the word came solely from its presence as a suffix in the names of several sites along his old straight track. 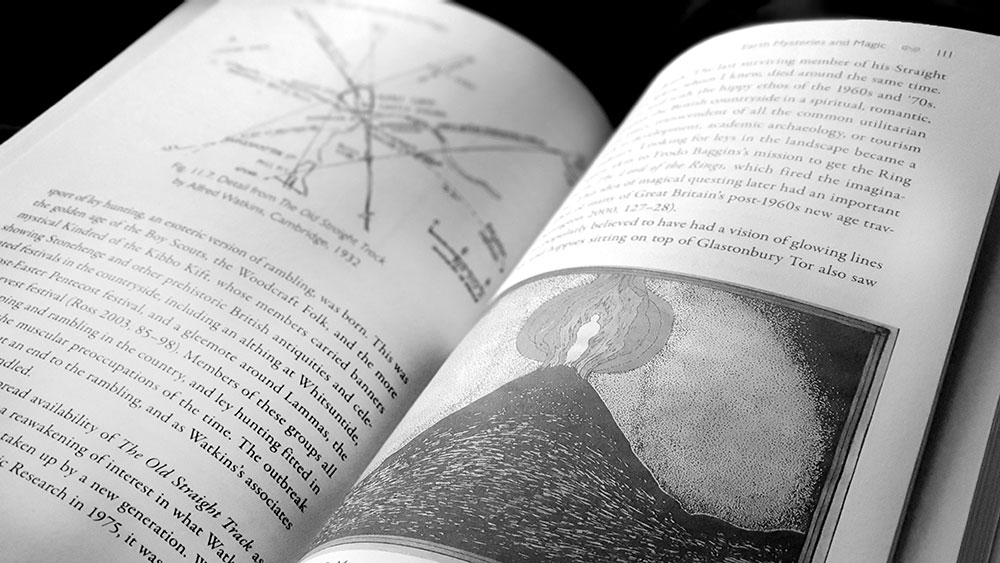 The rejection of energetic ley lines does not mean that there is no spirituality or mysticism here because there is, one that is, if you’ll pardon the phrase, more grounded; and yet also more intangible. Rather than literal but scientifically debunkable energies pulsing through the land, this magic in the landscape is more concerned with alignments and intent, with a simpatico betwixt people and space, where occupancy cultivates a spirit of place. It is this that provides the merit to this book, not chasing saints and dragons across imagined lines of power but rather meditating on the land and how orientating oneself within it provides a way of connecting with the great universe.

Magic in the Landscape is illustrated throughout with photographs of various locations, objects and texts. Text design and layout is by Priscilla Baker, using Garamond for the body and Kiona, Gill Sans and Snell Roundhand as display faces.